I’ve been a photographer for 35 years since I was 11 in fact when I first loaded my Zenith 11 with film and set off for a walk into the wilds of South Yorkshire. 20 years later I turned professional and as soon as digital became a viable option I traded in my Nikon F90x and Mamiya 645 pro for a Nikon digital kit. Digital was for me always a triumph of convenience over real quality in those early years and not much else. It wasn’t until Canon brought out the 5D series that I found myself almost satisfied with the results. I say almost because nothing compares to getting your film out of the tank, holding it up against the kitchen window and seeing all your shots perfectly turned out on a thick, contrasty neg. 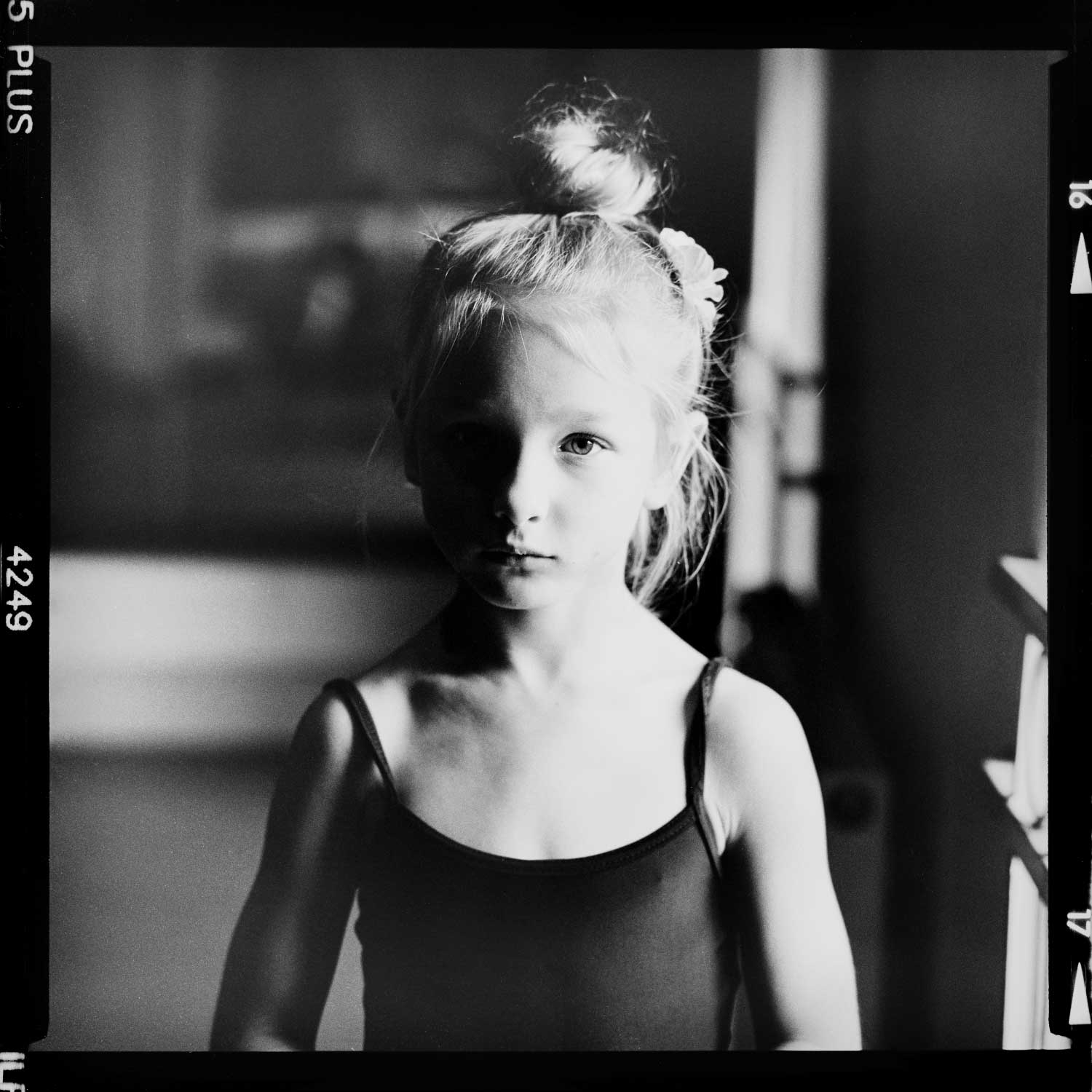 This was my first shoot with the Bronica. Loaded with HP5 I followed my niece to ballet class and shot her side lit against a big diffused window. I love the contrast in this image which is also featured on the Vogue Italia website.

Fast forward to March 2015 and I’m having a restless night. It’s windy outside and my eyes squint to the alarm clock, 3.15am… reaching for my phone I find myself scouring Ebay where I happen across a rather pristine Bronica SQam which I promptly purchase before returning to my semi-slumber. Over breakfast I recall a vague dream where I’d bought a medium format camera, then two days later, a Bronica arrives, neatly packaged with my name on it. Right then, I’d better buy some film. An hour later and I’m in possession of 10 rolls of Delta, FP4. and Pan F. An hour after that and I’m back on eBay buying processing kit and some Ilford chemistry. Two weeks later I’ve bought a Toyo 4×5 monorail and a day after that I’ve replaced my original Minolta X-300 from 1987 with another one, probably, also from 1987. Uh Oh.

And that was how I got back into film. 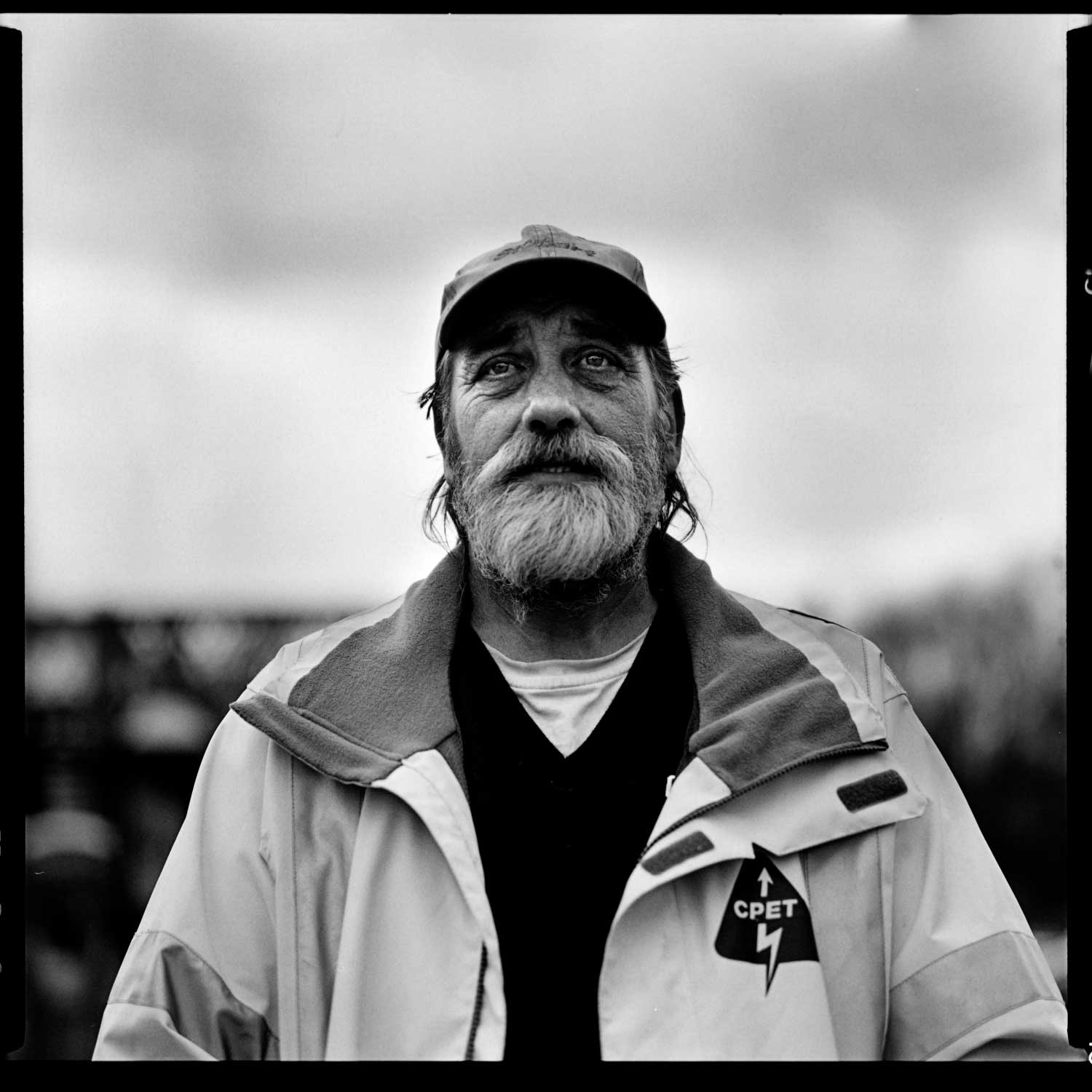 This guy was a lineman at the local heritage railway. FP4 developed in Ilfosol 3 and the contrast is just perfect for me.

In my professional capacity I shoot fashion and portraiture and although most of that is on digital, I do have a couple of clients who have asked me to shoot a few rolls during the course of a day. The thing with film is people who get it, really get it. For me film was a cathartic thing, I was losing my love for photography and I knew it. This thing, this desire to photograph stuff that had burned within me since 1981 was waning and I didn’t like it. Film took me back to that day when I first loaded the Zenith and just set off on foot and with no agenda, no real expectations, just a camera and probably a penguin biscuit. 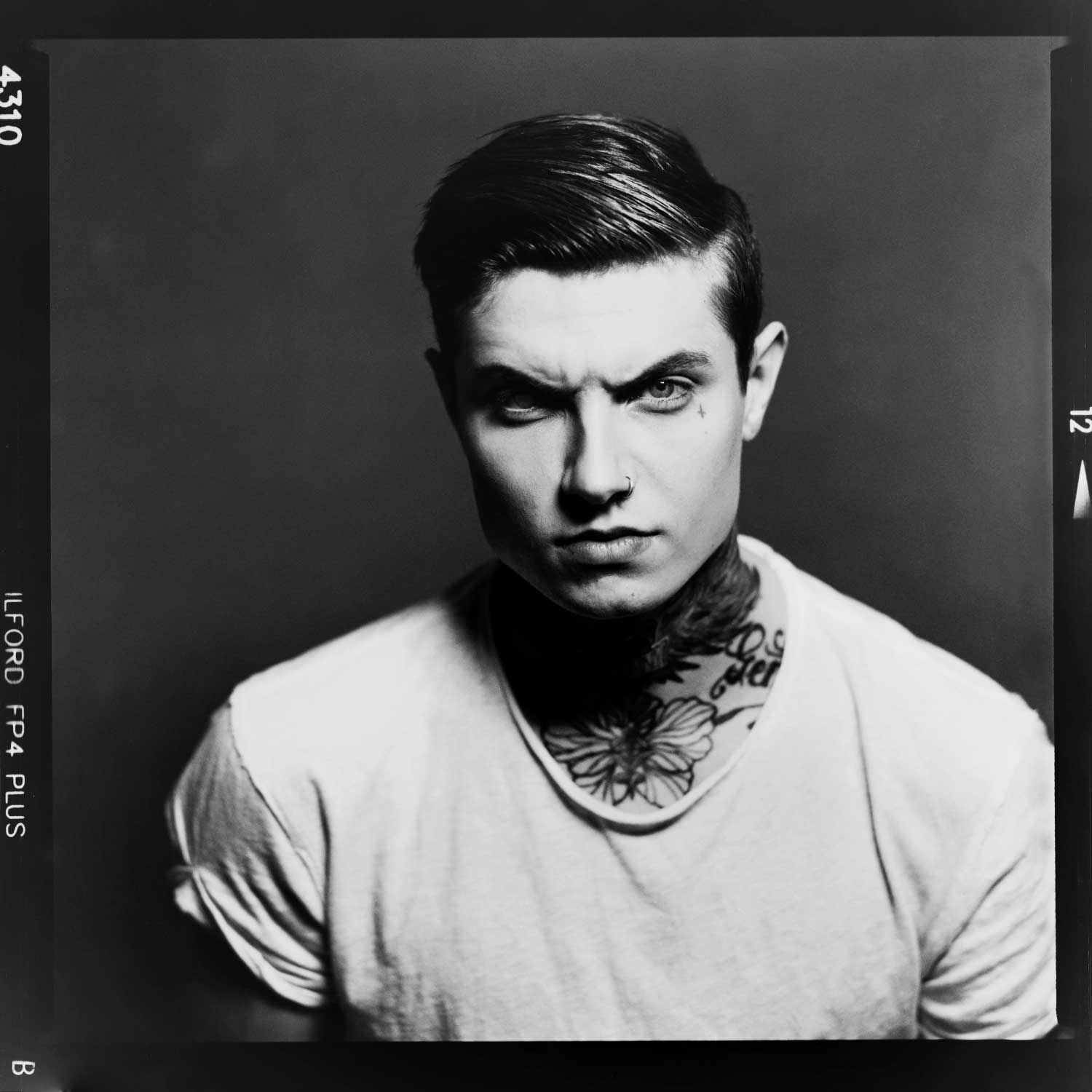 Shooting models for their book means I get time to experiment so with the Bronica loaded with FP4. I managed to shoot a roll in between outfit changes, out of everything we shot that day these are the shots his agency loved the most.

I work in exactly the same way today, I put a camera in a bag, some film and just walk. Sometimes I don’t get the camera out but increasingly more often than not I come back with at least something I like. Portraits are my first love and film helps me connect with a subject like digital never can. When I shoot fashion on digital, people want to see the shot instantly and it affects the flow. It affects how I interact with the subject and it’s detrimental to the end product in my eyes. With film you don’t get that, they know they can’t see it so they’re concentrating on me, and me on them. 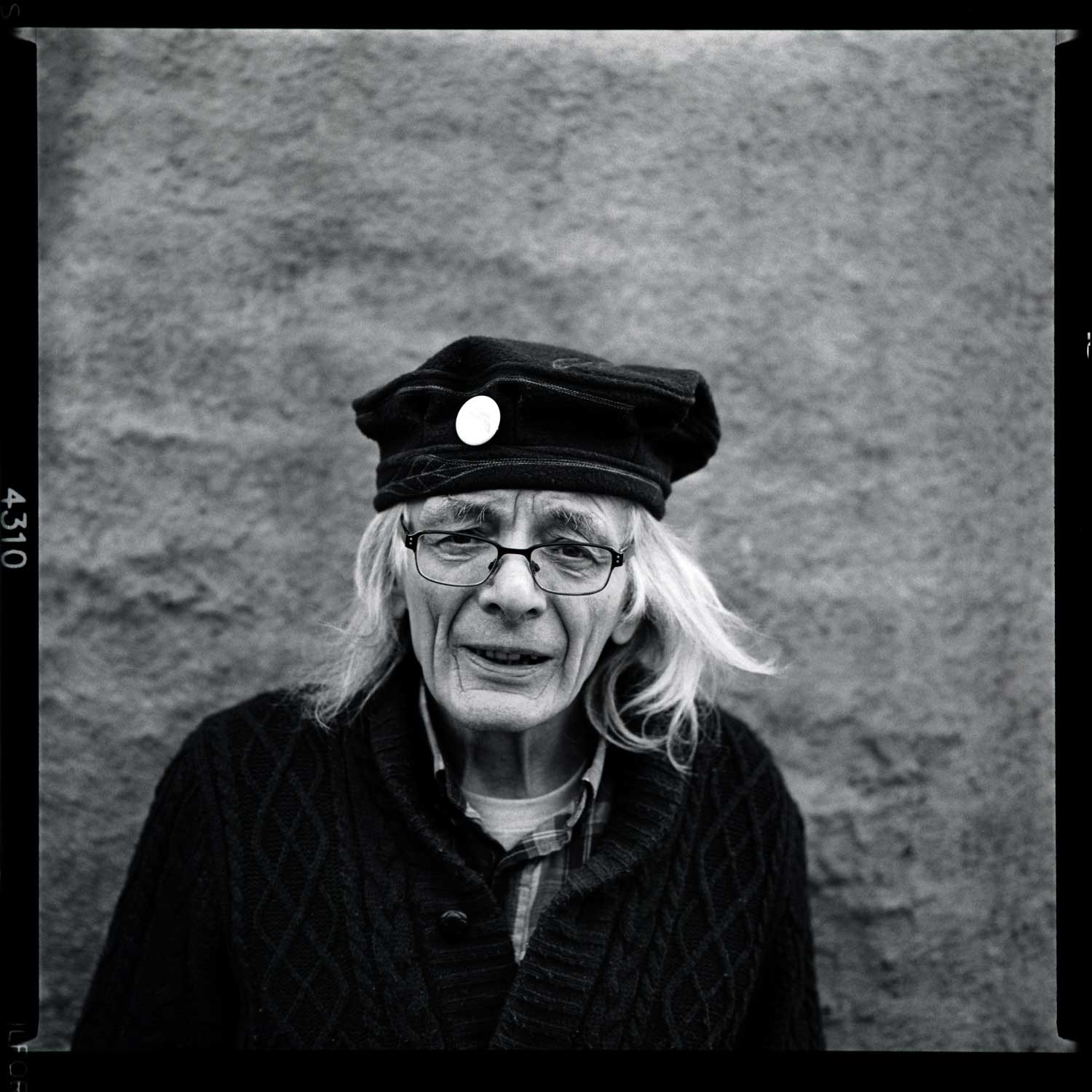 Street shooting with Ilford FP4. I came across this artist walking through Sheffield. As I stopped him he commented on the camera, straight away we had a connection, because of the camera. That doesn’t happen with my 5D.

Ilford Delta 100 and FP4 are my films of choice for portraiture. The tonal range handles skin in a way that pixels just can’t. Another thing about shooting medium format, particularly 6x6cm is it’s such a bizarre format for portraits but it really works. Sadly the Bronica despite being amazingly sharp was proving temperamental so that was swapped for an RZ67 ProII kit. 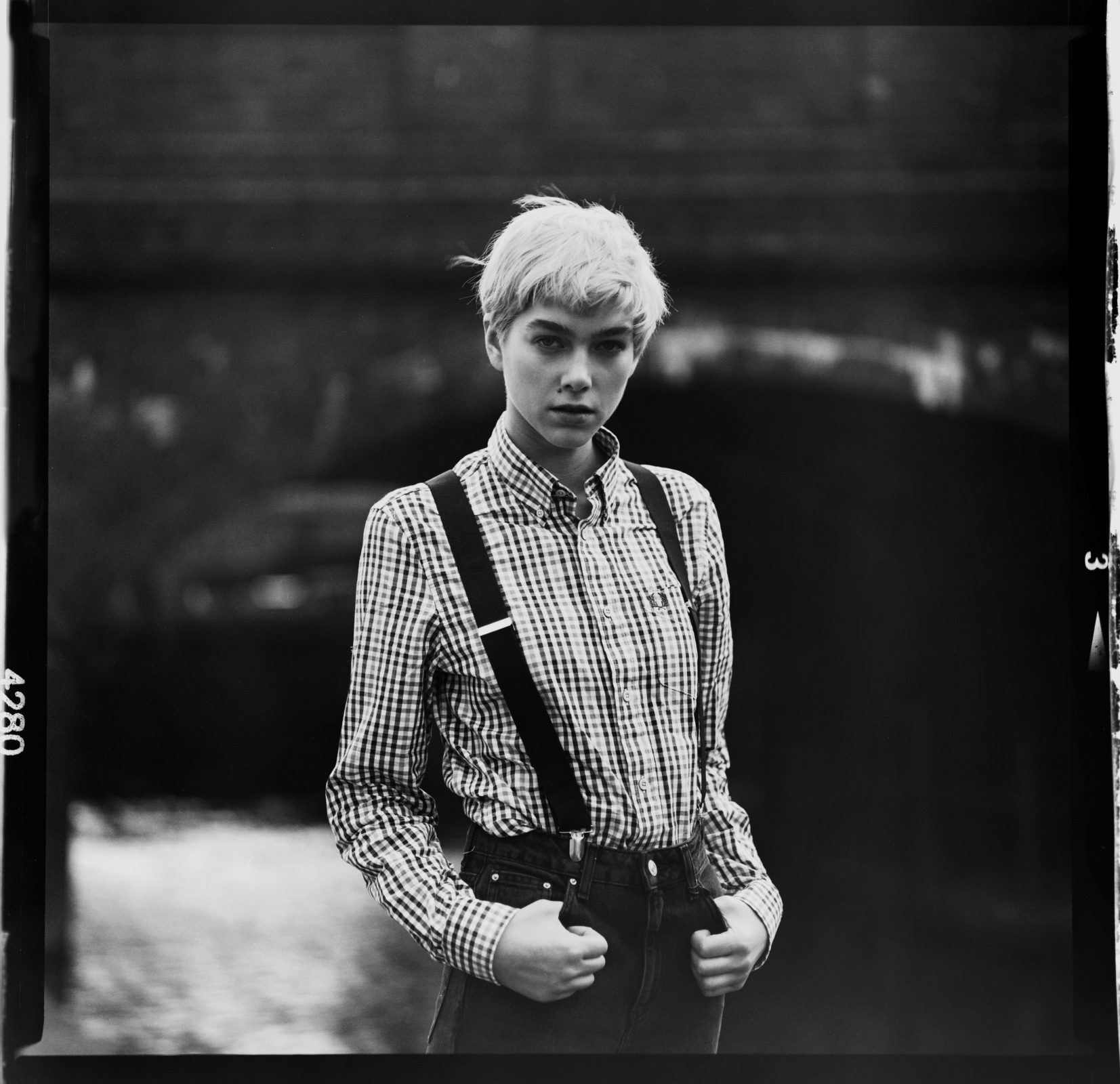 Ilford Delta 100 Pro. Film handles highlights in a way that digital just can’t. Here Sophie is backlit and despite having white hair, detail is still there.

Getting back into film has given me my love for photography back, even in my professional capacity. I’ll always shoot film now no matter what comes out of Japan or how many pixels it has. Over the next few months, I’m going to be experimenting with developers and film speeds just to see if I can tailor a look specific to my own work so I’m fairly excited by what’s to come. I’m also working out how to buy a Leica M6 but that’s a story for another time.

Professional photographer for over ten years, I now specialise in fashion and portraiture. Being based in the North I tend to do a lot of E-commerce work for fashion companies. Portraiture is my first love however and I do quite a bit of theatre work which has given me a chance to work with various personalities of the acting world including Richard Wilson, James Norton, and Simon Callow.

I’ve also written for a few photography magazines over the years mainly Photography monthly, Turning Pro and Professional Photographer in which I had my own column. A selection of my work is featured on the Vogue Italia website as well as Art+Commerce in New York. I’m at my happiest behind my RZ67 with a few packs of FP4 in my bag.

ILFORD PHOTO offer the biggest range of black & white films on the market today. While this is perfect for...
Read More