Lifelong love of black and white

Growing up in the late fifties and sixties, one of my favourite movies was The Day the Earth Stood Still, a lot of which was shot at night in black and white. That early exposure to film noir inspired a lifelong love of black and white photography, especially at night.

When I first started shooting pictures in 1967, though, the only option for night photography without a tripod was “pushing” 400 ASA film and using specialized developers. While what was essentially underexposing and overdeveloping provided satisfactory images, they weren’t always gallery fine art quality.

The advent of higher speed films such as Ilford’s Delta 3200 that can be processed in normal developing chemicals typically on home darkroom shelves has made it easier for film photographers who want to keep shooting after the sun goes down. So, when I took a ten-day photography trip to Paris, I brought along a few rolls of Delta 3200, which I had wanted to try for a long time.

As I walked to the RER station to take a train to where I could capture the Eiffel Tower in the distance at night, I came upon a classic Mercedes-Benz convertible parked outside Brasserie d l’Isle Saint-Louis. The owner and his companion came out and circled around, making for a more interesting image. Having seen a suggestion on the web that Delta 3200’s native speed is EI 1600, I was able to shoot 1/30th of a second with the lens wide open at f1.4 using EI 1600 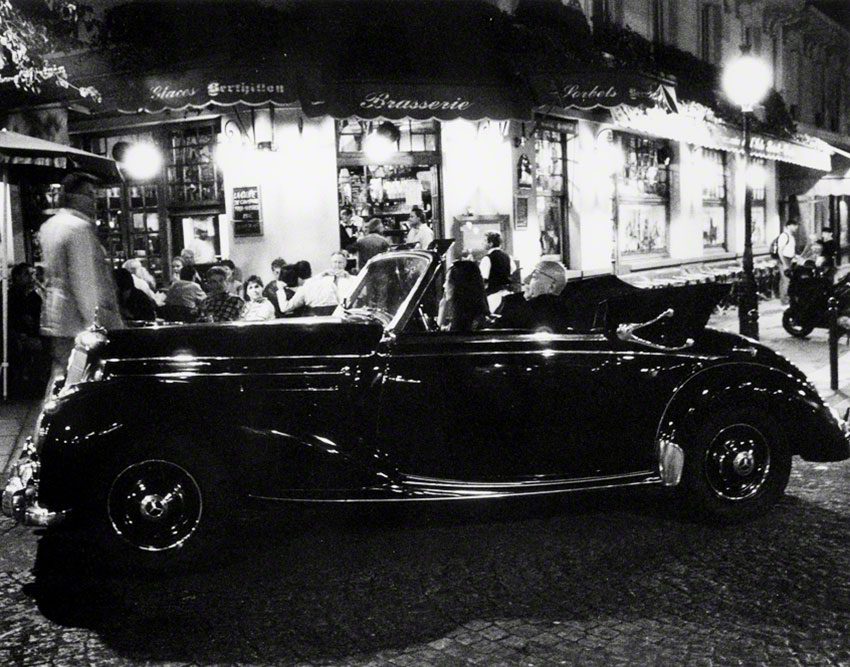 Toros Lab in Paris (it’s now in Bry-sur-Marne) developed the film. During a later Paris trip, I learned they use straight D-76 to soup everything. After returning home, I made several 8 x 10 and 11 x 14 enlargements. I was very pleased with how finely Delta 3200 renders the detail of the car’s grill, even at 11x14.

While working on a project about Eddie’s Grill, a hamburger stand back home. Delta 3200 again allowed me to make a memorable film noir image. Using straight D-76 provided negatives of the Bel Air cruisin’ Geneva on the Lake that printed at about the same exposure time I used to print the negative of the Mercedes-Benz. 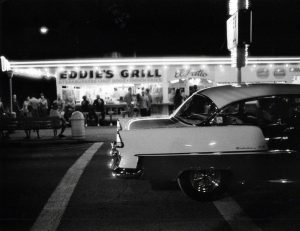 Printed on Ilford Multigrade fiber-based glossy paper, these negatives provide the rich blacks, smooth tonal gradation, and “glow” that make working with film and printing in a wet darkroom worthwhile.

Bob Soltys has been a photographer and writer since 1971, when the local paper bought his pictures of a student protest march in Gary, Indiana. A former Navy officer, he is the coauthor of A Lucky Life about Lucky, his Jack Russell Terrier, www.ALuckyLifeBook.com. Bob’s photos are on the web at www.BobSoltys.com and on Twitter at BlkWhiteFilmPix.