If we go back to 2002 a close photographic friend convinced me (against my better judgement) that film was a thing of the past, and that to hold my own in the professional photographic world I had to go digital. Eventually I succumbed to his argument and traded in my Leica film cameras (I had 4) and started on the dizzy road to digital photography.

In those days some fifteen years ago I thought it would be just like changing film brands: OK it may take a bit of getting used to a different colour balance but otherwise no problem at all. How wrong I was, and as I was shooting three weddings some weeks back then I had little time to learn. I reassured myself that I would be saving myself a fortune on processing even though my first 1gB card cost a staggering £240. Again how wrong I was because as cameras improved and software got better, I spent as much if not more.

The big plus point of the digital world is, of course, that my work gets viewed by thousands of people every week, and is available for purchase worldwide. You of course would not be viewing this blog if it were not for the digital world, and I would not be writing it sat in my favourite café drinking coffee. 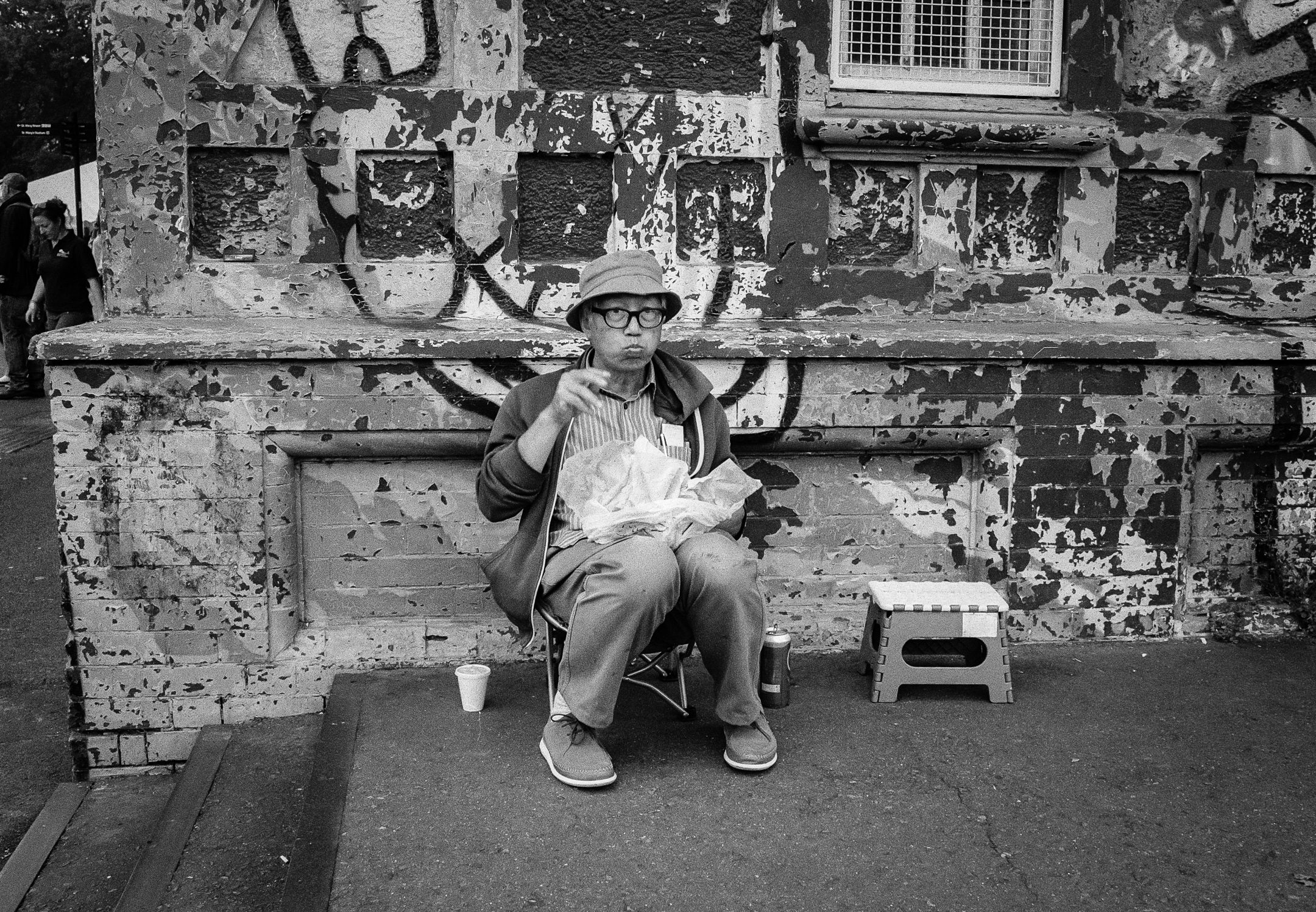 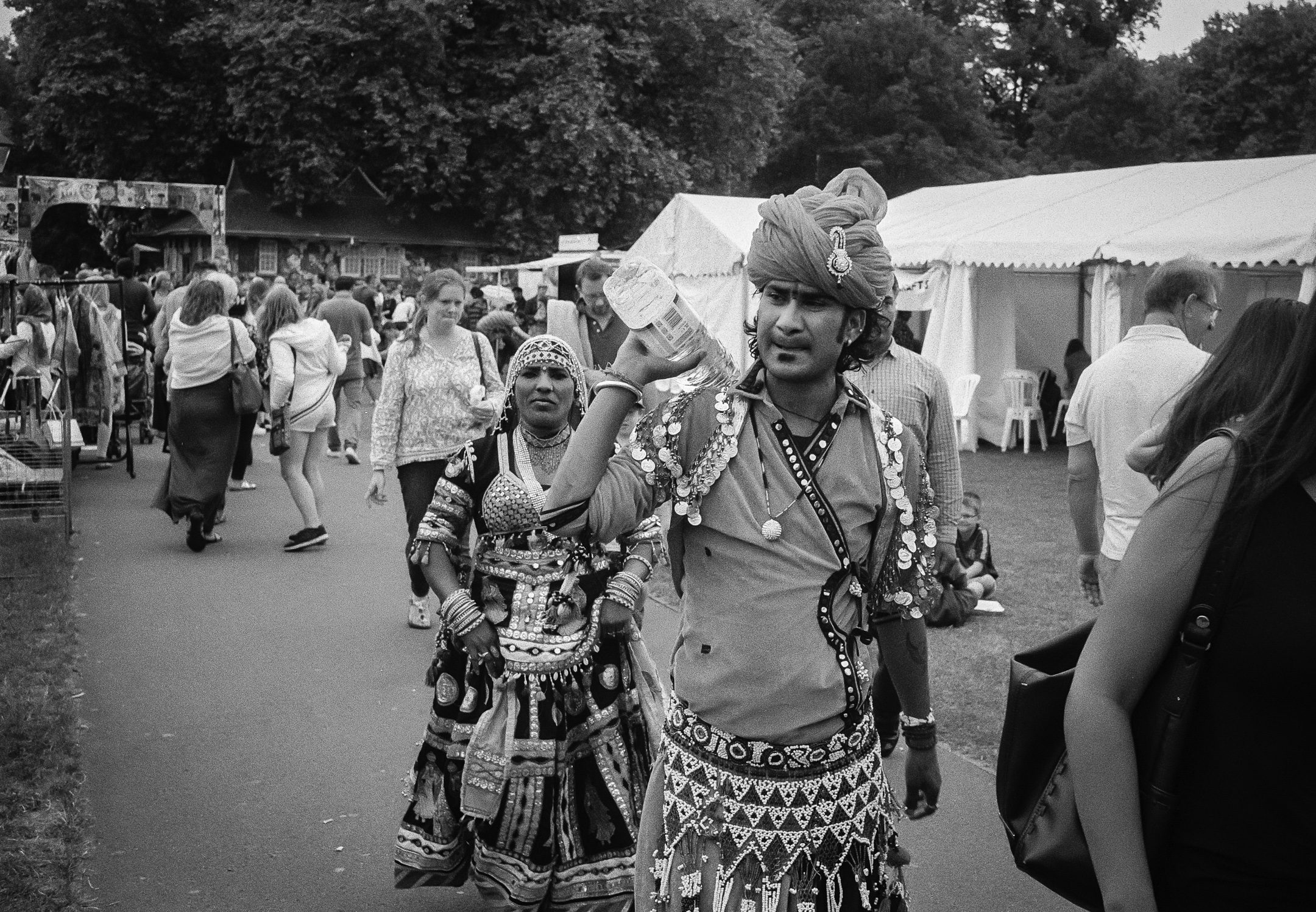 I am now very happily, and finally, back shooting 100% Leica now that I am semi-retired and shooting stock and self-motivated projects, so that makes me more comfortable, if somewhat less well off!

So why have I now also gone back to shooting many of my images with film – a retrograde step some would argue?

WARNING – this is where you have to get into the mind of a photographer who started shooting black and white street photography some 50+ years ago. I am going to talk about pre-visualisation. 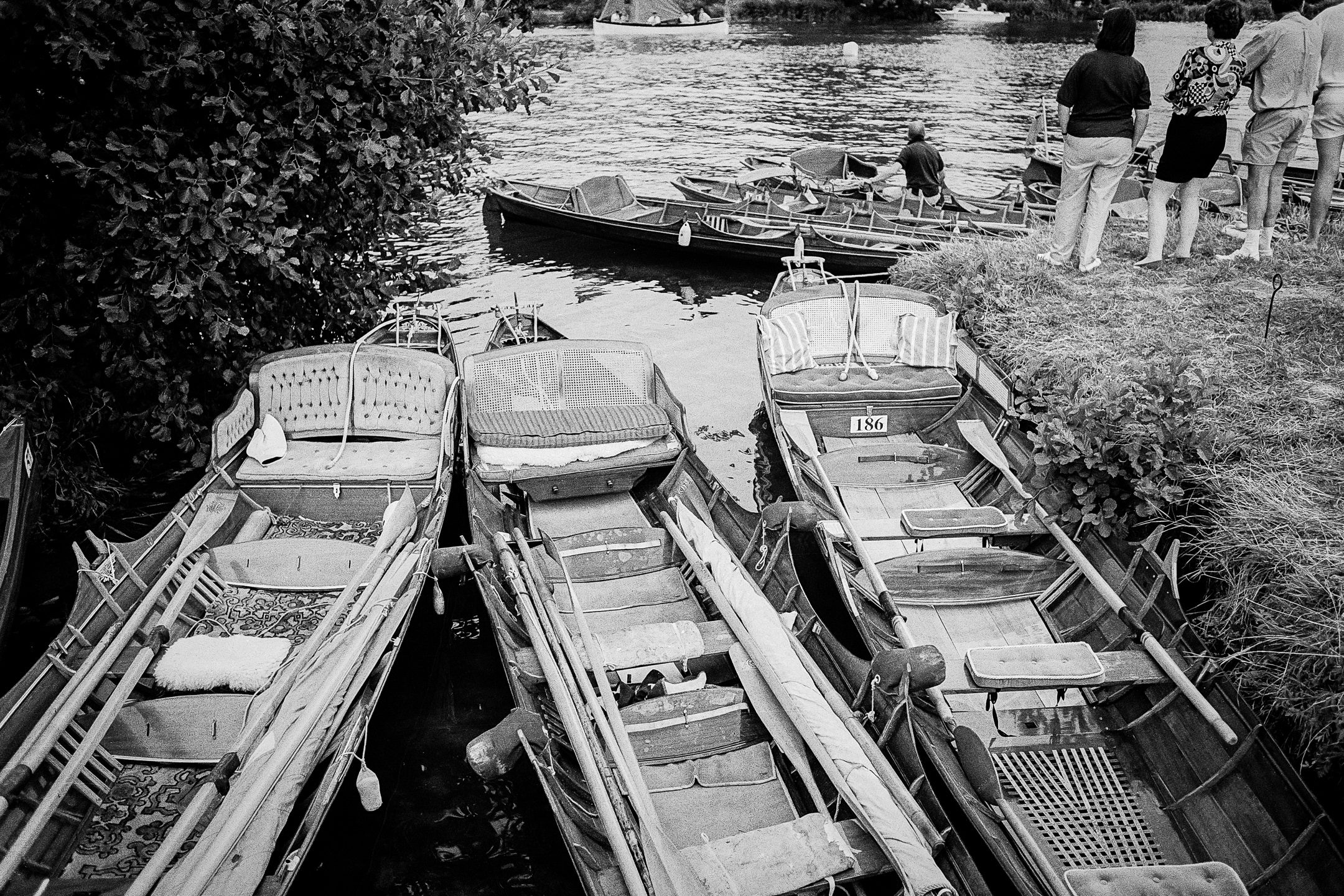 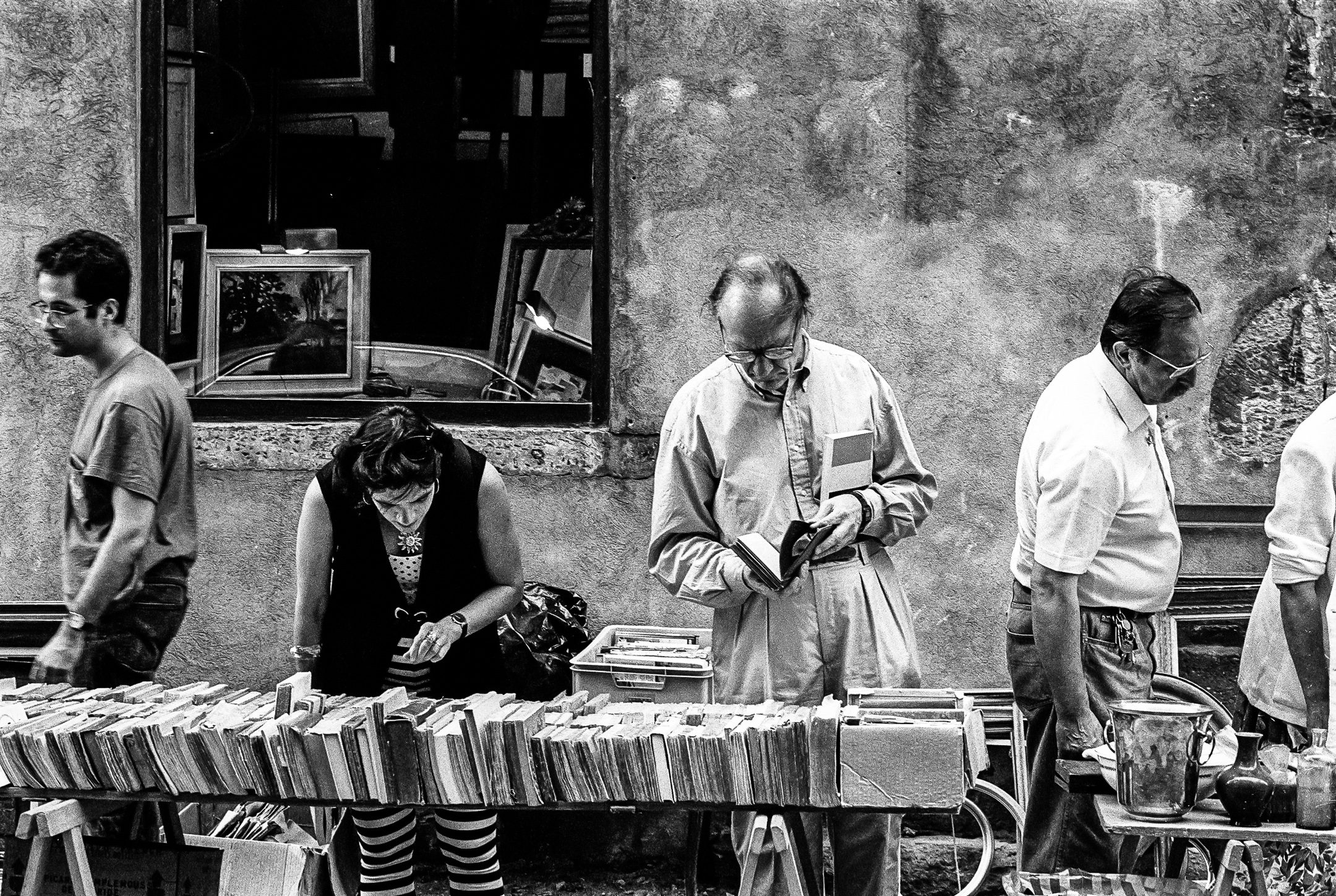 Seeing in black and white

Pre-visualisation is where you look as a scene and know how it will look as a finished image. At the age of about 16 a dear school friend who I shared a darkroom with said “I hate you, you have the ability to see in black and white” and I realised he was absolutely right. I had that ability to pre-visualise any scene as a black and white image and shoot accordingly. I don’t know where it comes from, maybe looking at too many copies of ‘Life’ magazine as a child, but it was there. If I shot an image I knew how it would look as a black and white print, as simple as that!

I have never been happy shooting street on digital, and after not doing it for a few years I realised it was because  I had pre-visualised the image as black and white, but when I viewed it, it was colour.  It just didn’t work!

The only answer for me was to buy a film Leica (in my case an M7) and start shooting black and white film again. But what about the processing etc. which I really didn’t want to get into under any circumstances? The answer was amazing simple – I would start shooting a chromogenic film such as Ilford XP2 Super which is conventional C41 colour process (so it can be processed anywhere in the world in a High Street lab) and yet it yields a monochrome negative which is virtually grain free and easy to scan. Alternative I could shoot a fine grained 400iso film such as Ilford 400 Delta and get it processed by Ilford's own laboratory.

My prayers were answered, and I am back to really enjoying my street photography type of work again. 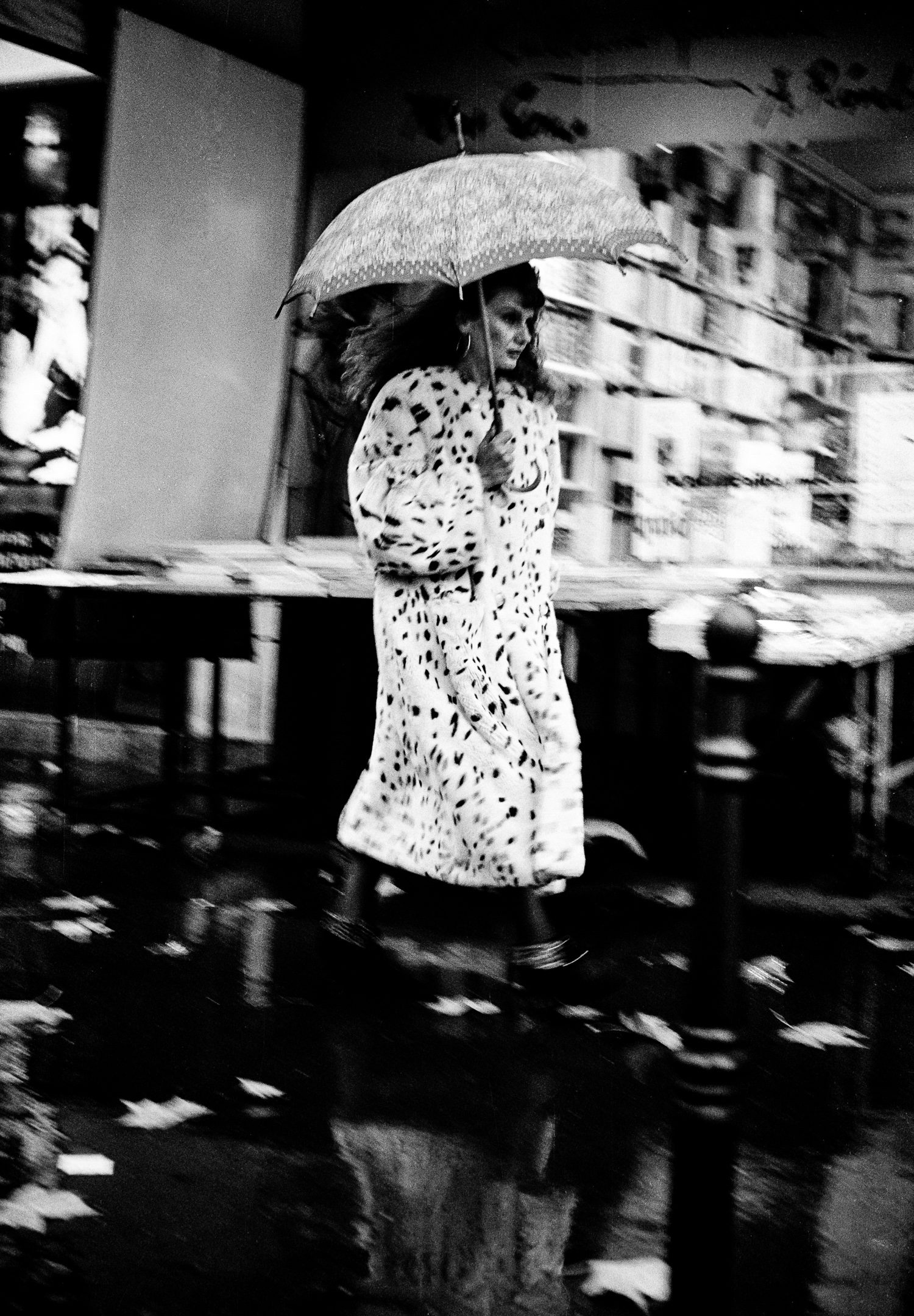 Ruahing thrrough the Rain – A young lady in a fur coat rushes through the rain on a street in central Paris – taken from a passing taxi cab. Delta 400 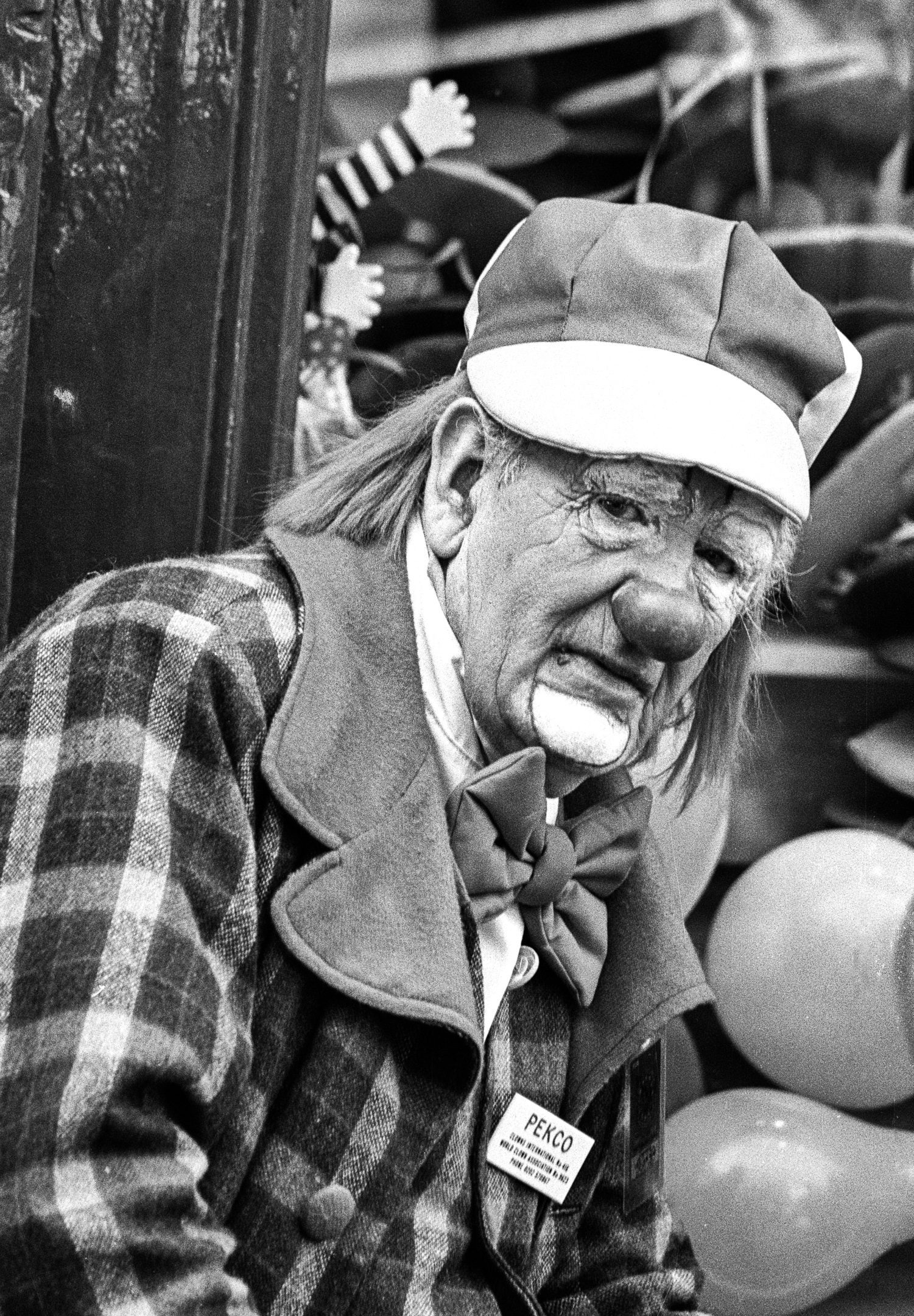 Pekco the clown at a quiet moment during the 1992 Bognor Clown Festival. HP5+

Based in Southampton, England, I am a freelance editorial and documentary photographer with over 50 years experience in photography. My work has been featured in exhibitions and publications worldwide. It has been featured on the web version of National geographic, and I have had a one-man exhibition at the Royal Photographic Society in the U.K. and many other galleries in Europe and the U.S.A.