For some years, I have been visiting Central Asia. The region with its unique culture and people is always interesting to me.

In spring 2018 I went to Kandahar, Afghanistan and from there to Mazar-i-Sharif and continued to Uzbekistan and Tajikistan. During the trip, I got sick and it was not very enjoyable. In autumn 2018 I decided to go again and was excited to do it without sickness. 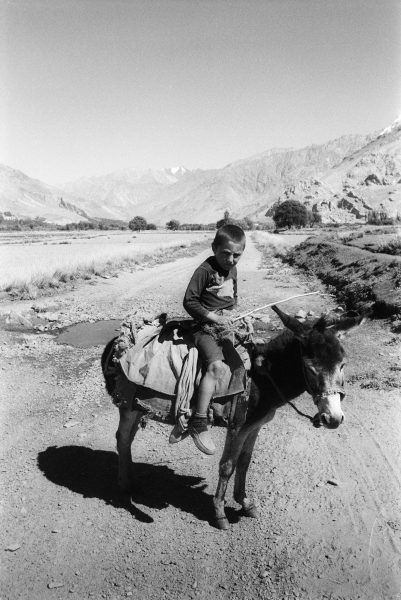 Child During the Work

The plan was to fly to Dushanbe and from there to continue to the Afghan border in Vanj and go for some hiking along the border river to explore the villages along the valley. I wanted to cross again back to Tajikistan in Khorog and continue via Murghab and Sary-Tash to the Chinese border in Irkeshtam and finally visit Kashgar. It was always a big dream to continue such a trip to China and this time I wanted to make my dream come true.

Because all of the last trips were shot on film, I wanted to do it again this time. I picked up my Leica M4 and around 20 rolls of ILFORD Delta 400. 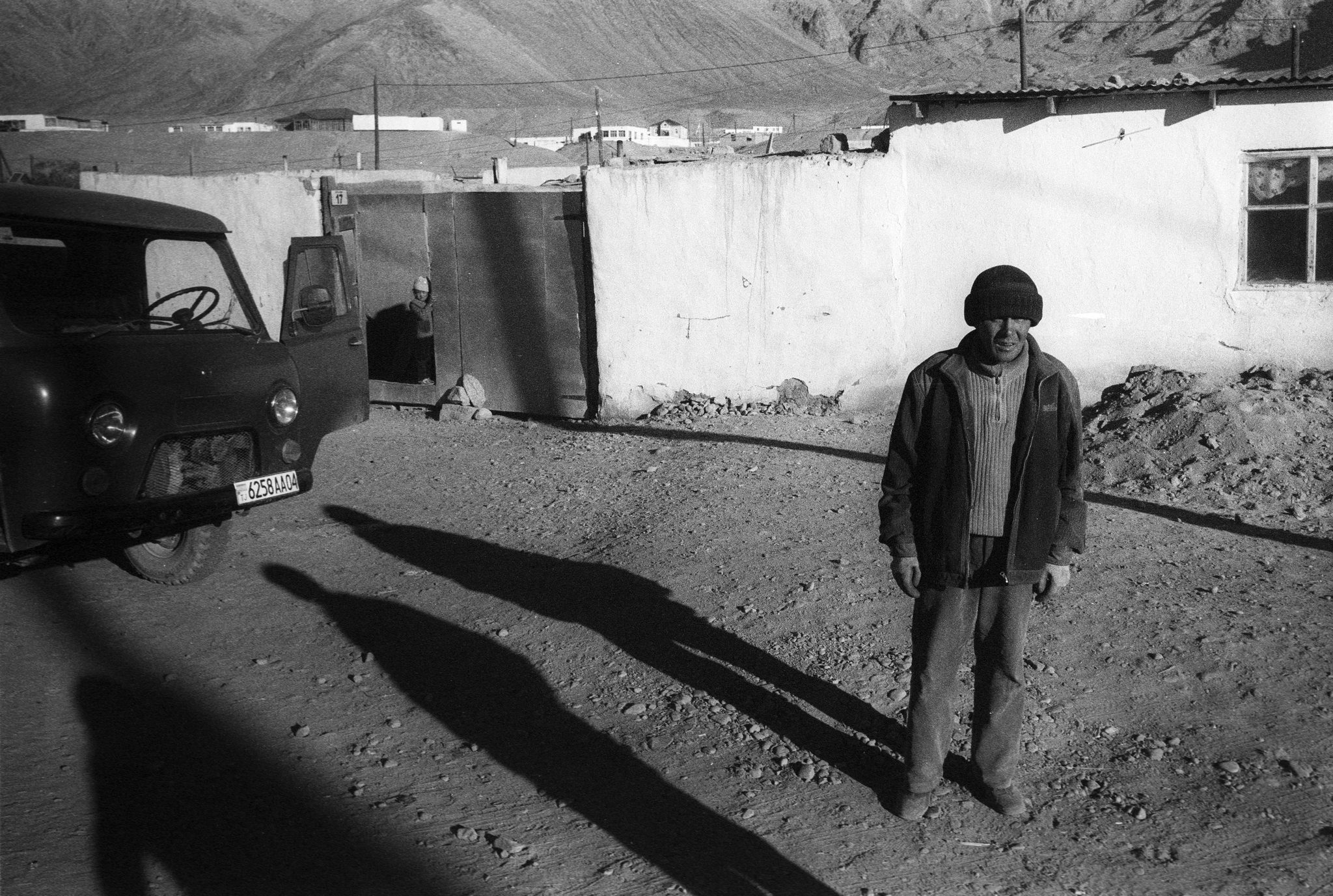 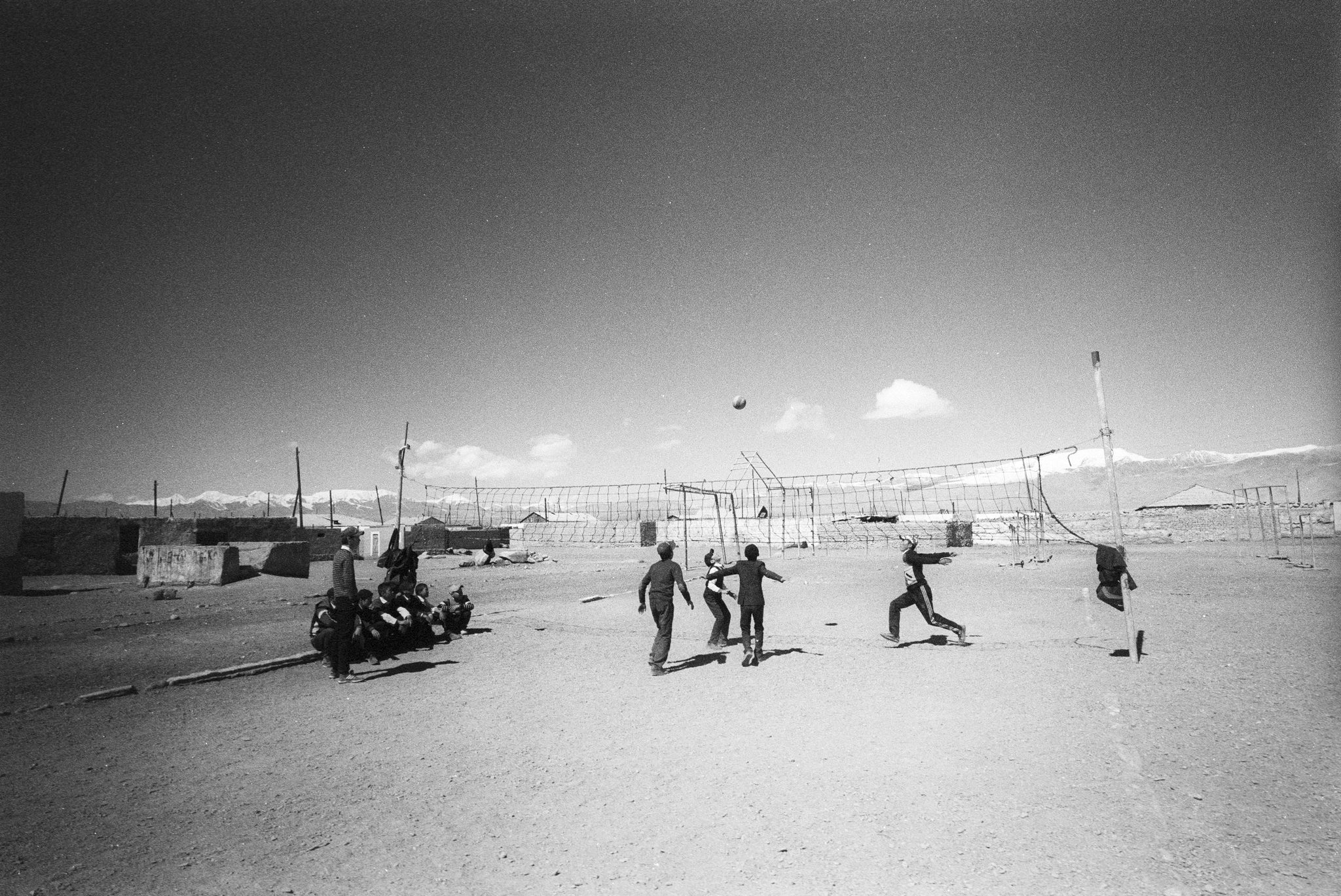 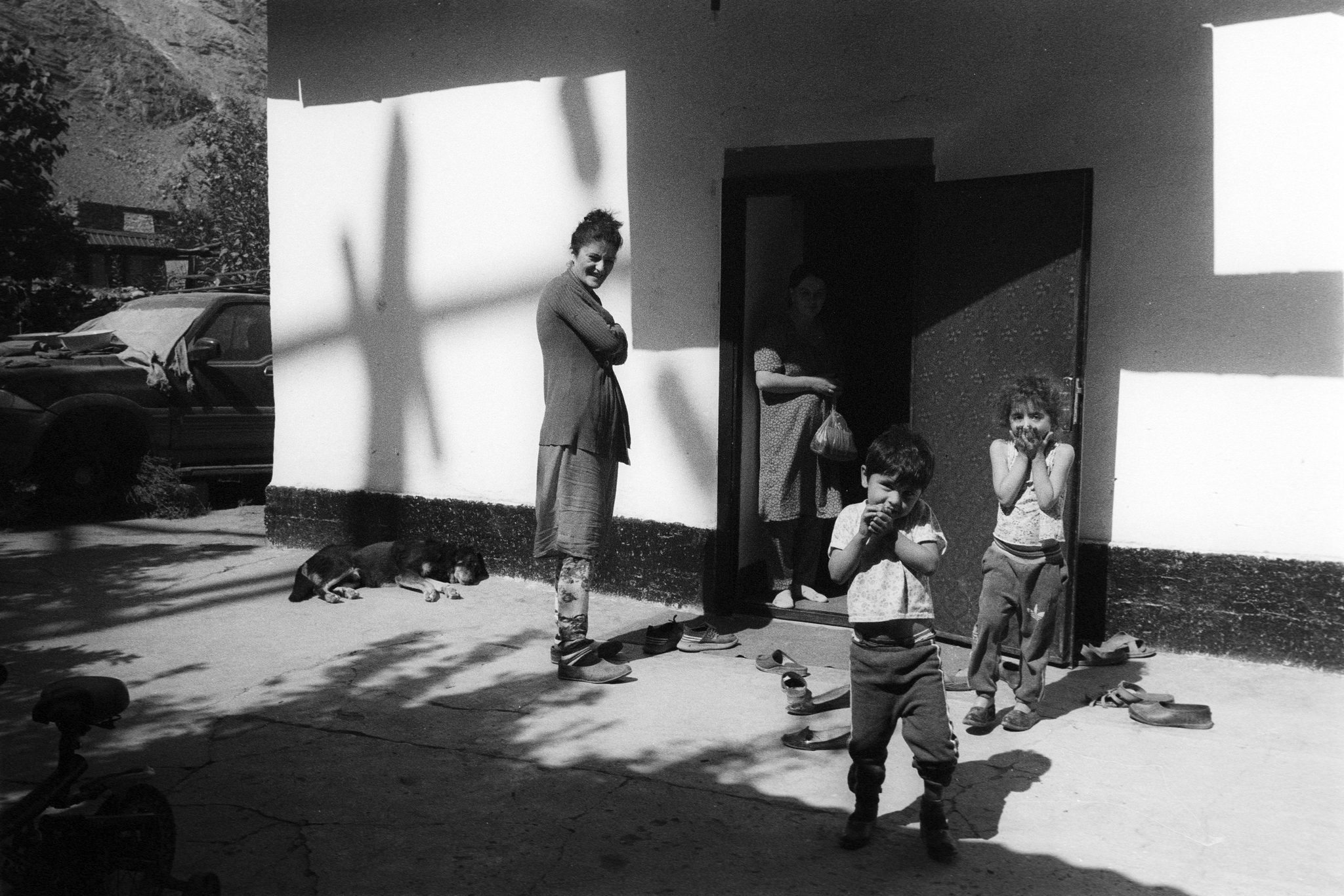 Travelling like this has some advantages in the region. Security forces, especially in Xinjiang/China cannot check your photos. You don't need cables, batteries etc. so that makes travelling very light. Film for me has a timeless quality and therefor I think even in 20 years or more, film might have a place in travelling and documentary photography.

Due to some security issues, I had to modify the original schedule a bit. I could not cross in Vanj to Afghanistan, but in Ishkashim I had to make almost the same route I did some years ago. 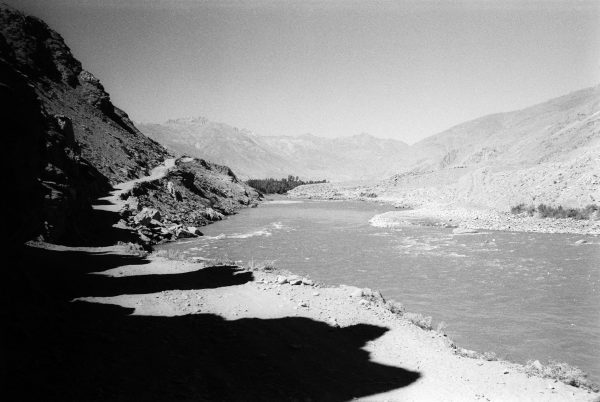 This time, in autumn, I could see the farmers working on the fields and it was quite impressive that they do it with tools that are very old. There were no agricultural machines at all. After a couple of days trekking around the valleys along the river, I lost my light meter and burned my skin a lot. But the conditions where perfect, so it was not too hard to guess the right exposure. 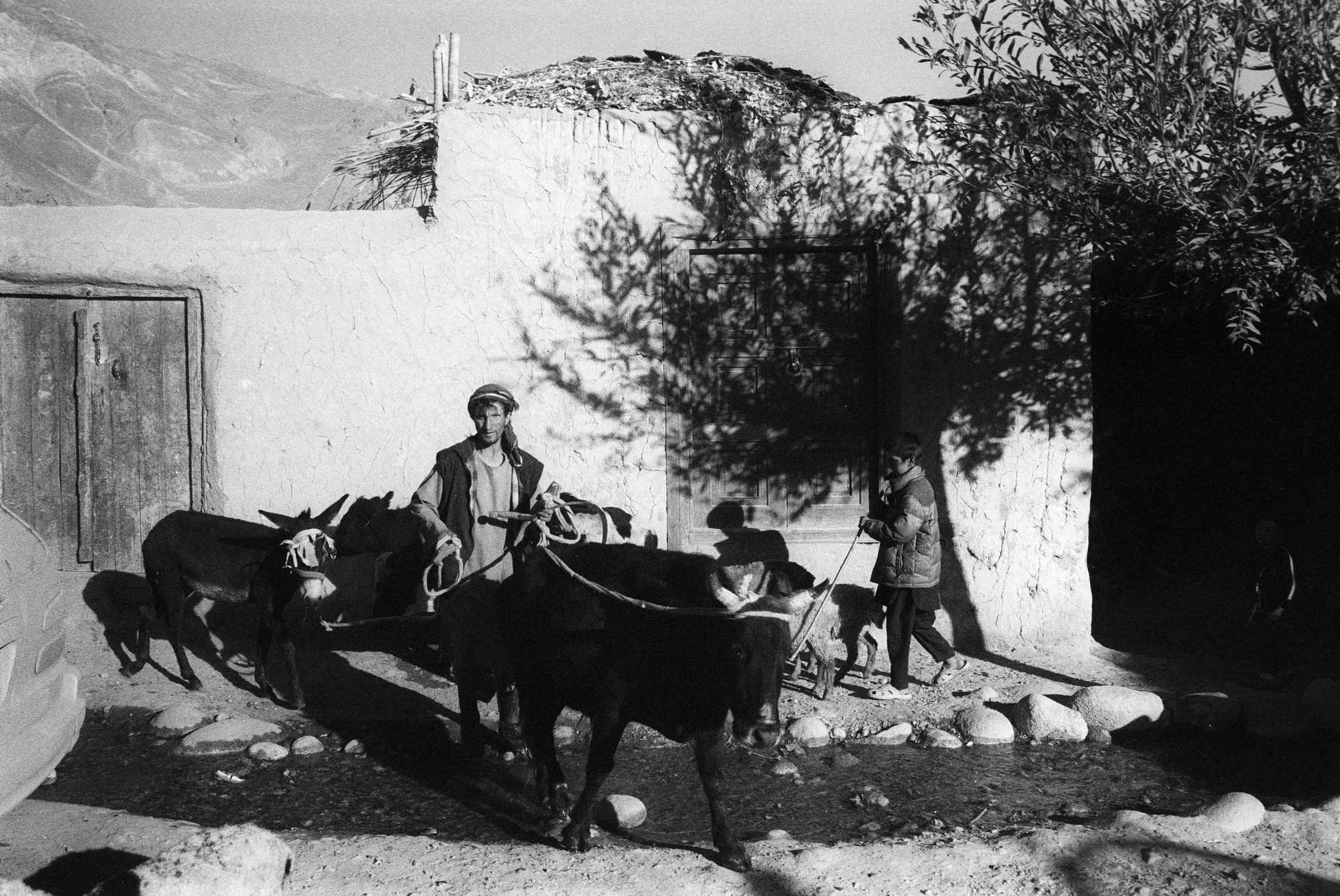 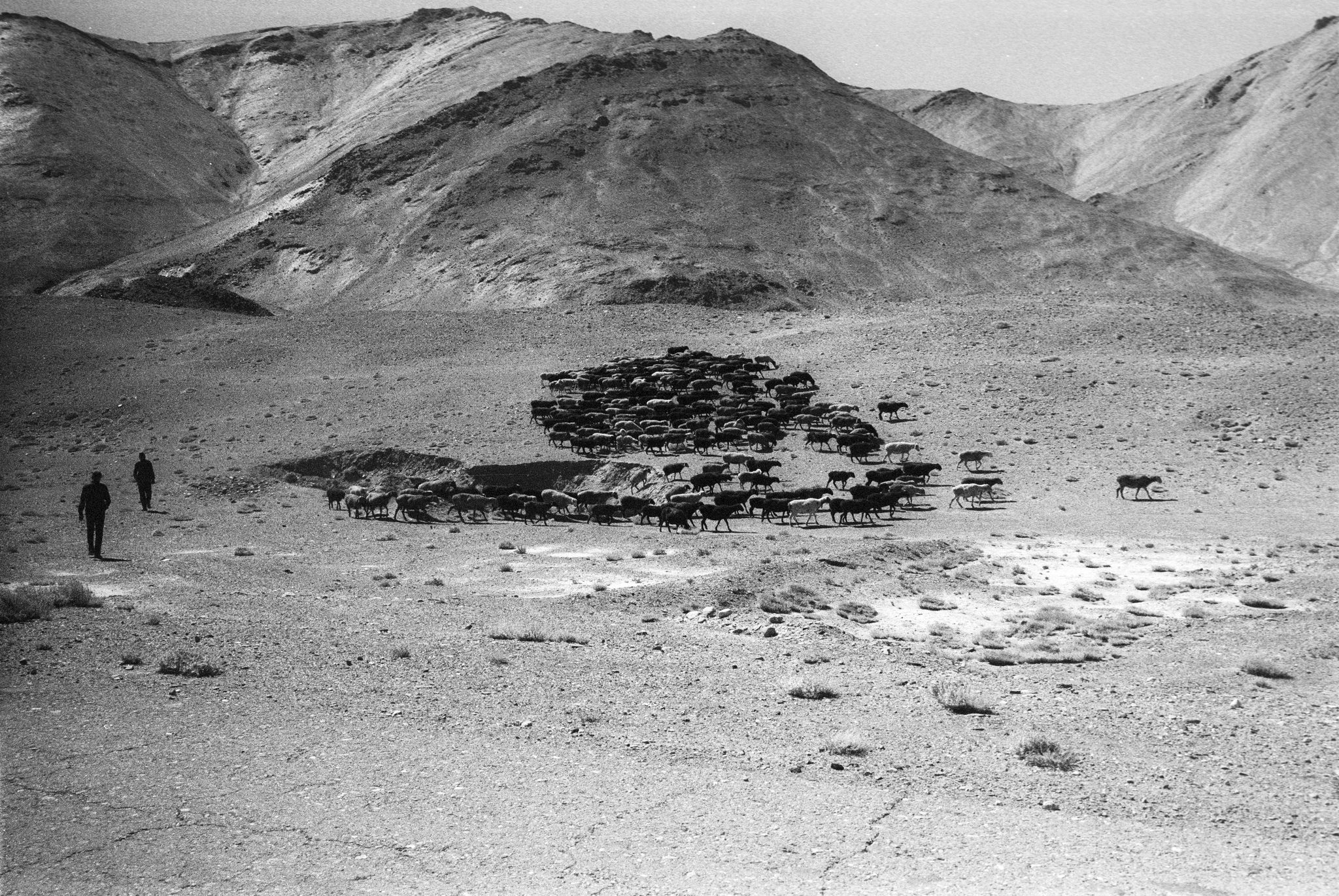 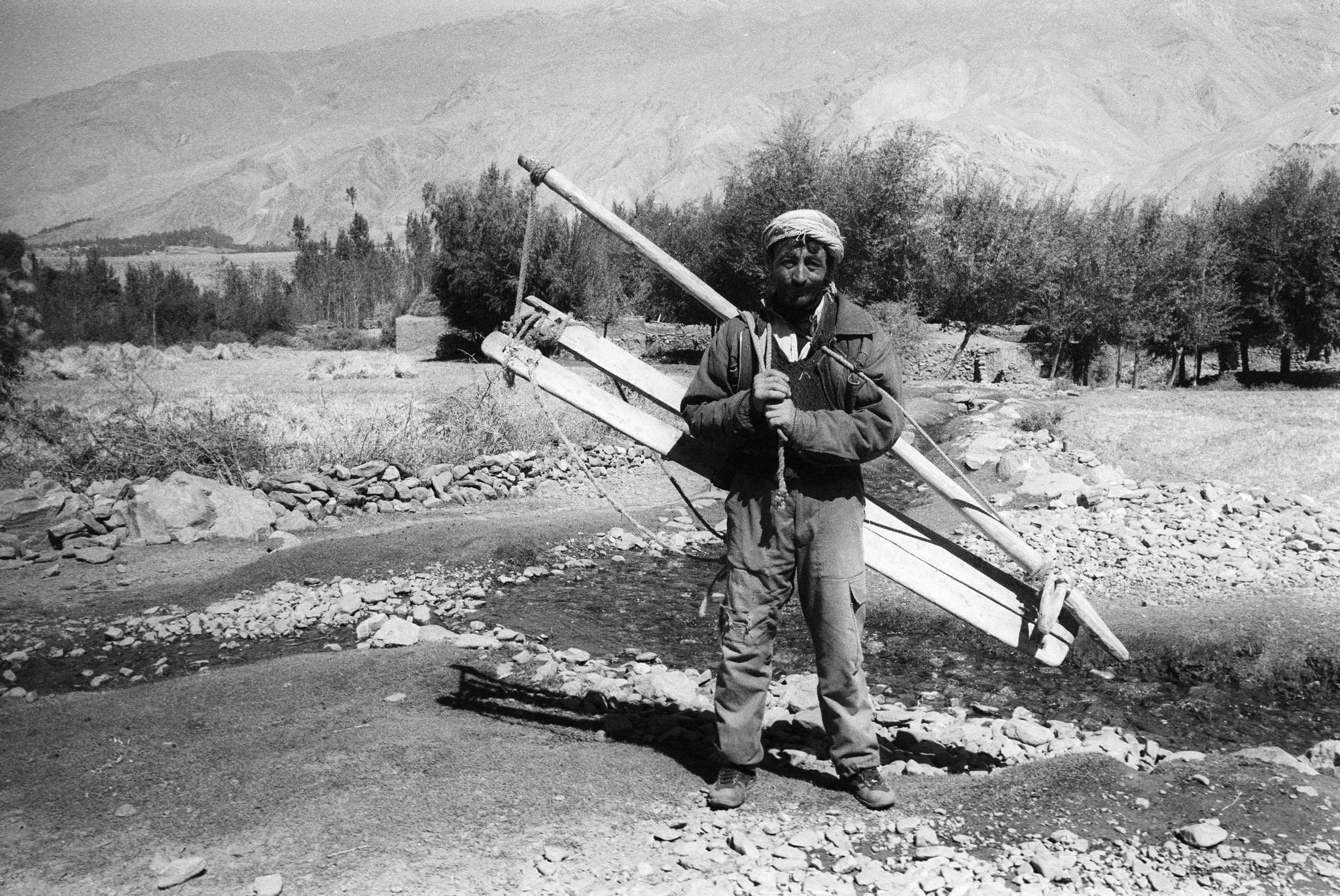 Worker on the Field

Back on the border to Tajikistan, the border police told me that the border is closed. "Baste ast" as it is in Persian. I asked them why it was closed, they told me it is because of some holiday. They also asked me, if I had time and if I could just cross in a couple of days. I'd learnt some Persian in the past years, and I could respond. I told them that I needed to cross now and that I don't have time to waste. I just left my stuff in the dust and waited a couple of minutes.

After some time, they just let me go and opened the border. That’s the funny thing around these states. It is not like in Europe or lets say - in the "west", where we all have some strict rules and computers and stuff. Its a bit different but thats also the interesting thing on the travel - you never know, what will happen.

Back in Tajikistan and still healthy (except the burned face) I continued to Kyrgyz Republic, to Sary Tash. At this crossroad I wanted to take the path to China some years ago and this time, I will do it, I thought. 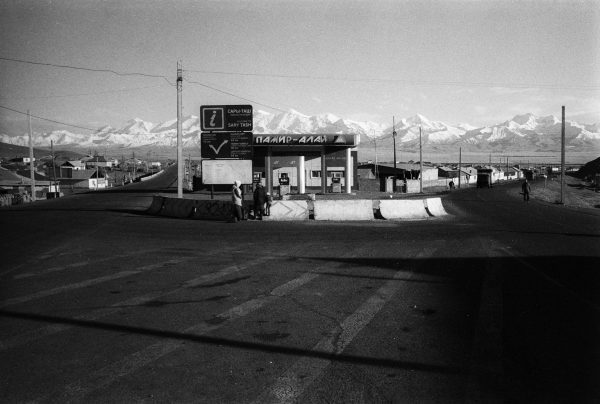 Crossroad to China in Sary Tash

On the Chinese border, I felt really excited. This border was a lot different than all these borders before. Much more cameras and stuff, all the facilities looked like new.

At first, all people who wanted to cross must give the cell phones for checking. I showed them my Nokia and the women of the border police just looked at me if I was an Alien or freak and returned the Nokia to me instantly. They also wanted to check the Leica M4 but I could explain, that it is not the best idea to open it and they accepted it.

After one hour it was okay, I could go to the next border facility. This was around 150km away and everyone needed to pay for a taxi. This check also went fine and in the end, I had my stamp and entered Chinese territory.

In Ulugqat I went on a taxi with an uzbek women and two Han Chinese men. She said, "your passport - big problem" (I have a German Passport). For every person, which is not Han Chinese, this region, Xinjiang is very special. You get checked all the time by police. Just few kilometres to Kashgar, we had to get off the taxi and go to a police facility where they take photos of the passport and check your identity. 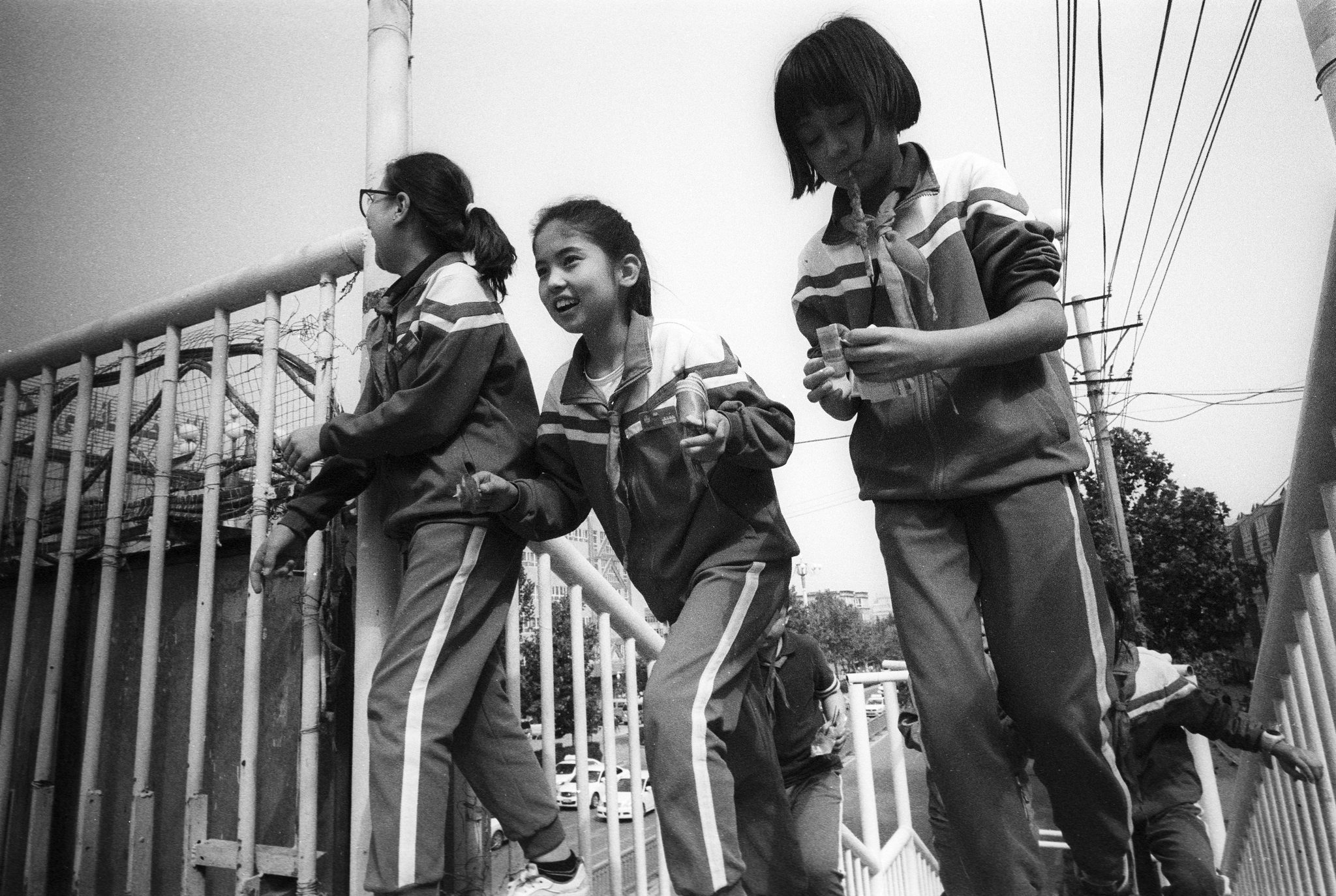 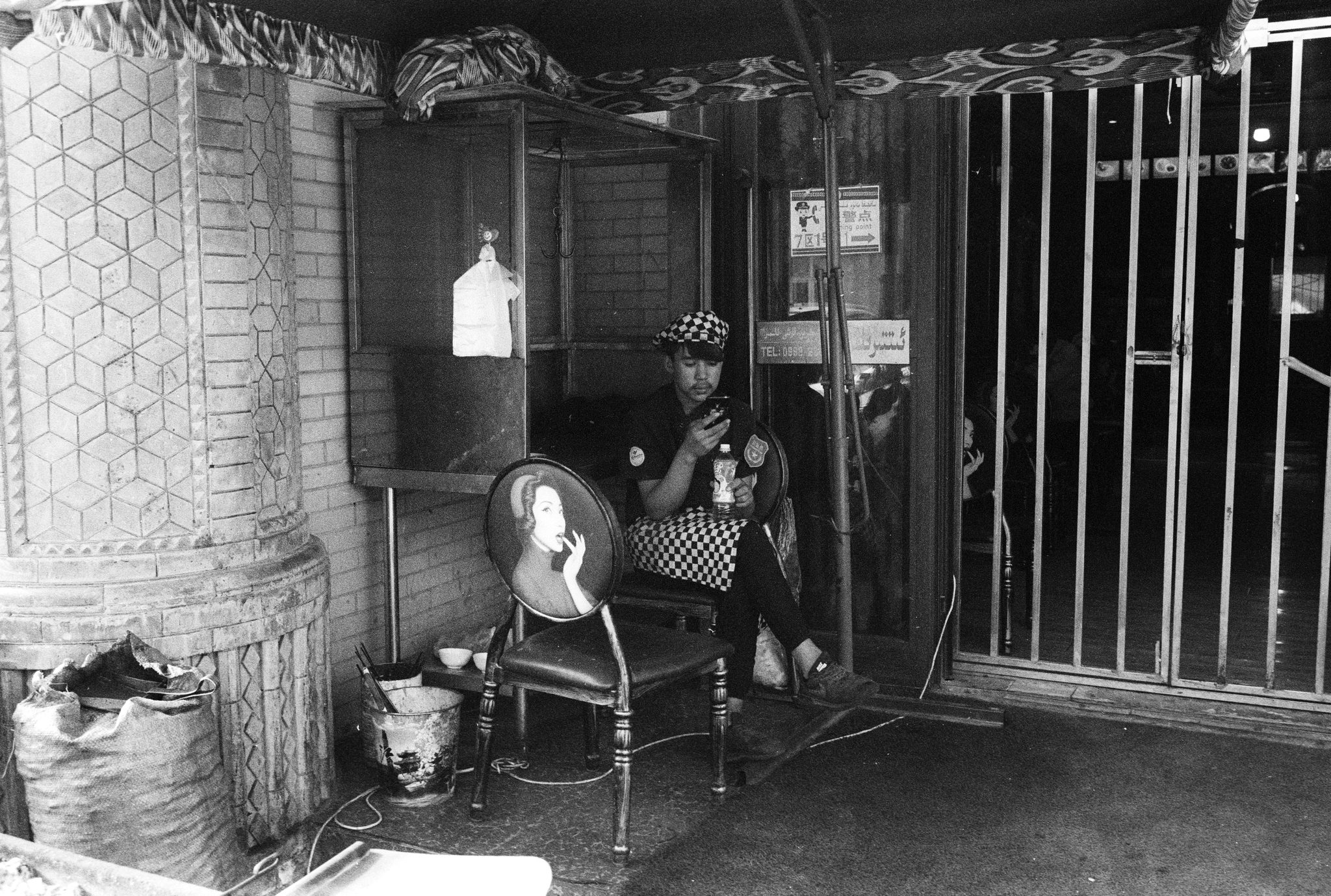 Also, around 13million of the Uighur population is under special security investigation.  You can see this very clearly on the streets. I tried my best to take some street shots and also cover just a little bit of this life. During the days, some jet planes from the Chinese Air Force flew through the sky, which seemed strange to me. 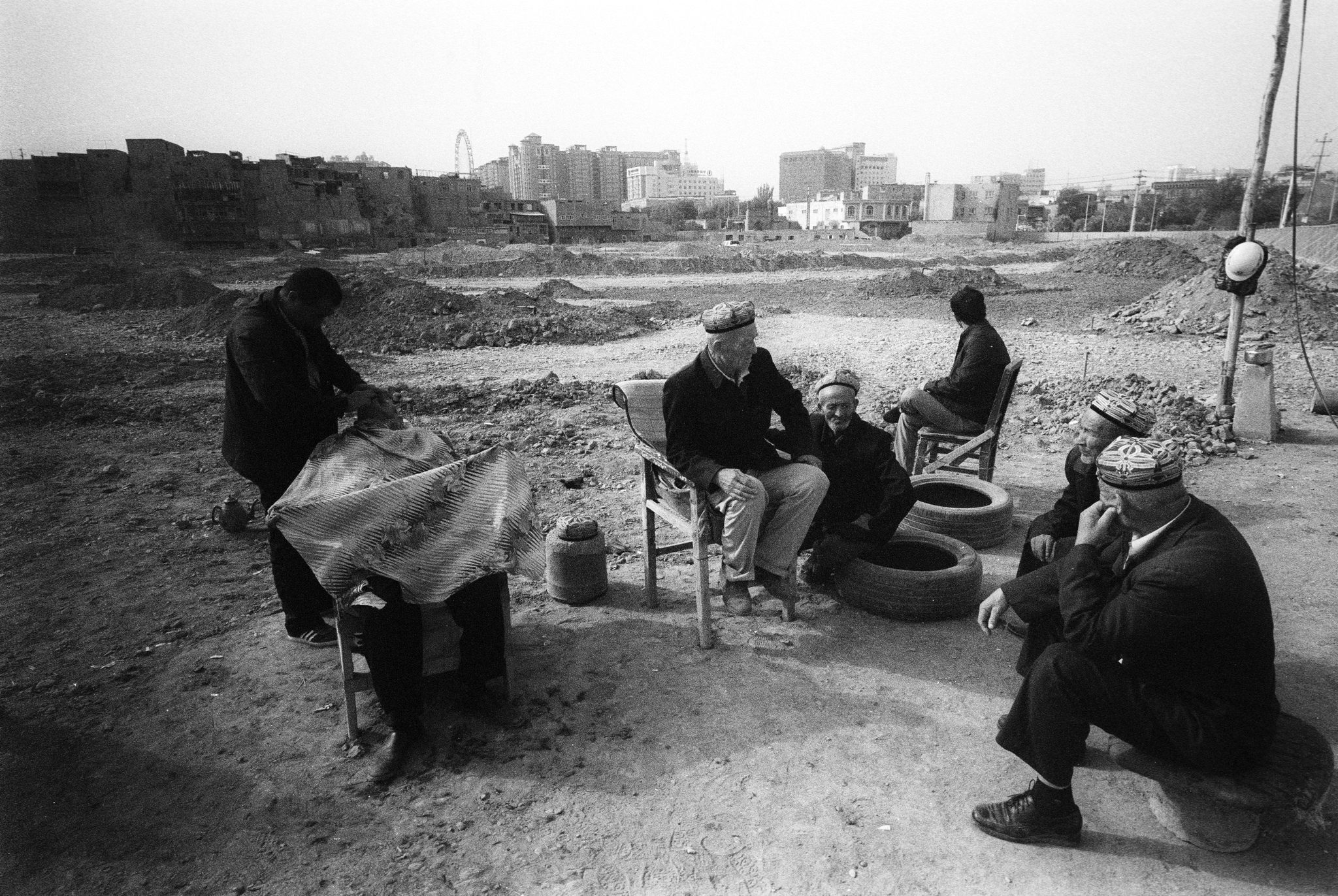 Uigurs Shaving in Front of the Rest of Original Old Town 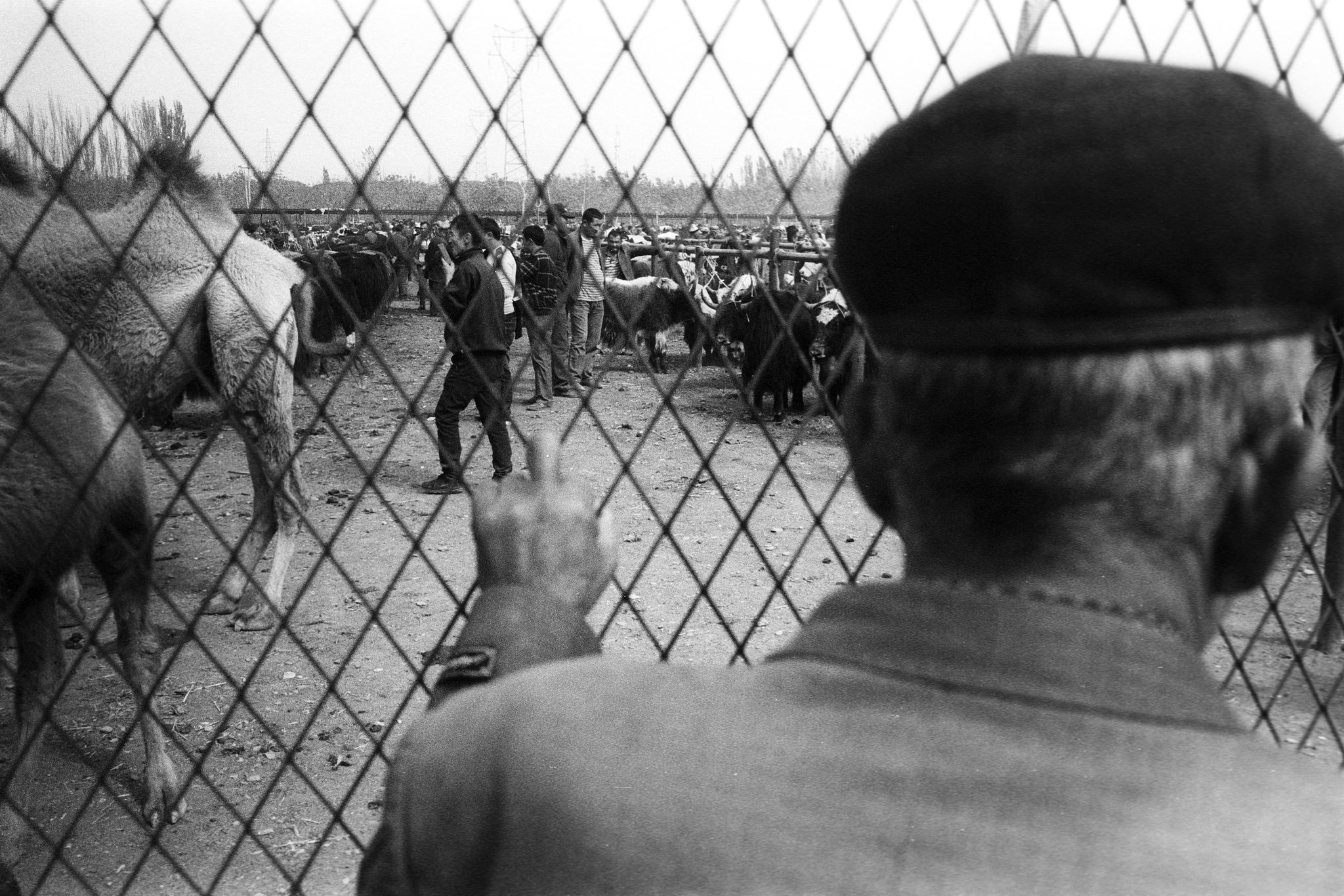 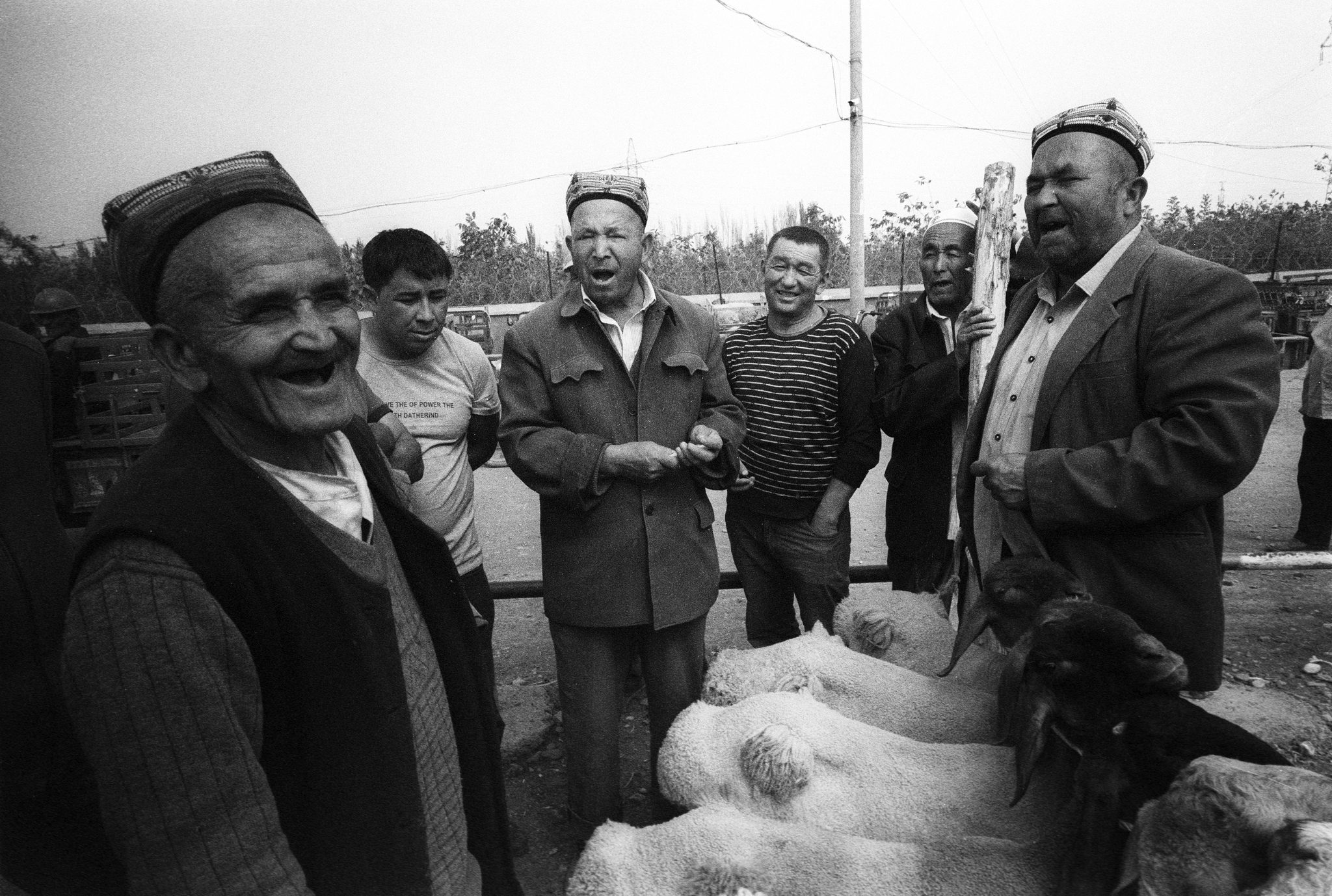 After a week in Kashgar, I continued to Urumqi and from there I flew back home to get the film developed. Since about 2 or 3 years, I use ILFORD DD-X for all the Deltas I shoot. The results were perfect.

For 2019 I am already planning another trip there and am excited what will come out this year.

Wieland is a street photographer from Leipzig who likes to shoot moments in daily life of people in countries he´s travelling to.

In recent years he travelled mostly to middle east and central countries like Tajikistan, Afghanistan and Iran.