There was a lot of interest in this shot when it was shared, so we asked Andrew Orr to tell us a bit more about it. 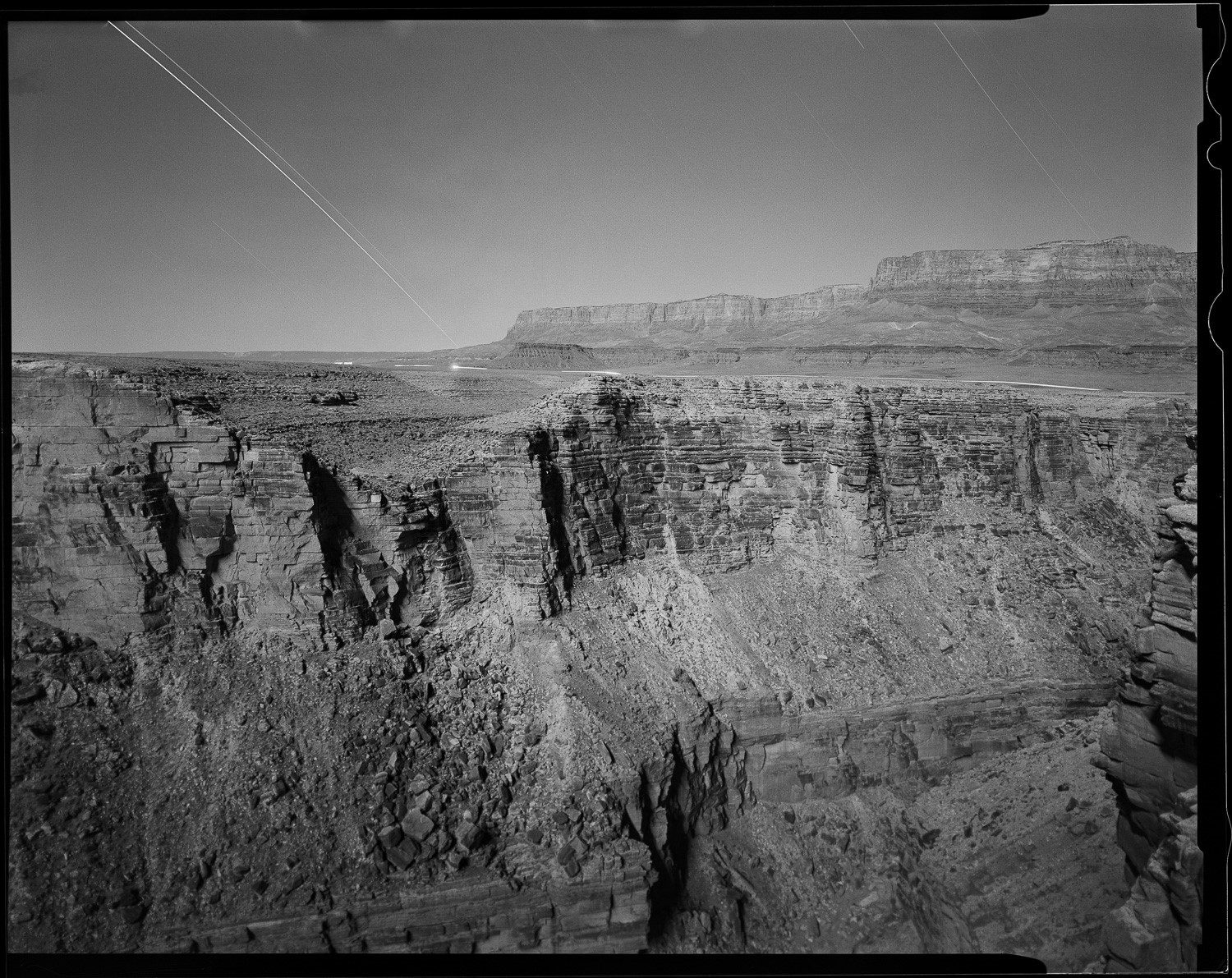 I was inspired to take this photo after having multiple failed attempts at long exposure photography with large format cameras. With the size and bellows extension on a 4x5 camera, it’s exceedingly difficult to keep a camera from moving in even the lightest of wind for a two hour exposure. Fortunately, everything came together on this attempt and I was able to get Jupiter and Saturn setting a few weeks before their closest conjunction. I had one chance at this photo and it was a huge relief when I pulled it out of the developing tank and knew it had turned out properly exposed.

I’ve tried long exposures with 4x5 cameras before, but I’ve always had issues of camera shake/blur, being out of focus, or incorrectly calculating the exposure. For this photograph, I admittedly just guessed on the exposure time and aperture to use. In the past I had tried several (failed) attempts on Ilford FP4+ film with a wide open aperture (f/5.6 or wide open on whichever lens I was using) and having them turn out underexposed. I figured with HP5+ being two stops faster and a full moon that evening I would have to stop down to about an f/8. When I developed the negative I realized I probably should have set the aperture to somewhere between 5.6 and 8 since it was a little thin.

What process did you use

Before the sunset, I had already planned to take a long exposure photograph as the full moon rose into the beautiful Arizona desert. Shortly before the last of the sunlight, I set the tripod up and set up the composition I wanted. I could already see Jupiter and Saturn and knew approximately where they would set two hours later.

I focused the camera, made sure everything was ready to simply stick the film holder in, pull the dark slide, and start the exposure once it became dark enough.

Fumbling around in the dark before a photo is always an issue so I wanted things to be as straight forward as possible having only one chance at this. On Copal shutters there is a B and T mode for Bulb and Time respectively. For the time mode you simply click it once to start the exposure and a second time to finish. No need to hold the shutter release down as in the bulb mode.

I hand-processed it in Ilford Ilfosol 3 and used Ilford Rapid Fixer for the fixing stage of development. The film was loaded into a Stearman Press SP-445 tank for developing. The negative was then digitized on a Tango drum scanner.

I have not tried doing a silver gelatin print yet, but ideally I will try that soon. For this image, I elected to have a drum scan of it to bring out as much tone and detail as possible from the negative. Typically, I use a flatbed scanner and the difference between a proper drum scan and flatbed scan is incredible.

I have been interested in photography as a hobby for the past 14 years. I first learned on my parents’ Nikon FM shooting 35mm film while studying geology in college. After graduating I bought my first DSLR and shot digitally for many years. Since then I’ve moved back towards film and now shoot medium format on a Hasselblad 500C and large format 4×5 with a Wista 45DX. When possible, I combine photography with my other hobbies: technical diving, traveling, hiking, caving, and canyoning.

We asked you to share how you used our products differently and you shared an amazing range of #alternateproce...
Read More