The last days of Summer

As the last days of summer drew to a close I worried about the stock of low ISO films I'd accumulated. As much as I’ve enjoyed my film only ventures over the last year I do worry about the availability of light in London where I do the vast majority of my shooting. Due to limited storage space I can only commit to shooting so many rolls at once, and with the long, bright days diminishing I needed to make sure I had room for as many 400 speed films for pushing (HP5+ & Delta 400), as well as high speed for late nights and rain storms (Delta 3200).

I decided to make an effort to shoot as much as possible in between the autumn showers. And to finish as many of my low ISO films as possible. Within a few weeks I managed to shoot through one roll of three different types of low speed emulsion; FP4+, PanF 50, and Delta 100.

One of the reasons I worry about committing to a film is because I shoot quite slowly. One roll can remain in my camera for quite a while even with sustained efforts to shoot it. This meant that although I had tried to allocate sunny days I ended up shooting these in a range of conditions, which meant occasionally compromising with my exposures.

A Navy Parade on FP4 Plus

On September 8th I loaded a roll of FP4+ while photographing a Navy Parade on Whitehall. I was really glad with the rendering of the classic emulsion; it really was the perfect fit for shooting the uniforms. I spent my time looking for things that stood out a little bit from the lines, the broken patterns and asymmetry that would make my images a little more interesting. 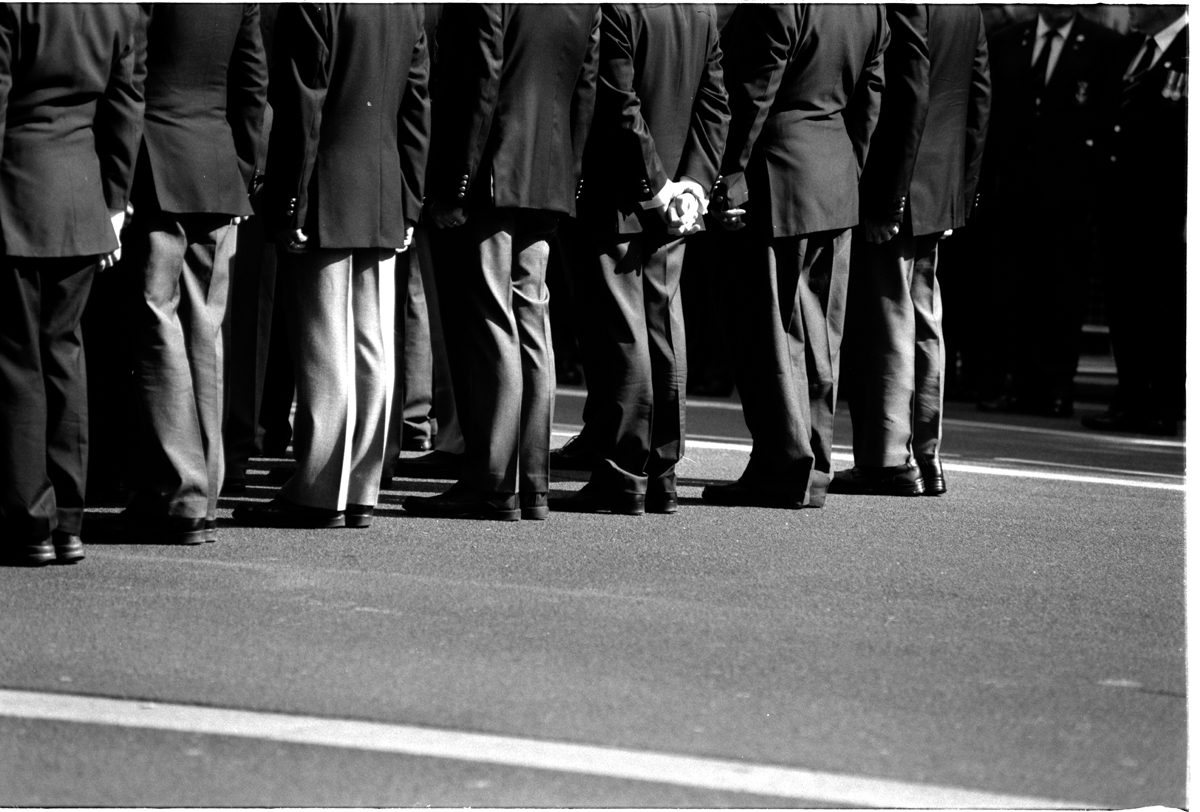 I didn’t just want to shoot the soldiers marching, but to create something out of that situation, or find the odd/surreal aspects that might emerge from the day. 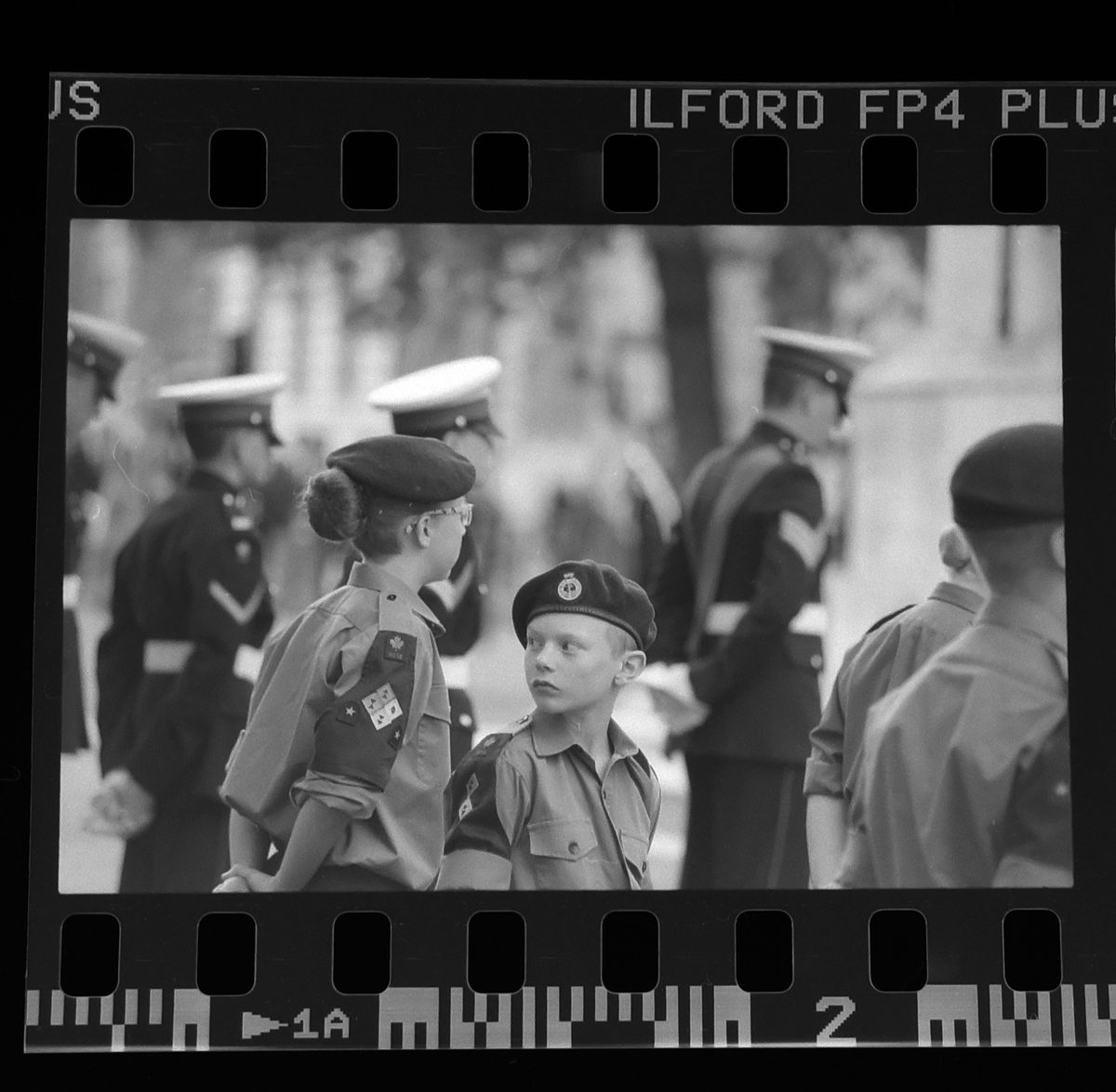 I’ve only ever shot one roll of FP4+ in the past, under some very tricky lighting conditions by the Dead Sea, so shooting it on my “home turf” was interesting, and I think the overall aesthetic fit the London scenes very nicely. 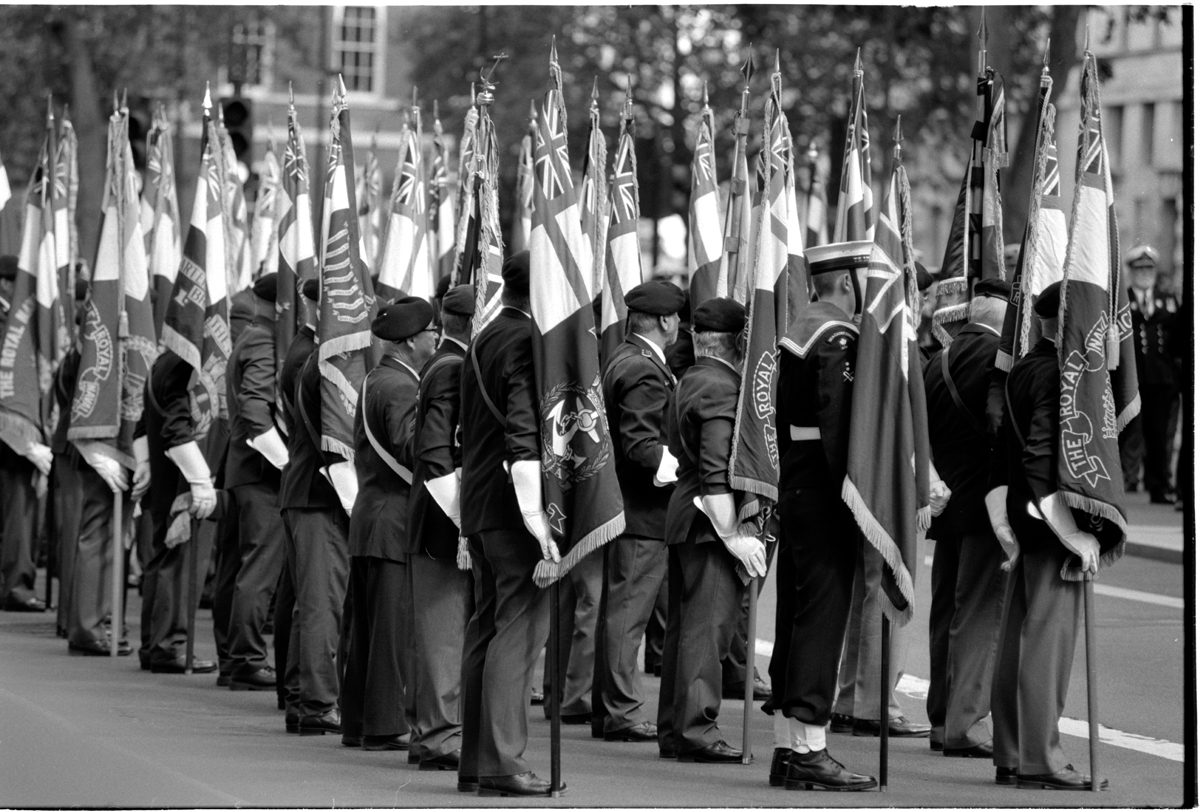 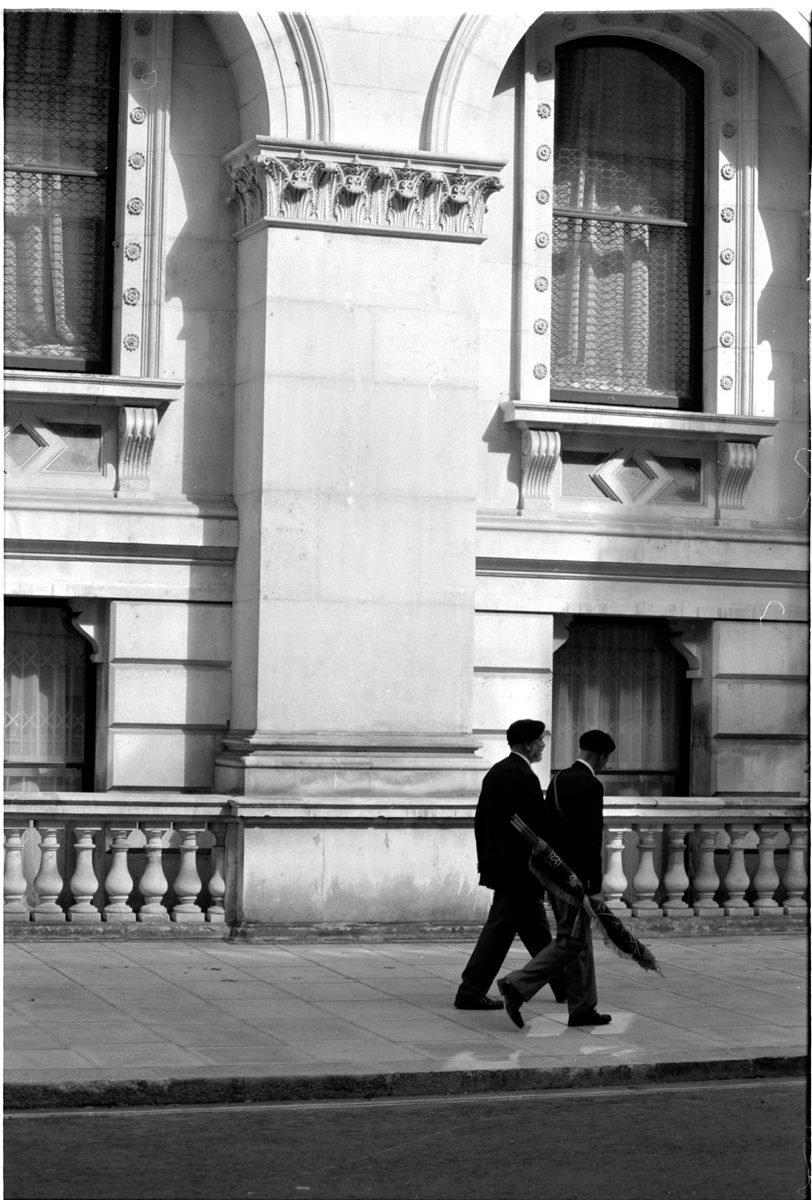 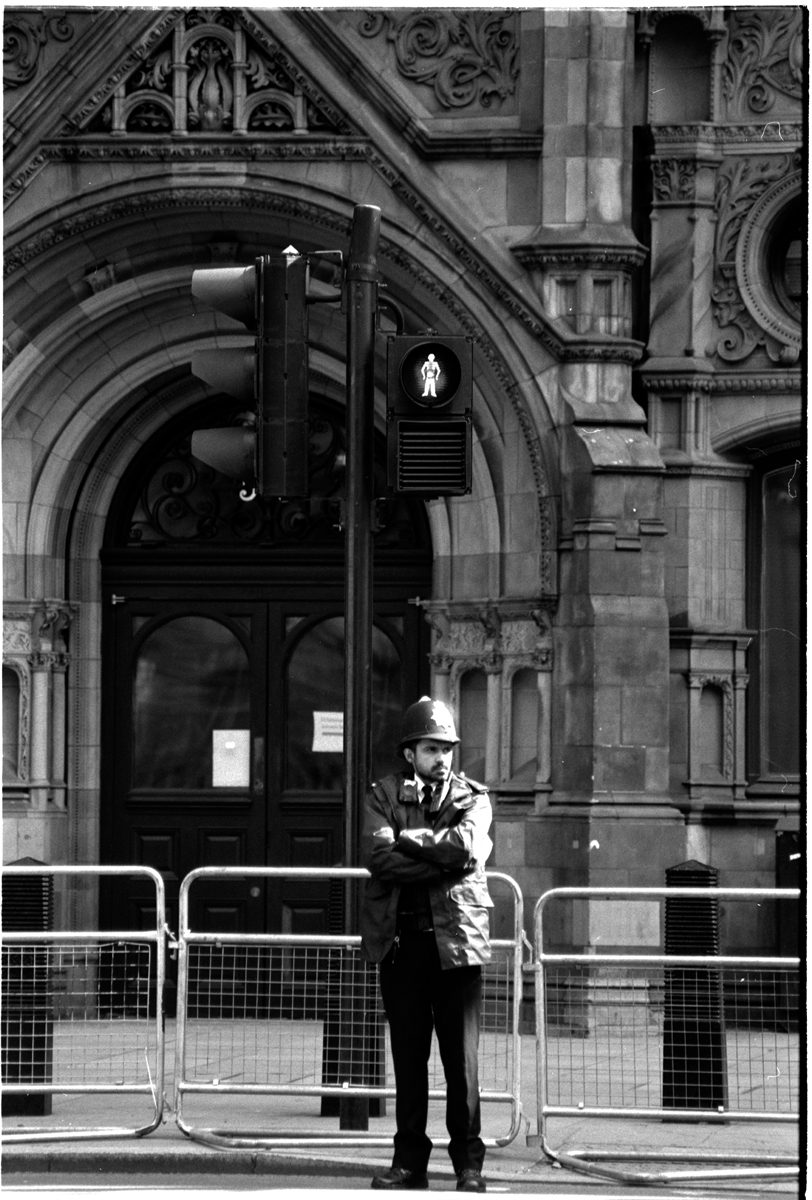 A couple of days after this, on the 10th, I spent the day in Richmond, where I’d intended to get some practice in with my 35mm lens. 35mm is a focal length I have an odd history with, and it’s reached the point where I really need to force myself to use it. 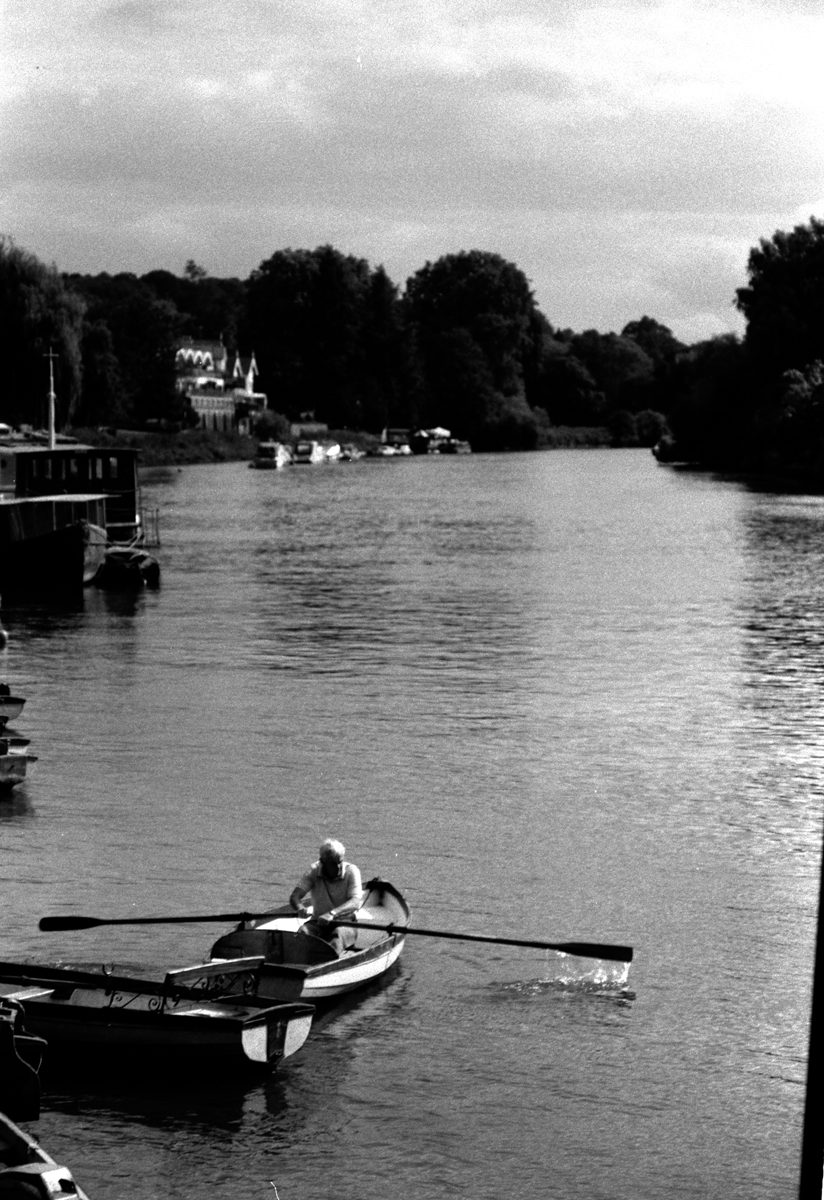 For this I loaded and shot an entire roll of Delta 100 – and as the day went on I ended up reaching the absolute edge of what I thought would be acceptable exposures. The light was much greyer than I’d been expecting, which meant shutter speeds of around 1/15ths even wide open at f/2. 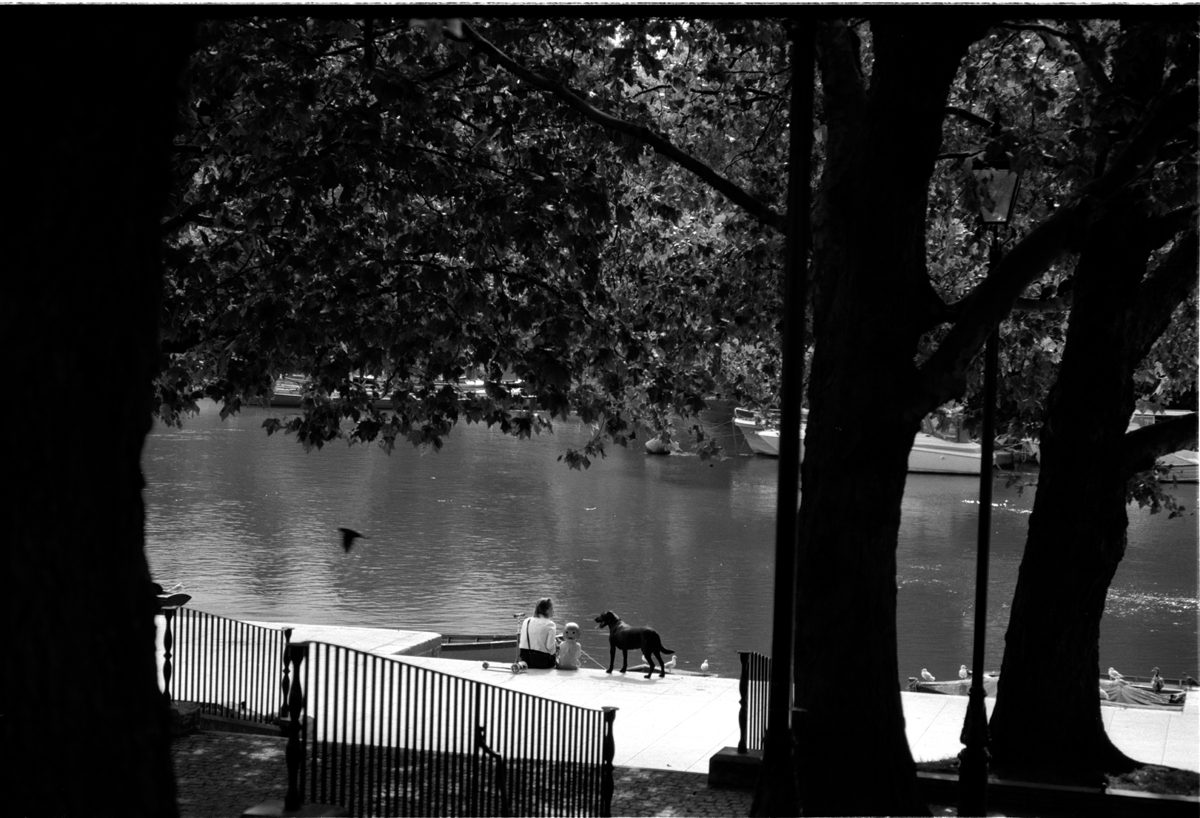 Overcast light is usually one of my favourite shooting conditions. It means no distractions in terms of strong directional light, or worrying about metering. My entire attention is on my subject, the context, and the action. Usually however, I’ll have a 400-speed film, or push, which means I’ll be able to deal with a lack of light better.

That being said the Delta performed really nicely, even when I was underexposing by a couple of stops for the sake of achieving the look I was after. I know that Delta 400 is stellar even when underexposed by three stops in my experience, so the results from the 100 were a nice surprise, but I was never that worried.

Delta 100 actually became my favourite low speed film within a few rolls of adopting it during the summer, and I’ve probably produced the bulk of my best work on the Delta range. 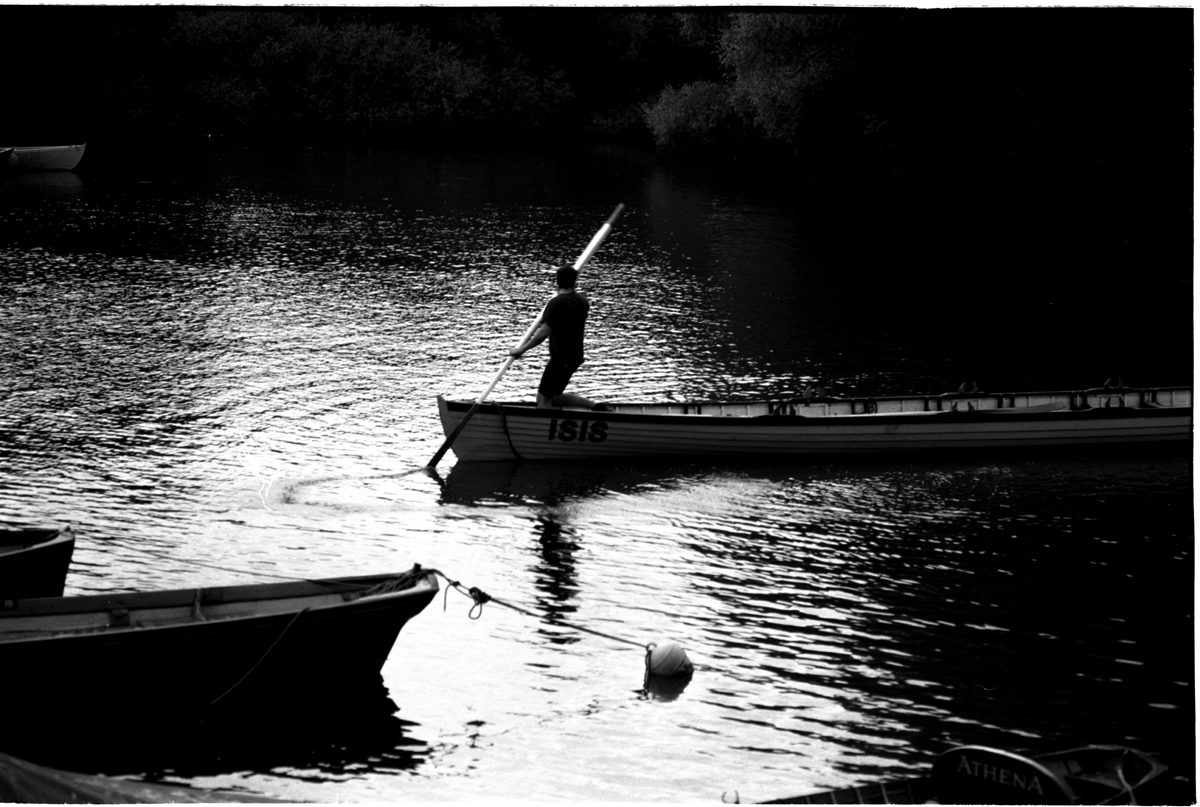 The darker, high contrast aesthetic really lends these frames a mood I’m happy with. It's especially pleasing when shooting the figures against the water. The layers of pure black shadow and reflected white of the sky really come together perfectly.

PANF PLUS in the sunshine

September 21st was especially sunny, and I took this opportunity to shoot some Pan F 50. Of these films the Pan F is the one I have the least experience with.  This was actually my first roll ever!

I spent most of the frames from this roll at a Parkour event by the BFI. This gave me some great energetic moments. 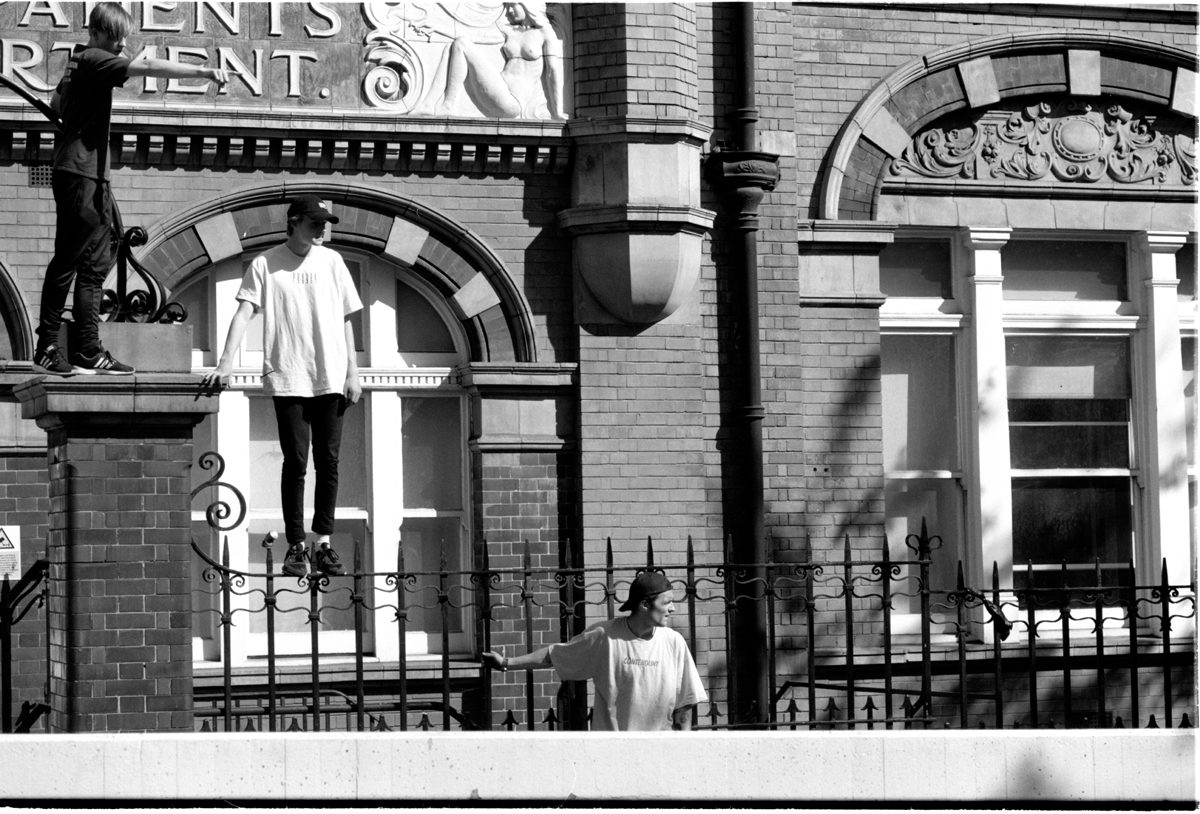 The low ISO lent itself particularly well to some panning shots. I stopped down to f/8(ish) to achieve a shutter speed of 1/8ths. 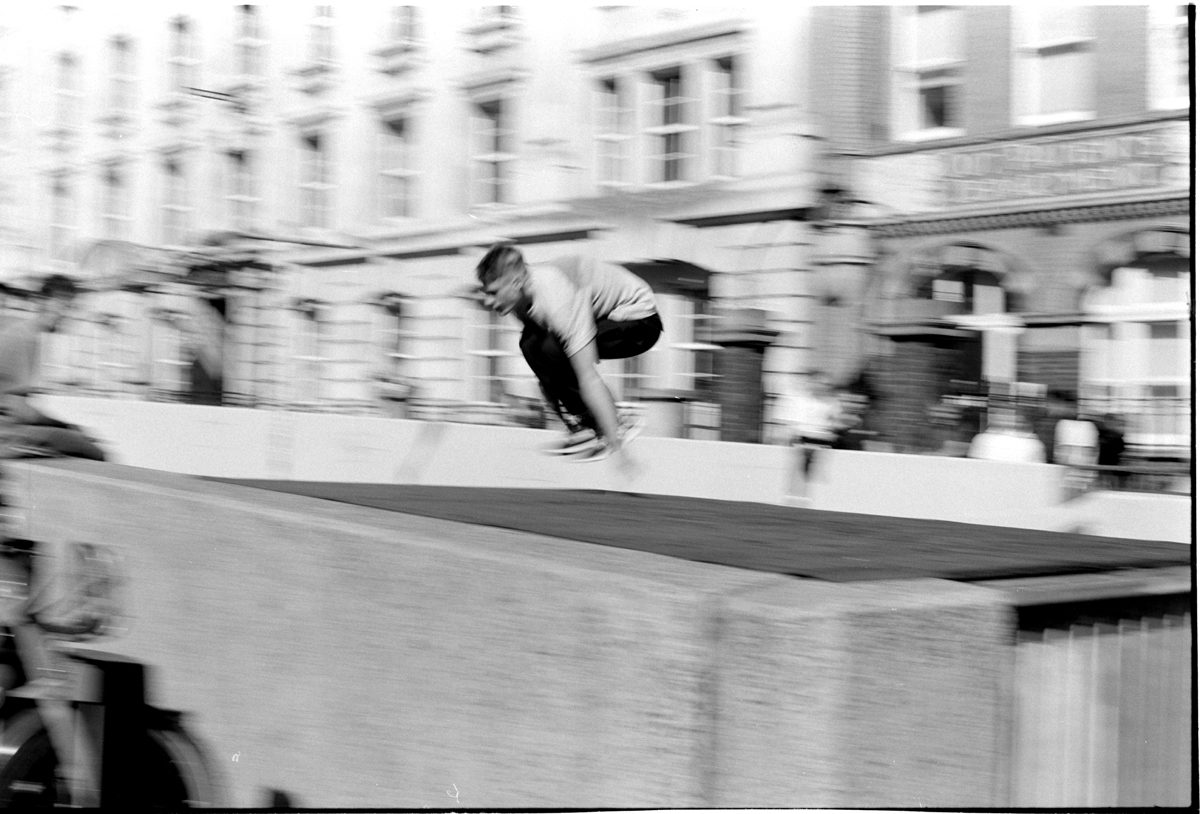 Panning is one of my favourite techniques, but it’s usually reserved for low light shooting situations. Employing it in bright sunlight felt great. This will be a great film for more day-time long exposures. 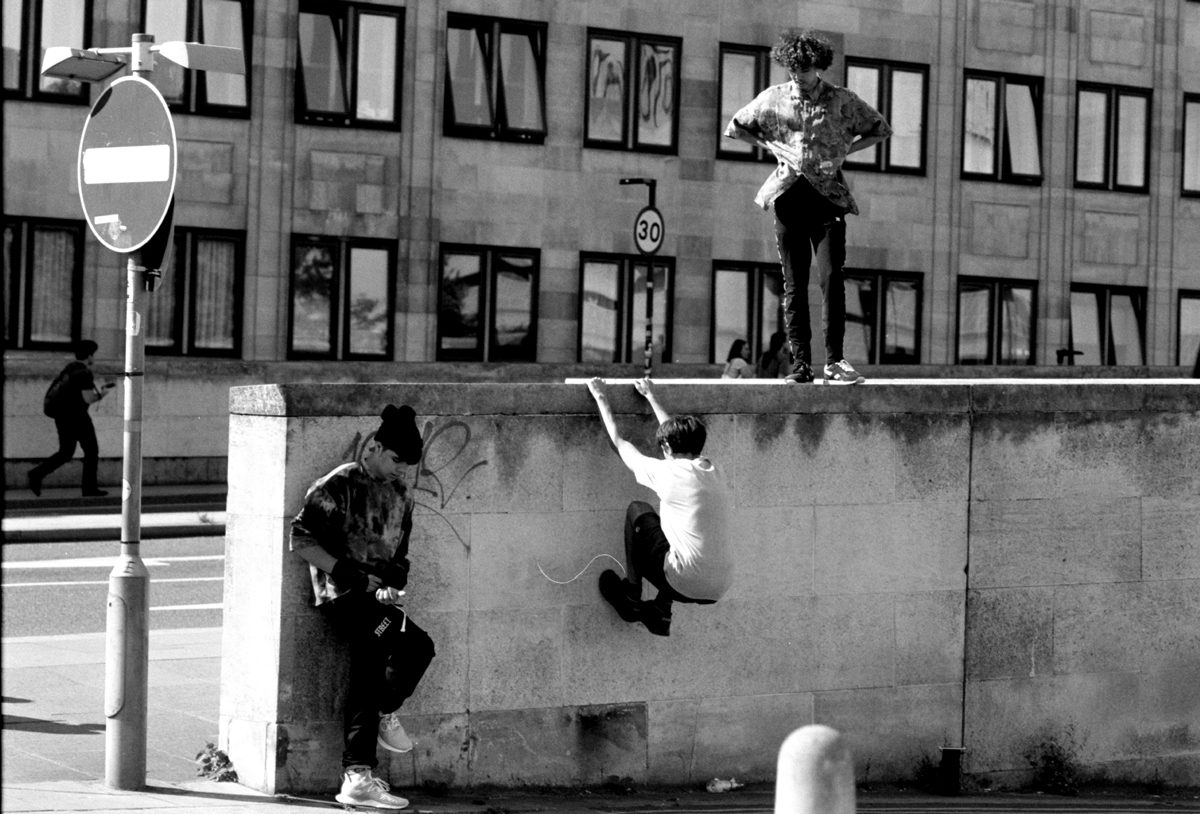 The results from this film were intriguing, especially as it was only my first roll. The contrast isn’t quite what I was expecting.  I thought that as it's a “classic” plus film,  it would have grain similar to HP5. (Or feel very nostalgic like FP4).  Instead, the grain is very fine, and doesn’t play as much of a role in the feel of this film as other aspects. 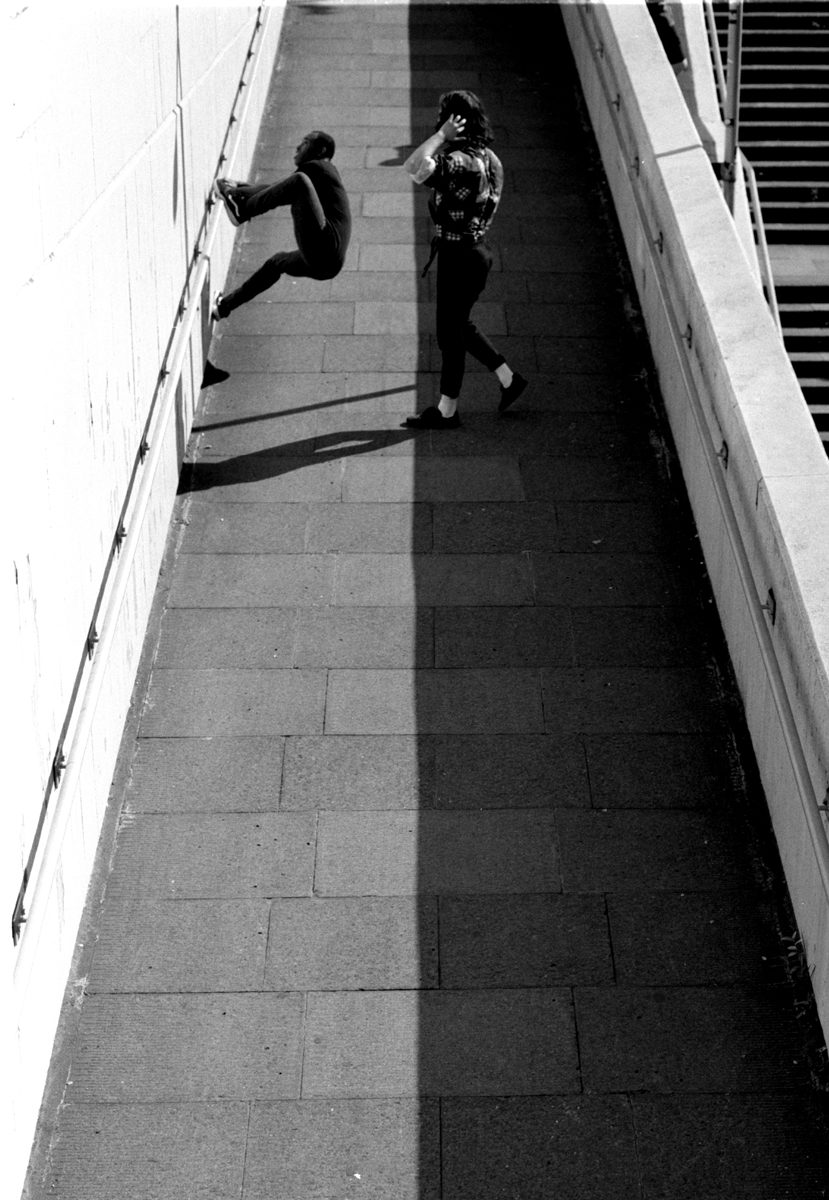 It was really nice looking back over these rolls. They showcase the diversity of subjects I shoot and also the strengths of all of the films. They all offer something slightly different. I’m happy with the way I used this to bring out different feelings from the different situations. I think this helps the results to feel more natural, and not forced as some “special effect” films sometimes do.

My opinion on Delta 100 hasn’t changed. It’s absolutely the low speed film I’d choose to shoot in almost any high light situation. FP4+ is wonderful, and so close to my results from HP5+ that I would definitely shoot these as a pair when on assignment and needing the consistency between looks.

The roll of Pan F 50 was intriguing. Now that I’ve seen how it works under different circumstances I’m really looking forward to finding the time and light to shoot my next.

This was a nice bookend to my summer shooting. I’m now moving into the winter by buying up as much Delta 3200 and Delta 400 as possible, which I’ll be shooting over the next few months. The last time I wrote about my winter film photography (https://www.ilfordphoto.com/winter-in-black-and-white/) I was still fairly new at the film process,  and am looking forward to what these next few rolls will bring!