State of Mind Posted On 16th December 2021 To Magazine & Stories

And suddenly, something that looked like a dandelion head floated into view, and I stood mesmerized as it hovered before me. When I peered inside, I realized that I could see a tiny winged creature within. I turned to my mother and said, “Look at that!” But all she could see was a dandelion head.

Although I didn’t manage to see my father before he died, I stayed with my friend. During the last day my friend would talk about someone else being in the room with her, sometimes she would speak to this someone. My mother told me the same thing happened with my father before he died. Maybe it was the drugs, or maybe there really was someone with them in the room waiting to take them on. Whatever it was it seemed to give my friend a sense of relief, that there really was something rather than nothing.

Everything in the inhabitant’s series was collected from my studio garden in Malaysia. The fruit fallen from the trees, the animals and insects which came and died, whether of natural causes or with a little help from my dog. I liked to imagine them in their new environment where everything is at peace and any suffering is just a distant memory, if at all.

When I create a set for my work, some of the time a really don’t know where I am heading. The story is there but the final so-called “pre-visualized” image isn’t. And other times its already in my sketch book. The “Inhabitants of fairyland” shot (above) was the first photograph I shot for this body of work.

I was in my studio in Malaysia with some of the students from my classes, they were busy doing there own thing, when I just decided to shoot something. I pulled together some dead flowers left over from and exhibition, some butterflies from my stash of dead bugs that I've collected over the years and some fallen figs from the trees in my garden. The backdrop was an old zinc sheet that I've been trying to rust for the past seven years.

My friend who was observing how I worked jokingly said “Jeez Gadd, you managed to pull that one out of your a... ?

With my trusted Mamiya RZ67 2 pro, which I've had since university, I would take a test shot on instant, then switch to roll film, take three shots of the set before I change the angle or add to the set, then take another three shots and another until I’m satisfied that the shoot is done. Generally I would take between 4 to 8 rolls per set. For processing I use Ilfotec HC, it goes along way and I can re-use it for a number of rolls. With contacts I would spend a day or so printing some straight shots onto the same paper that I would use for the final print. This way when I experiment with toners, bleach and colours I know how the final will end up looking.

Inhabitants of fairyland - 2017 (edition 4) Early stages of painting for my solo exhibition in Jeonju, South Korea 11/2021

During printing I don’t really stick to a specific size, it’s about how I am feeling at the time. For the bigger prints I really have to be in the right frame of mind and know exactly how I want the final prints to look. No one can be around me when I print big, I have custom made trays which take up a lot of space and chemicals, also I use roll paper, so I make sure to print the complete edition plus a couple extra for experimenting, which generally finishes the roll. 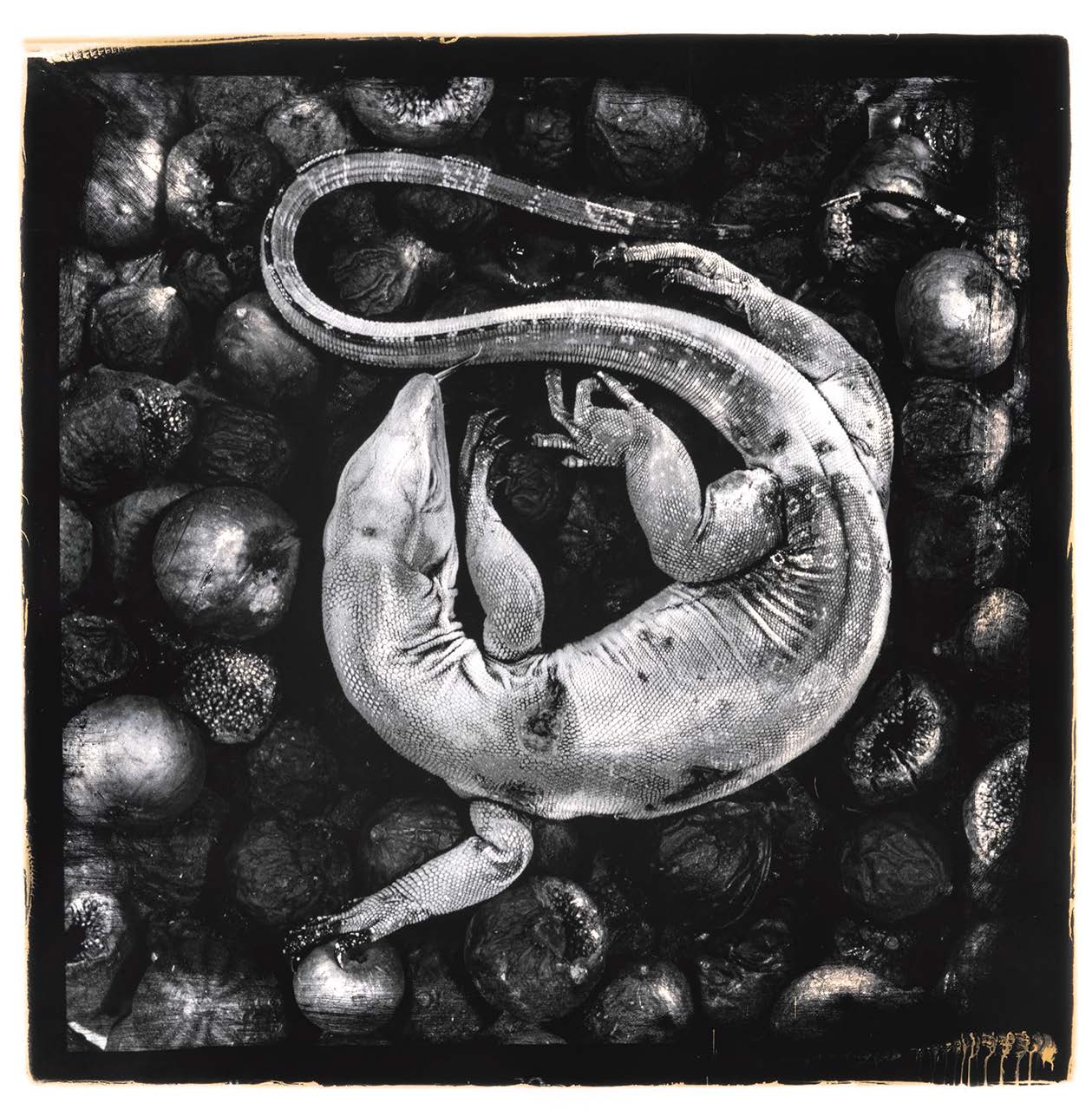 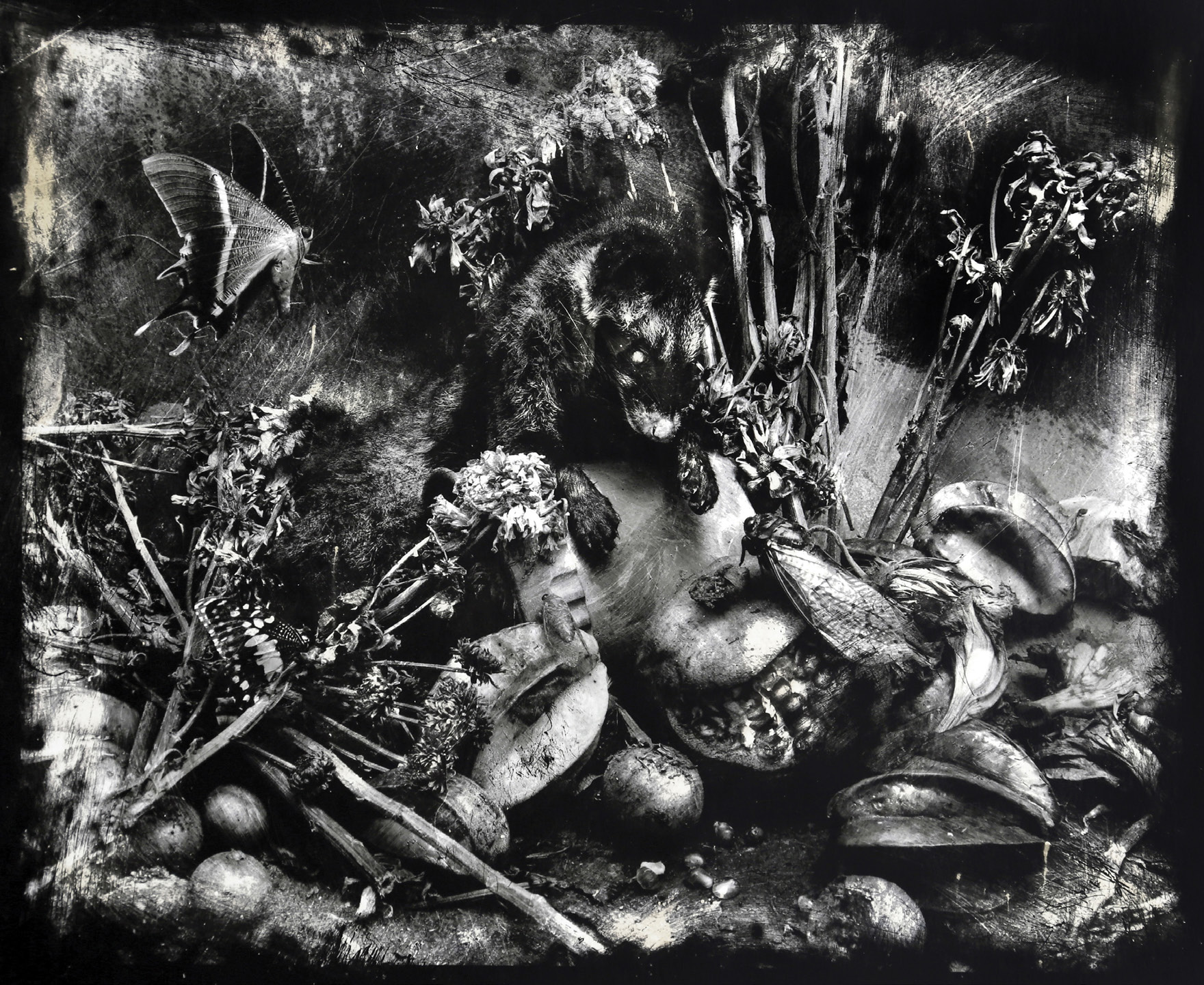 When I shot this series, at the time my studio was in Malaysia, it had a large tropical garden with banana, fig and star fruit trees, and with it a lot of wildlife. Most mornings, thanks to my dogs I would wake up and find something laying dead in my garden. On one occasion one of my dogs was sniffing at what I thought a dead monitor lizard, must of been about three and half feet long. I picked it up by the tail and headed into the studio with the intention to use it for a shoot. When all of a sudden the lizard started to shake itself free from my hand. I was pretty shocked but also happy that this one wasn’t a victim of my dogs.

Most of the wildlife I collect from the garden ends up in my freezer next to the veggie burgers and vodka, my students would always be hesitant about opening the freezer just in case there was something new sitting there staring at them. Some of the wildlife, especially the bigger animals would be in my freezer for a couple of years, either I would shoot them and wasn’t happy with the shots I took, or I wanted to reuse them for a different shoot.

For example, the Monitor lizard in Still-life (above) and Collector of the heart 1093 (below) are the same lizard, its just one shot it was frozen and the other wasn’t. When I’m happy with the final print and I didn’t want to use the wildlife anymore I would give them a proper burial in the garden and say a thank you for helping me create something beautiful.

With my earlier work I would keep the borders in the final print, I think this was because I always told my students not to crop their photographs, I would say to them, if you have to crop then you haven’t framed your shots properly. (I’m sure there will be a few raised eyebrows and shakes of the heads out there). But now I like to create entirely new borders using masks and bleach (potassium ferricyanide). It just adds to the photograph.

The photograph below “John” from an ongoing body of work called “State of mind” shows the frame and even shows the film I used. A straight print printed with a higher grade filter for contrast and a lot of bleach. The mirroring of the Ilford FP4 on the bottom right is due to printing through glass plate rather than using a negative holder.

I vary rarely use a negative holder, using a glass plate gives me more leeway when it comes to my final printing. 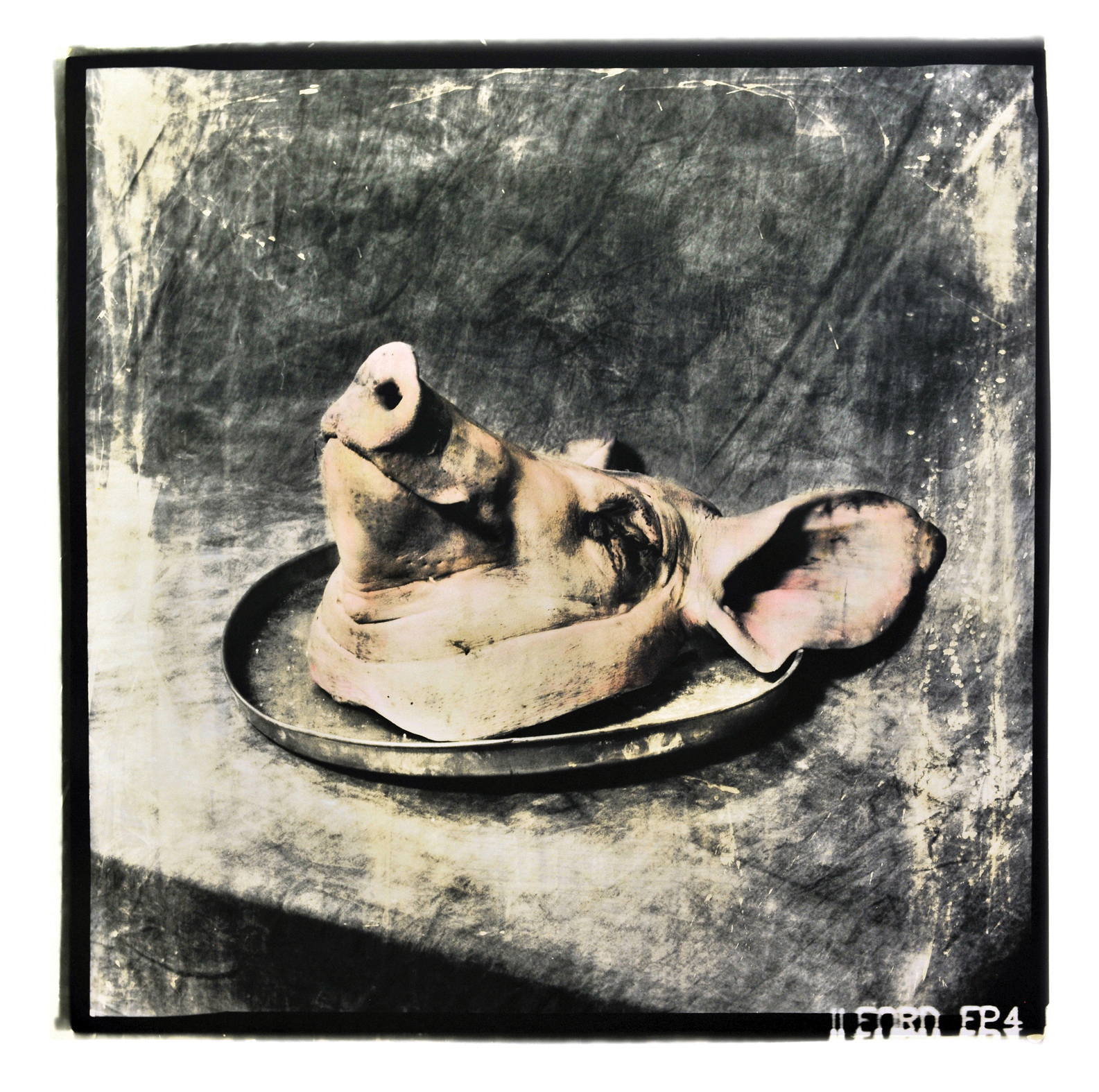 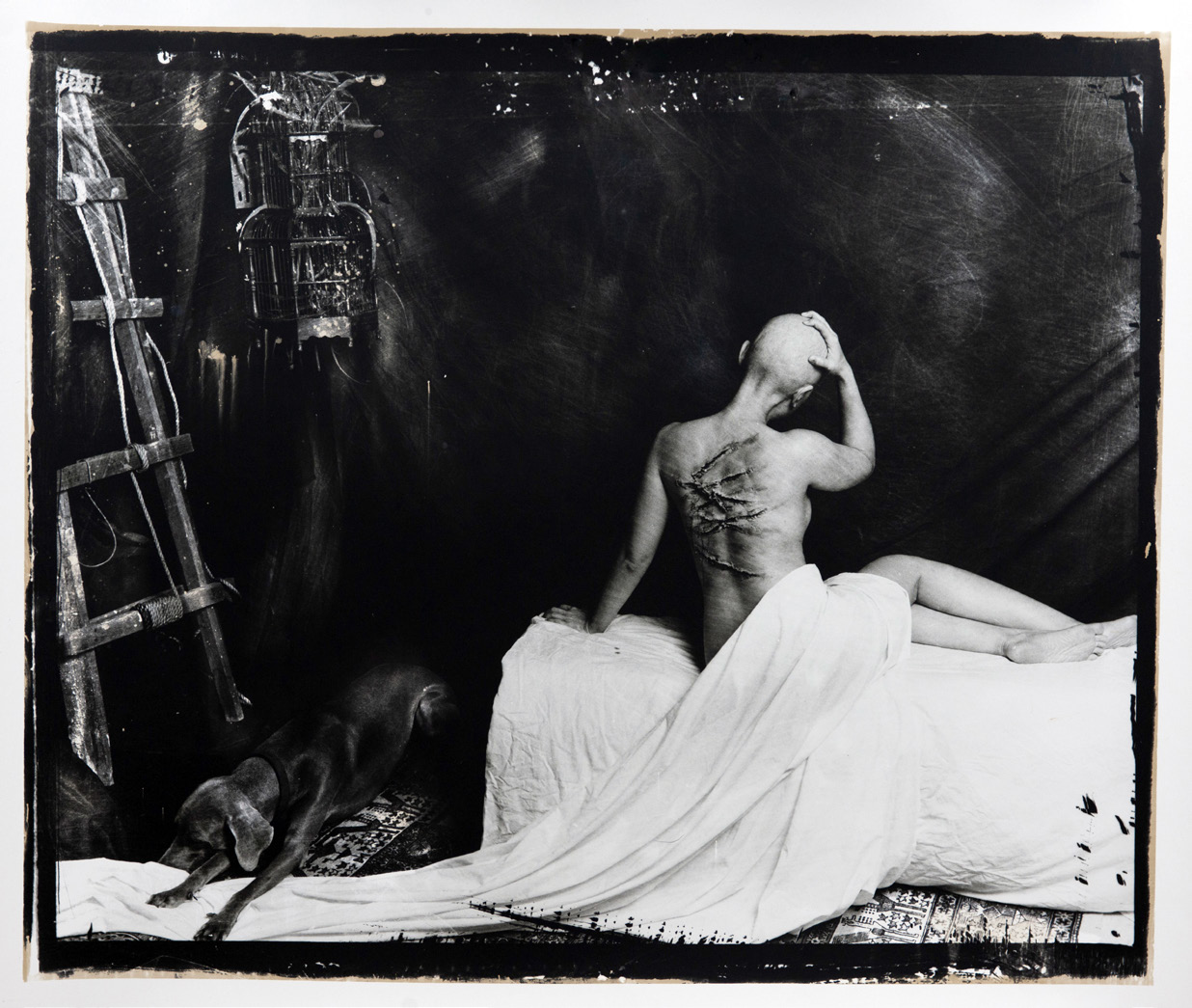 Unlike Inhabitants, although still very personal, State of mind is a response to a specific moment and is encouraged by what’s happening around me: what I hear, what I see and how I feel, whether it is melancholy, anger, humor, death, life or love, it’s a body of work that is continuously evolving, pulling in and linking to different photographic studies as it grows.

The final image I want to share is my personal petri dish. When I originally printed Waiting for purgatory I experimented a lot with different toners, bleach, paints etc. One of the tests I selenium toned using a brush, not happy with the result I quickly fixed and washed. When it was dry I rolled it up and left it standing in a giant dog biscuit tin with the rest of the rejects.

Two or three years later during a class I explained about test prints and how much paper I could go through to create a final print. I took them into the darkroom and showed them the tin full of rolls of paper. As I started opening the rolls of paper I opened up the selenium toned print. I noticed that parts of the print had turned turquoise due to the bleach and other parts had started to silver. Immediately I made some fix and washed the print properly.

I don’t think I could ever replicate this image but it reminds me why I still spend hours on end printing in the darkroom.

Paul Gadd is a British photographer living and working from Seoul, South Korea. His photography began whilst studying fine art at Epsom School of Art in the UK, when he had to photograph some of his sculptures because they were too big to move. Intrigued, Paul decided to switch his focus and acquired a BA in Photography in the Arts at Swansea Metropolitan University. When he graduated in 1997, Paul entered the Young Catwalk Photographer of the Year competition organized jointly by The Independent newspaper and Clothes Show Live and placed second out of 2,500 entrants. He was then offered a job by the legendary catwalk photographer Chris Moore and worked with him shooting fashion shows for the next four years.

Keen to explore other fields, Paul turned freelance and moved to Asia, where he began concentrating on fashion and portrait photography and participating in solo and joint exhibitions. After a few years of working with fashion magazines and shooting commercial work, he turned his interest back to film photography. Since then his commercial career has focused mainly on documentary shoots for magazines.

In 2011 Paul jointly run a photography studio and gallery in Kuala Lumpur, Malaysia called The Print Room. Here he would teach the traditional methods of film photography and darkroom printing, also curating exhibitions for professional and the small community of emerging analogue photographers that The Print Room has created.

The Print Room Malaysia finally closed its doors February 2020 and moved to Seoul, South Korea early 2021, and officially opens to the public towards the end of 2021.

A camera from a different era: Graflex RB Series B

My Graflex RB series B is an inspiring and challenging camera. It promises great results but doesn't give them...
Read More