The first time I photographed skateboarding was in the year 2000, following around a boy I liked with a disposable camera. My equipment and film stocks have gotten better over the last two decades, and my girlhood crush has been replaced by a deep passion for capturing the unique poses of skateboarders and their culture and community. 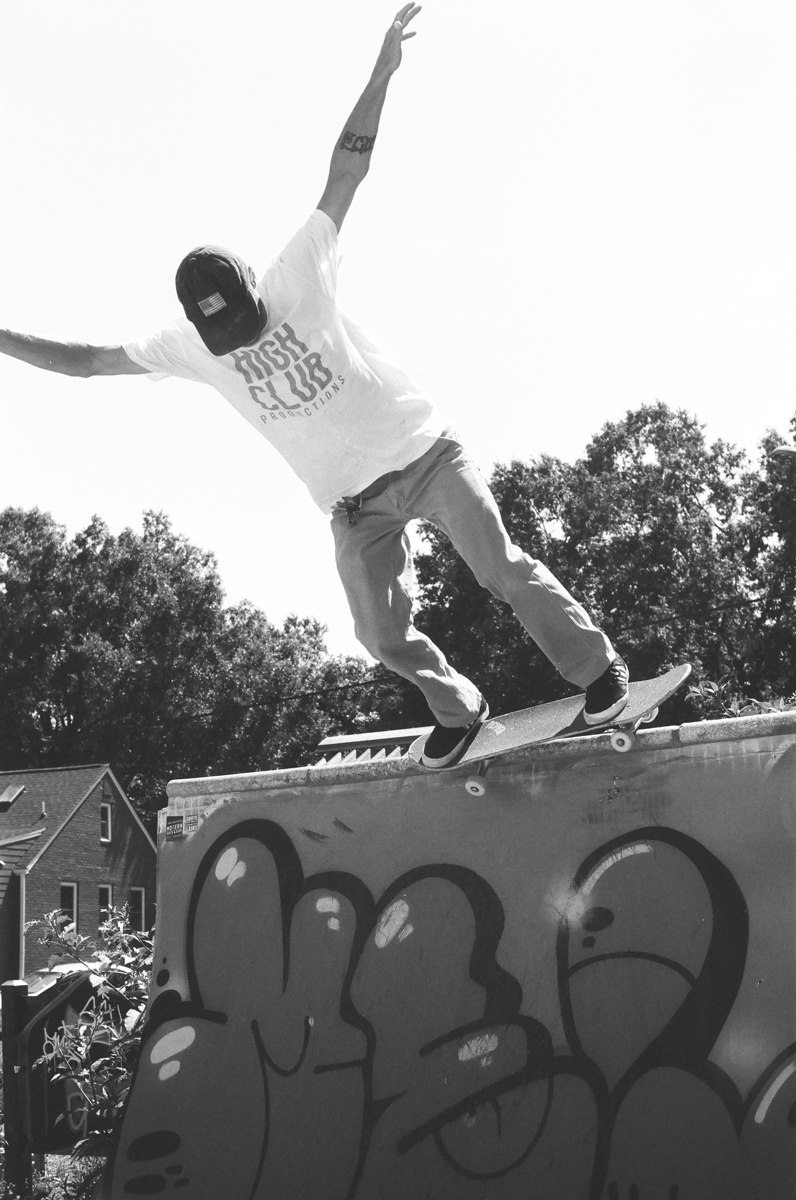 I don’t know the names of most of the tricks the skaters I photograph are attempting. I’m half-listening when someone tries to explain them, and I don’t care if the tricks are landed. I’m interested in the shapes the skaters’ bodies make, particularly when caught midair, the way a skater hovering over his board can resemble a bird taking flight or a dancer suspended in space. I love the geometric lines created by their bent elbows and knees, sometimes taking on an almost staircase effect, arms and legs frozen in near-perfect 90 degree angles. When I go to the skate park to photograph, I am most drawn to those who are not afraid to launch themselves skyward. 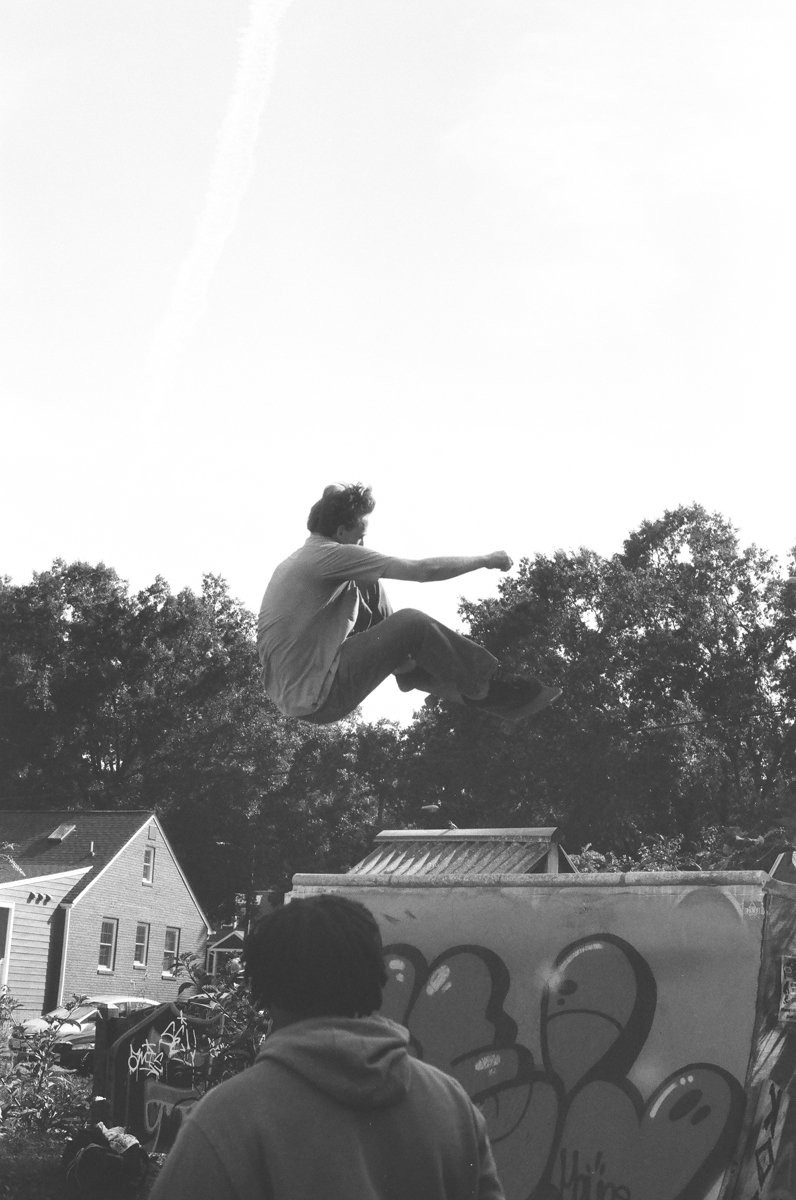 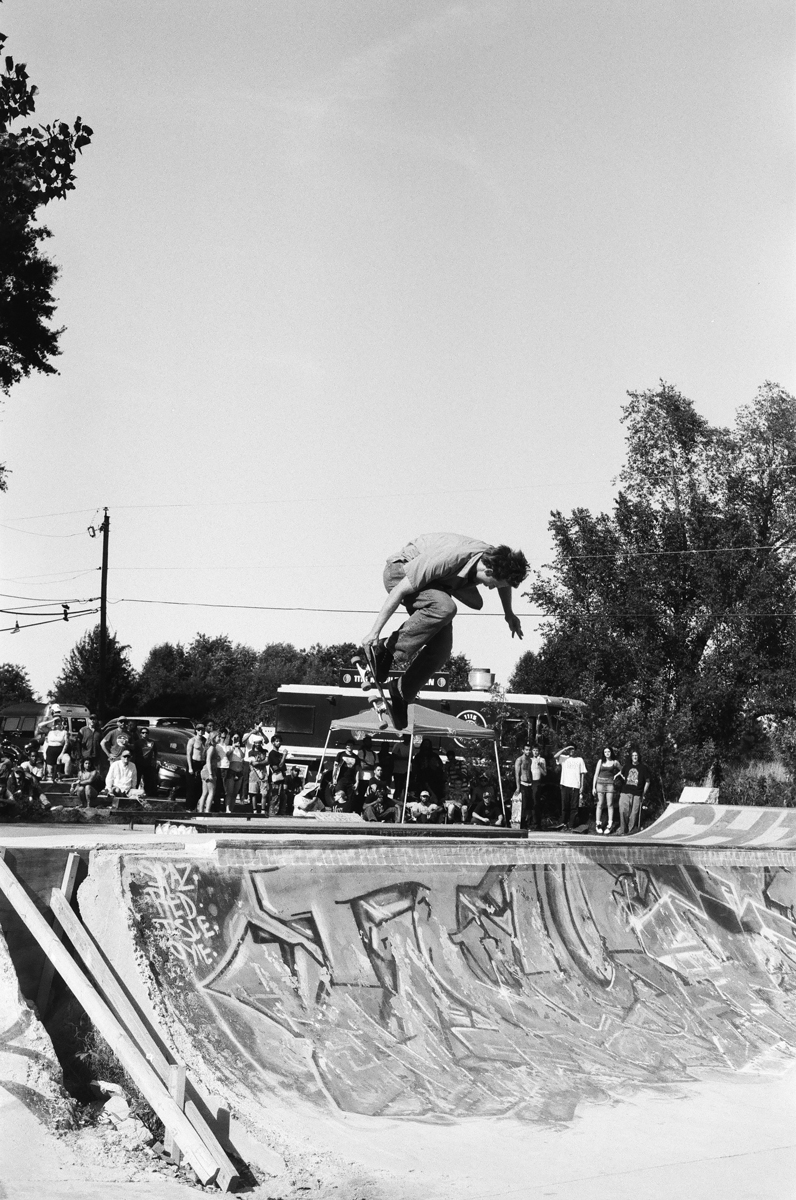 Usually I show up to a park alone and lurk around the perimeter for a bit, watching the skaters and figuring out who I want to photograph. I mostly shoot 35mm on a Pentax K1000 and a Minolta X-700, both of which focus manually, so it helps to narrow down a spot on which to focus the lens and wait for a skater to pass through. I look for dynamic skaters catching lots of air and which ramps they’re using, and let them skate through my frame a few times without firing the shutter so I can get a clear idea of the shot before taking any actual photos. 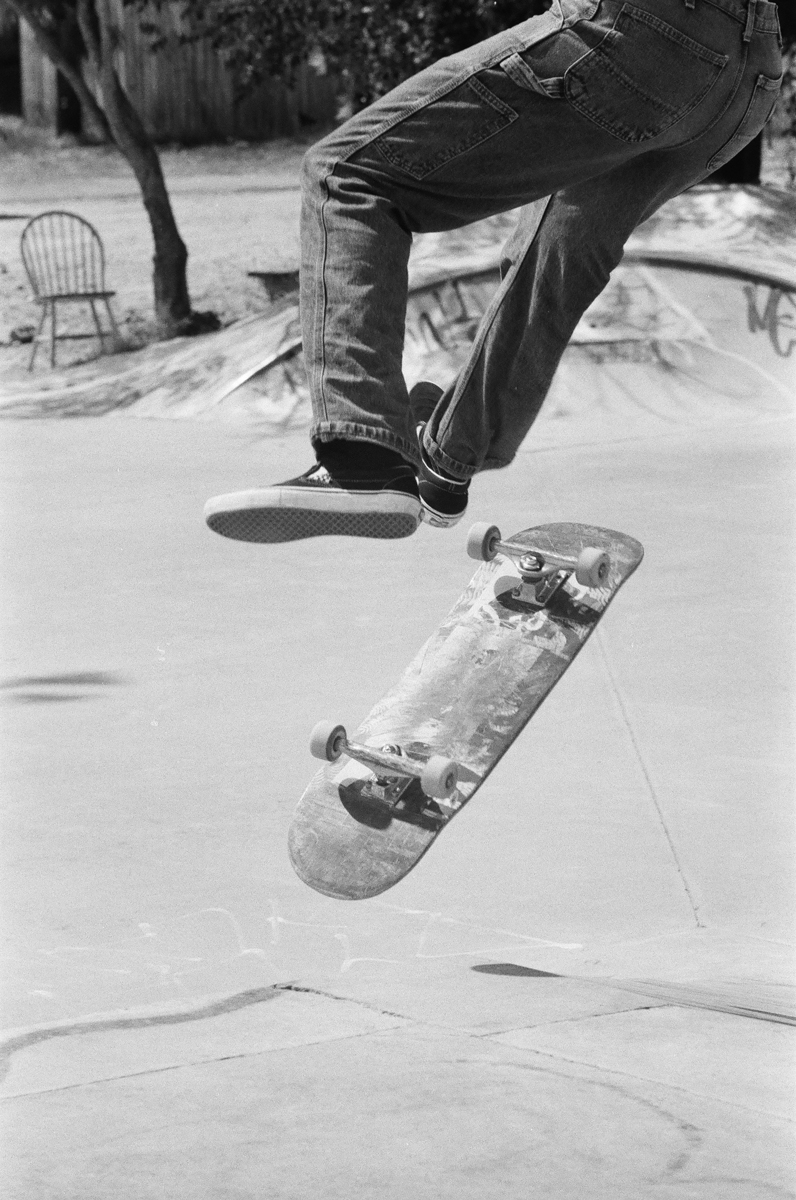 When the shots are killer

It takes practice to learn exactly when to fire the shutter, but lucky for me, most of the skaters are also practicing their tricks over and over, and there’s usually a chance to catch it again. They don’t seem to mind my presence, and I even get the occasional, “Is that a film camera?” I always try to connect with the skaters on Instagram later so I can send them the photos I took, especially when the shots are killer. 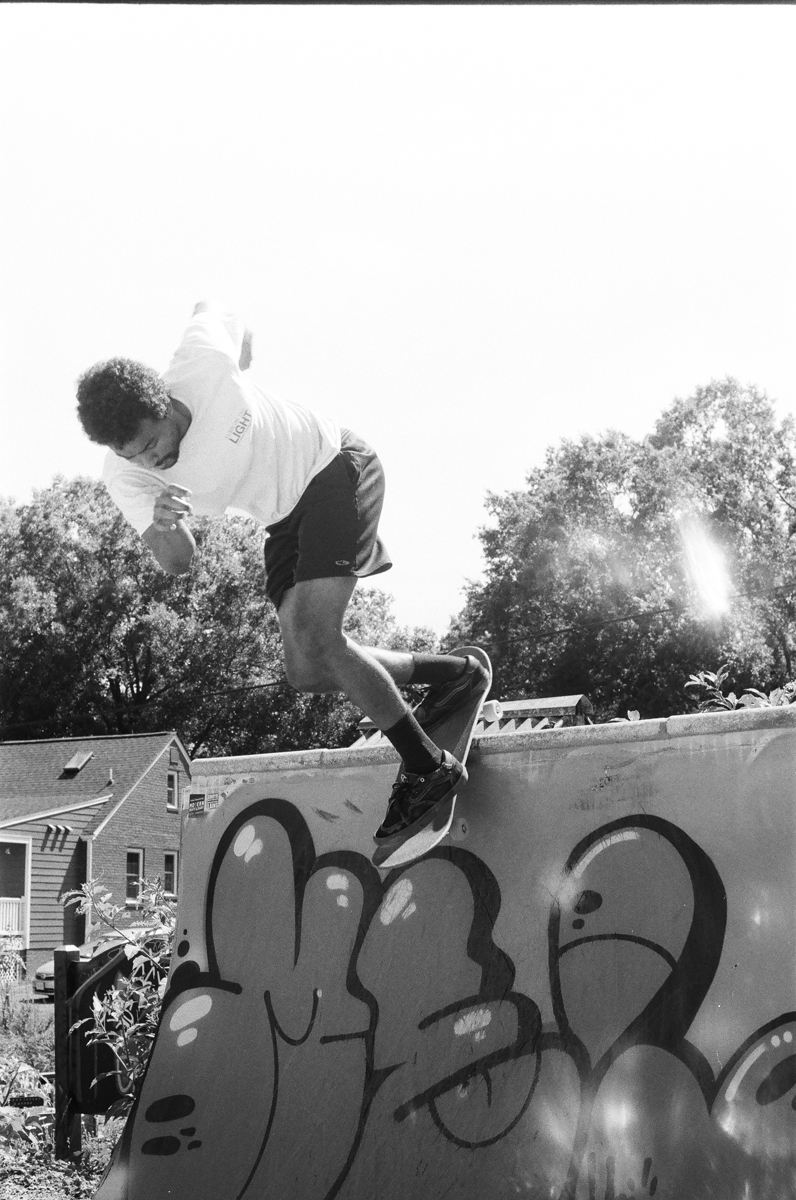 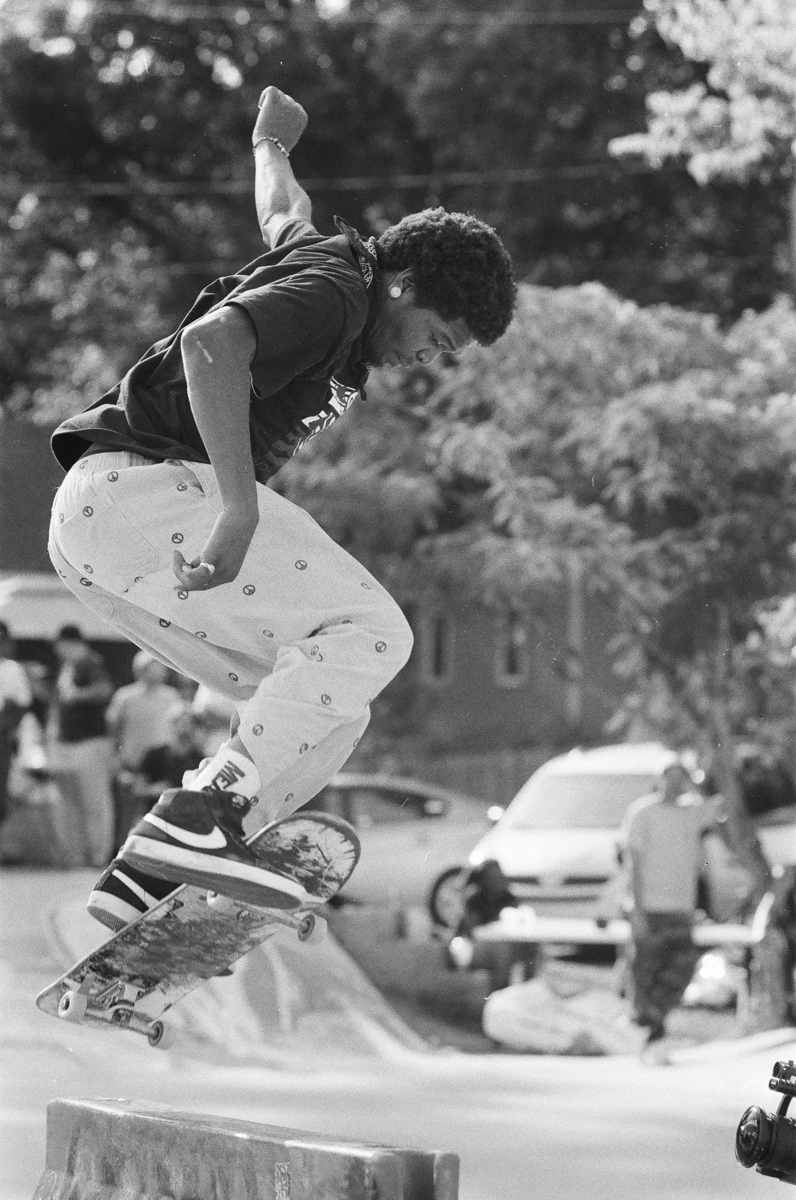 I also look for quiet moments among the fray, a lone skater gliding serenely across the concrete or waiting to drop in with his board poised under his sneaker. In a collection of photos, those still moments offer a breath between action shots and a more complete sense of the vibe of scene. I love when there are multiple skaters in frame, zipping in different directions or milling about the edges of the park, looking almost like children on a playground if you erase their boards from the image. 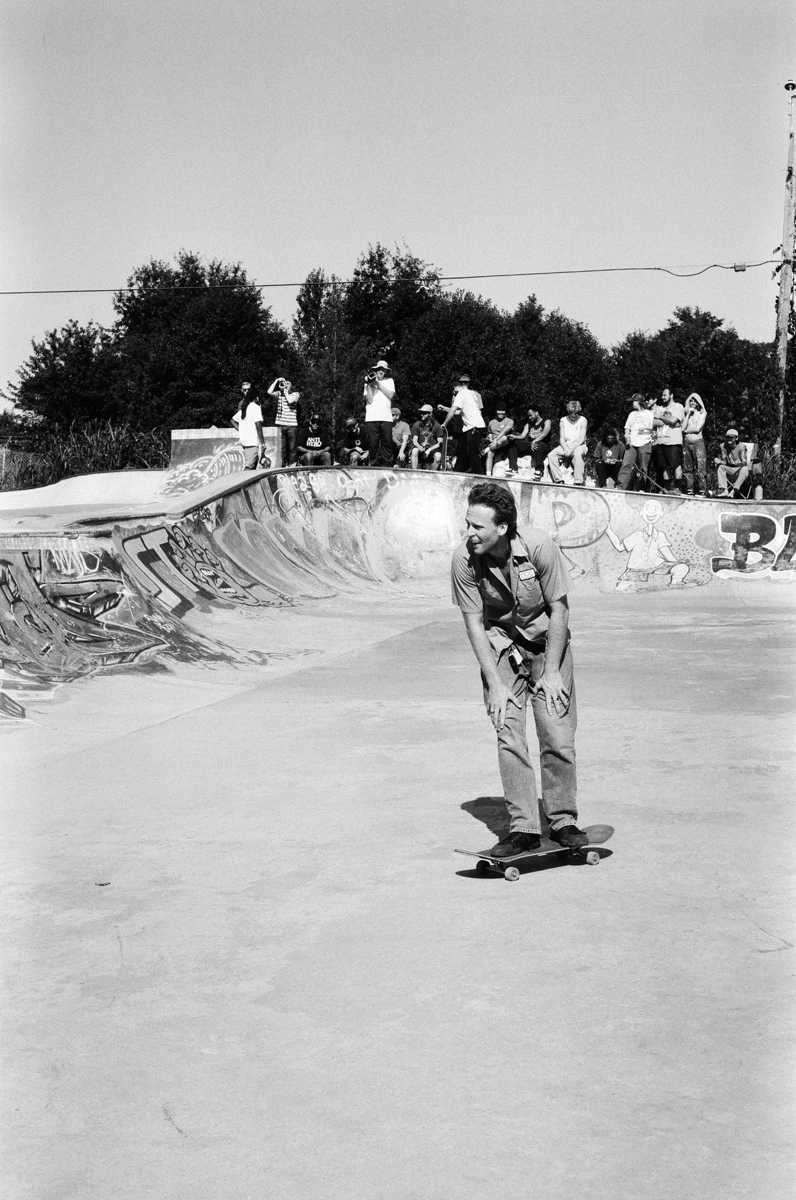 I prefer to shoot skate in black and white, and gravitate towards Kentmere 400 for its versatility and affordability. Shooting in black and white versus color helps take the focus off unavoidable background noise like trees and parking spaces so the eye can focus on the figure. Fast moving, unpredictable subjects require a keen eye and quick shutter finger, but with a less expensive film stock like Kentmere. I can afford to burn through a few rolls to be sure I get my shot. I also like that I can shoot Kentmere in a range of light conditions, from bright sunny days with lots of contrast to mellower overcast skies, and achieve optimal results, as well as push my shutter speed to 1/500 or 1/1000 for reduced blur. 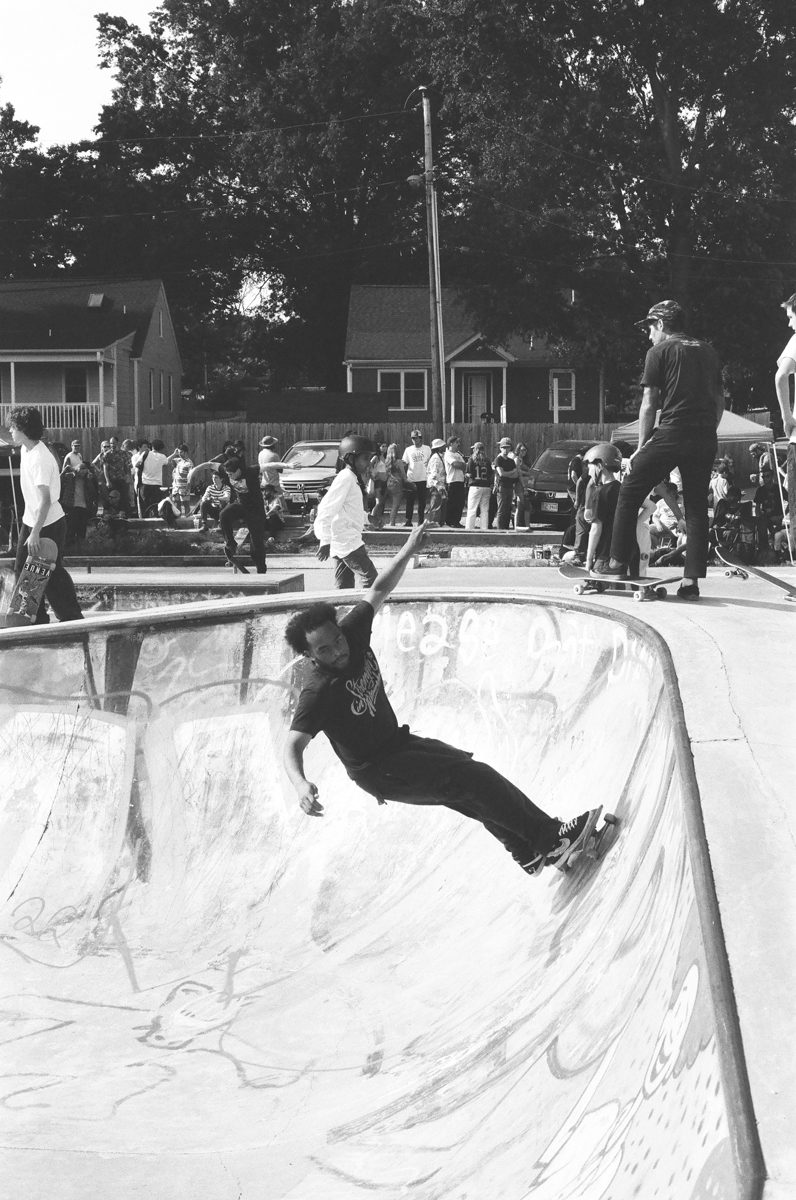 Lydia Armstrong lives in Richmond, Virginia, where she is a member of the Glossed Over Photo Club promoting community among Richmond’s analog photographers. Her photographs have been published by Porter House Review, Unstamatic, Saw Palm, and the Associated Press. When not taking photos, Lydia can be found writing and snuggling her cats. More of Lydia’s photography can be found at www.thicketoftrash.com and on Instagram at @thicketoftrash.

Small Fishing Village My Name is Austen Goldsmith I live on top of a hill on the outskirts of a small fishing ...
Read More

#orangefilter is the perfect match for black and white film, giving bold contrast between the sky and clouds. ...
Read More