Clitheroe is a small market town in Lancashire, famous for its witches, good food and drink. And, (maybe) having the smallest Norman keep in England. Each September, it hosts the Ribble Valley Scooter Rally - a gathering with music, vintage clothing stalls, and a ‘ride-in’ of several hundred scooter enthusiasts. Previously known as the Ribble Valley Mod-Weekender, the event is a melting pot of different sub-cultures; Mods, Skinheads, Scooterboys, and every other conceivable splinter group, get together for a weekend of music, bonding, and booze. In 2016 I attended for the first time - with my Leica M6, Nikkormat FT3, and a pocketful of HP5. I’d return for a further three events in 2017/18/19. In May 2020 I self-published a culmination of the work as a small zine, “Mods”, which is currently available on my website. 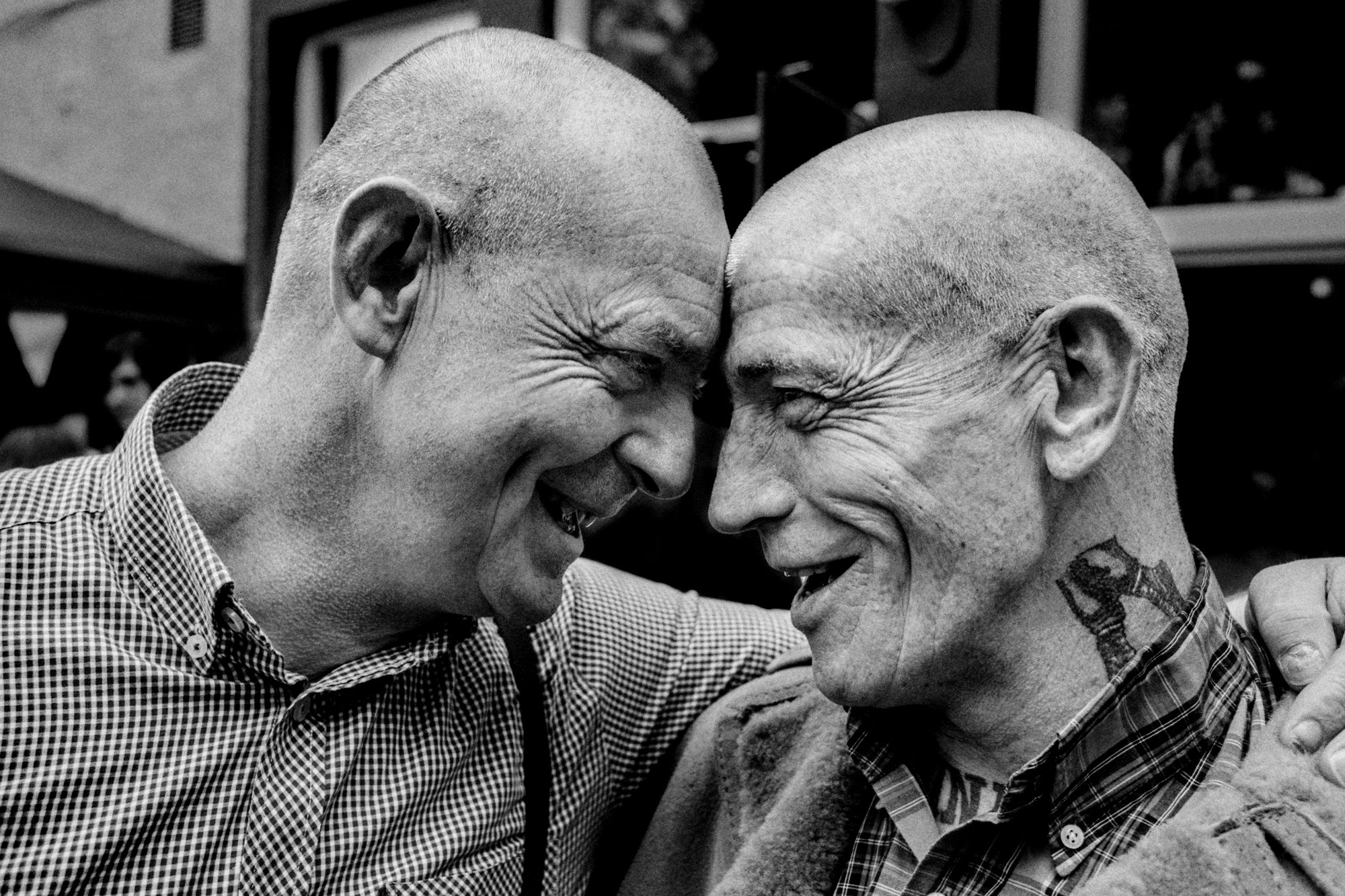 It was a forgone conclusion that I’d be using HP5. At the time I was working almost exclusively with it - normally metered and pushed to 800 in daylight and 1600 at night. I wanted to emulate the gritty black and white press style of the 1990s (sharp grain and high contrast) developed in fine grain, high sharpness developers (initially Kodak XTOL stock as one-shot, but later ILFOTEC DD-X). I also needed latitude and consistency. Good shadow detail was important but the ability to shoot in inclement weather was paramount.

Camera set up was a classic photojournalist 1-2. A Nikkormat FT3, with an 80-200 f2.8 permanently attached perfect for isolating details and tight portraits, and a Leica M6 with 35 f2 for everything else imaginable.

Photograph until you run out of film

The idea was simple. I’d arrive at Moor Lane, a steep one-way street leading up to the rally’s meeting point at The Rose and Crown, where I’d have a good line of vision down the road to photograph the ride in. Shooting digital for news/stock and film for my own work, I’d drop my digital gear off at home, quickly upload to the live-news agency then get back out and walk around town photographing until I ran out of film.

A typically overcast Lancashire day did nothing to dampen spirits. The ride-in was a humming mass of headlights and two-stroke fumes - I used the 80-200 to search for riders down the road who who exuded the mod aesthetic, then quickly swap to the Leica to shoot again once they were closer. I’d use this time looking down a long lens to study people as they advanced up the hill, occasionally using the Nikkormat to dissect, not divorce, details. After twenty minutes of the ride-in, I’d shot three of my five rolls of film (luckily the Boots adjacent to The Rose and Crown had three rolls of HP5 in stock). 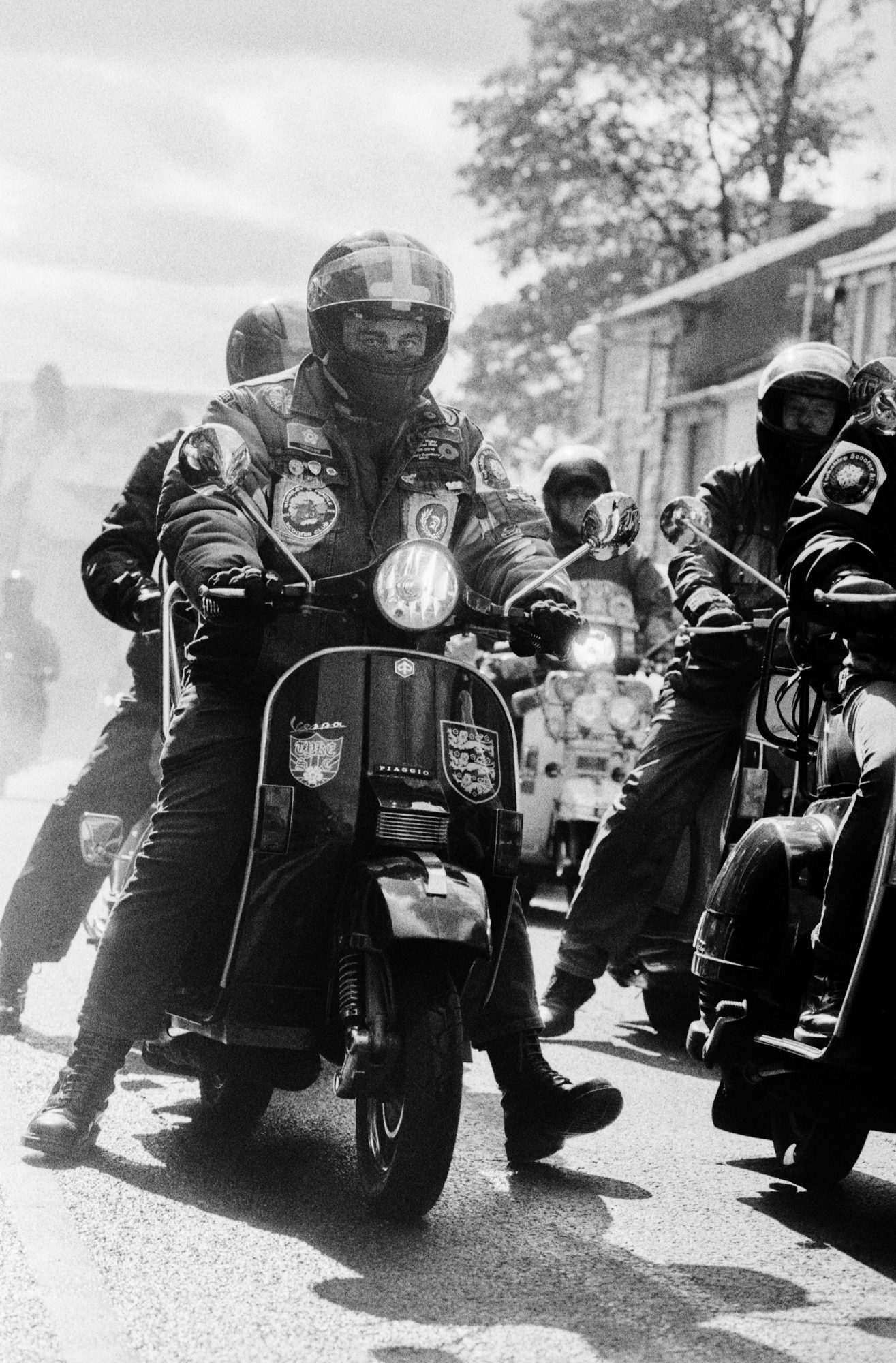 See and be seen

The rest of the afternoon was spent walking through the crowds of people and parked scooters, shooting a mixture of street and street portraiture. With various prizes awarded, including Best Scooter and Best Dressed, Mod style was performed flamboyantly around town. This made approaching people a much simpler task than usual - people wanted to be seen and to be seen looking their best. Stopping to talk with those who travelled from far and wide gave me insight into the personal worlds behind the style and culture. I shot every roll I had available to me - finishing up for the day just after midnight. This day in 2016 set the tempo for every consequent festival: photograph the ride in, walk around town photographing and talking, leaving only when I had nothing left to shoot and everyone was more interested in partying than talking with me. 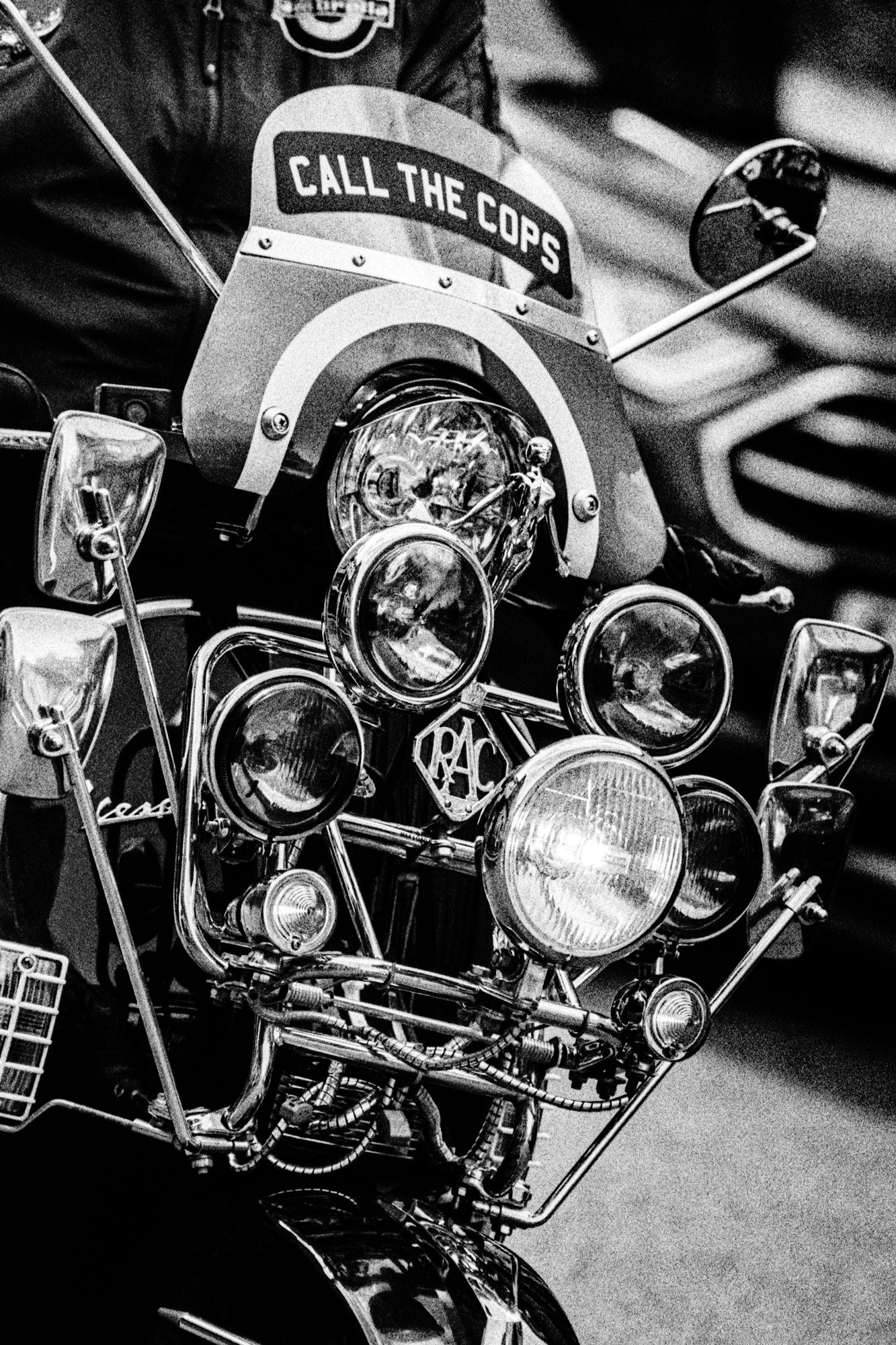 Mod culture is awash with totems. The RAF roundel is the most notable, speaking to a culture lived through time. A shared enjoyment of The Who, Ben Sherman, Vespa/ Northern Soul, Dr. Martens, LML/ The Happy Mondays, Fred Perry, Lambretta - and any combination of the above. These symbols, bands, and brands adorn the wearer, transforming them into peacocks for their subculture. Patches and badges declare allegiances, loyalties, and past glories - Brighton and Bournemouth, Margate and Morecambe. A patch emblazoned bomber jacket or parka declares, “This is who I am. This is where I’ve been. This is what I love. This is what I believe.”

It is, quite literally, wearing hearts on sleeves… chests, and backs.

In 2017 I met Paul, and asked if I could photograph a tattoo on the back of his hand. Obligingly, he let me, before saying he’d prefer I saw another one. He unbuttoned his polo shirt and revealed the tattoo of a Mancunian worker bee and a date, explaining the loss of his step-daughter in the Manchester Arena Bombings, earlier that year. Paul led a spontaneous scooter ride out to St. Anne’s Square in Manchester with dozens of scooterists, leaving flowers at the de facto point of remembrance. Over the years shooting this project it was this same sense of a larger community and shared passion that inspired me to return. Year on year, the same faces would gather in Clitheroe - glad to be reunited, assessing modifications to scooters made over the previous twelve months, and enjoying music that initially brought them together. 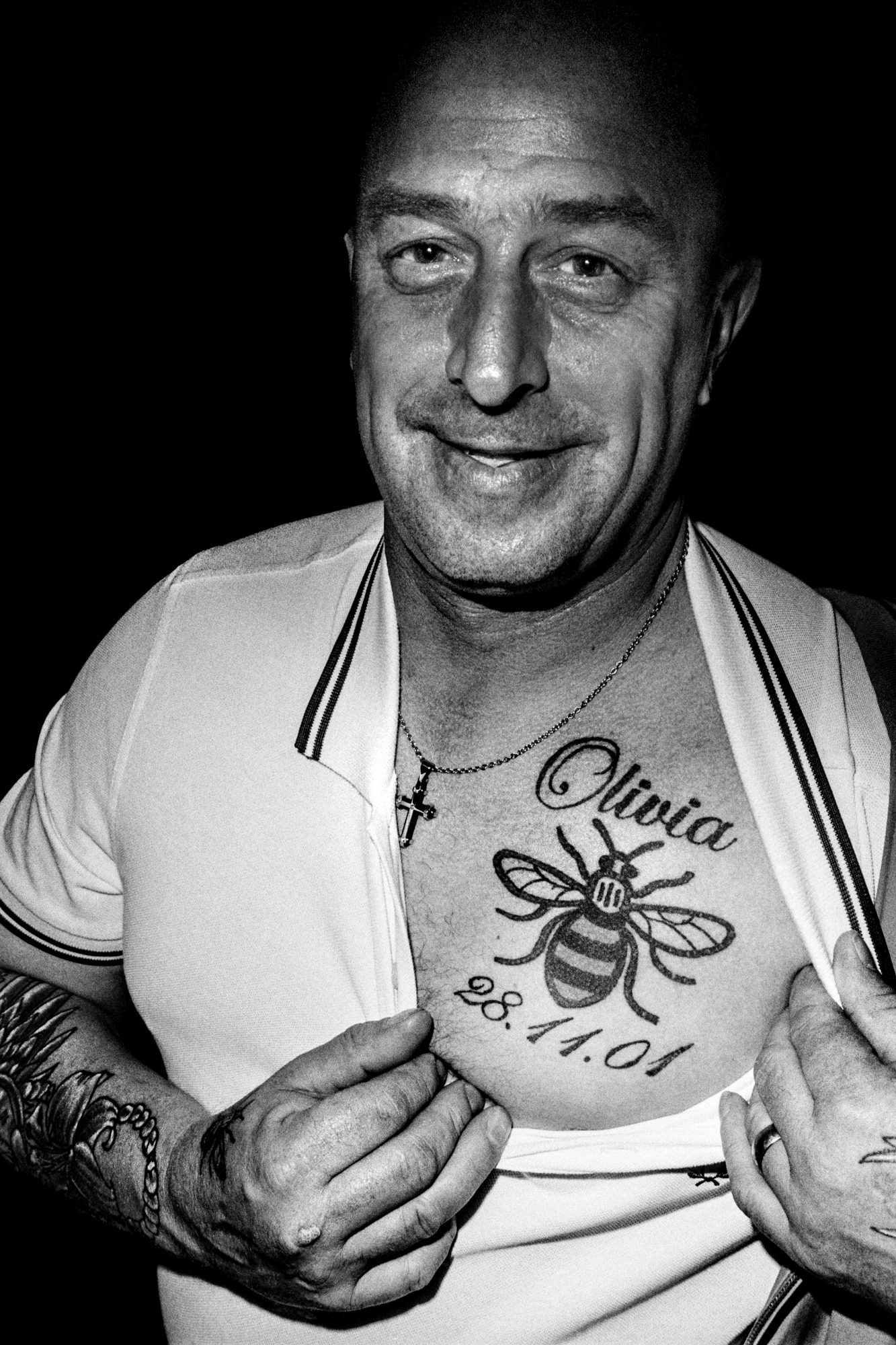 Over the years, another major theme became more apparent - alongside scooters adorned with all manner of kitsch, ranging from Apocalypse Now and TV meerkats, to the Kray twins - was distinct and insidious nationalism and racism. Patches declaring sentiments like, “British by birth, English by the grace of God.” and “England, either love it… or fuck off…” accompanied by a picture of Churchill, were commonplace. As was, to a lesser degree, the presence of Golly's - on Robinsons jam badges, club logos, and in one case tied to the back of a scooter.

These symbols brought into sharp focus the ageing of the culture - the once niche and radical eventually becoming populist and conservative. ’The good old days’ was a frequent reference worn on scooters and jackets and it seems there’s a palpable yearning to return to a past ingrained in the culture I saw - warts and all; the subjectively good and the objectively bad. The rally had become, in my mind at least, a microcosm of a Britain post-Brexit referendum. 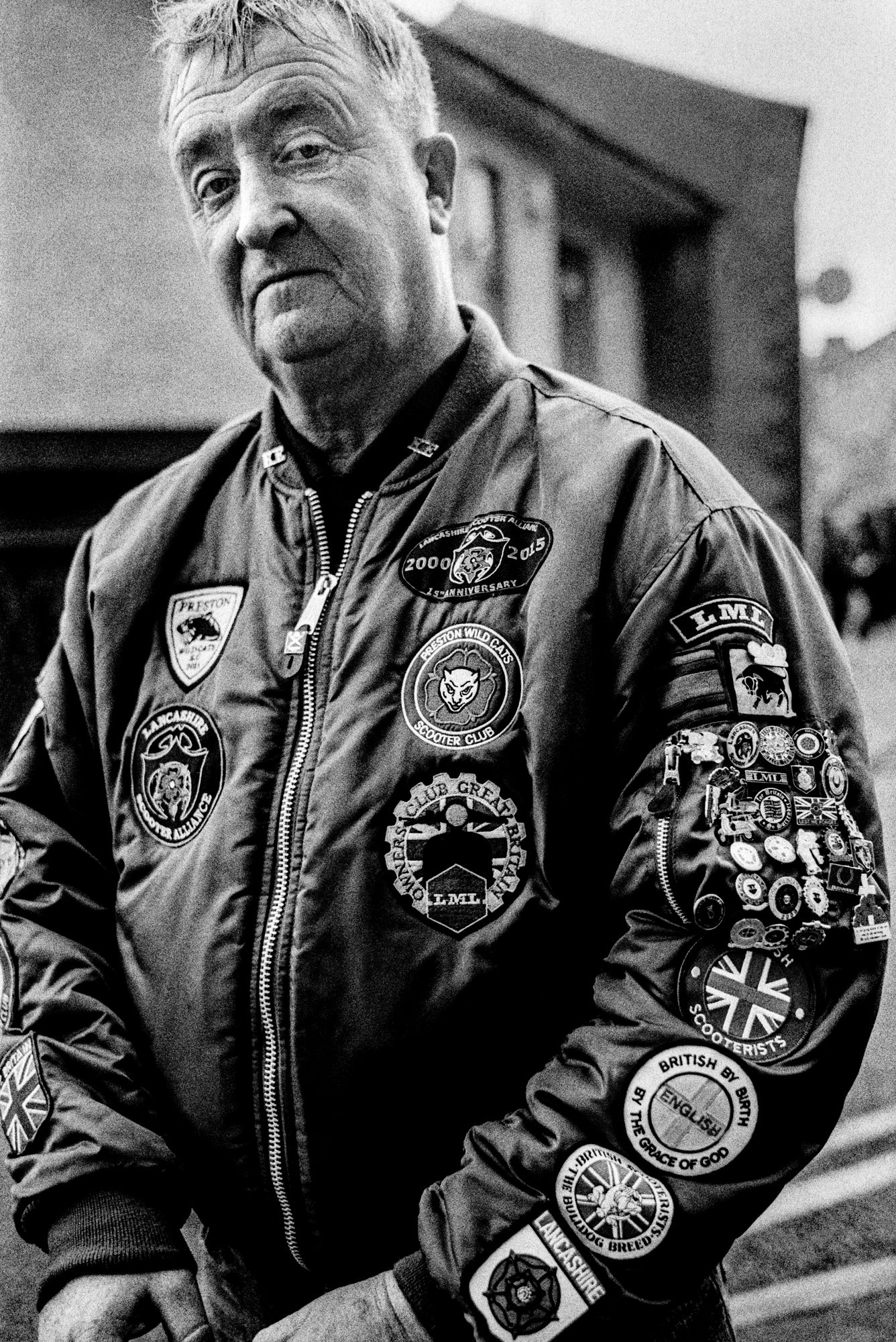 Four days, over four years, had netted dozens of rolls HP5. I’d developed and scanned each roll at home - with very little change in process. The Leica had been with me every year - as was the Nikon 80-200 but the Nikkormat gave way to a Nikon F3HP and later the F100. The work I’d made was always very much about the people of the event: the Leica M6 was the tool that helped me tell these stories best, the Nikon kit helped me find the little details that make stories more nuanced, more compelling, more whole.

This is what was most important to me when sequencing the work for the zine. The telling of a complex yet distinct personal truth.

The final frame from my series is a ‘first of the roll’ shot- with ‘film burn’ obscuring half the negative. A fitting testament to a culture which, whilst waning, has a long history of rebirth and revivals. 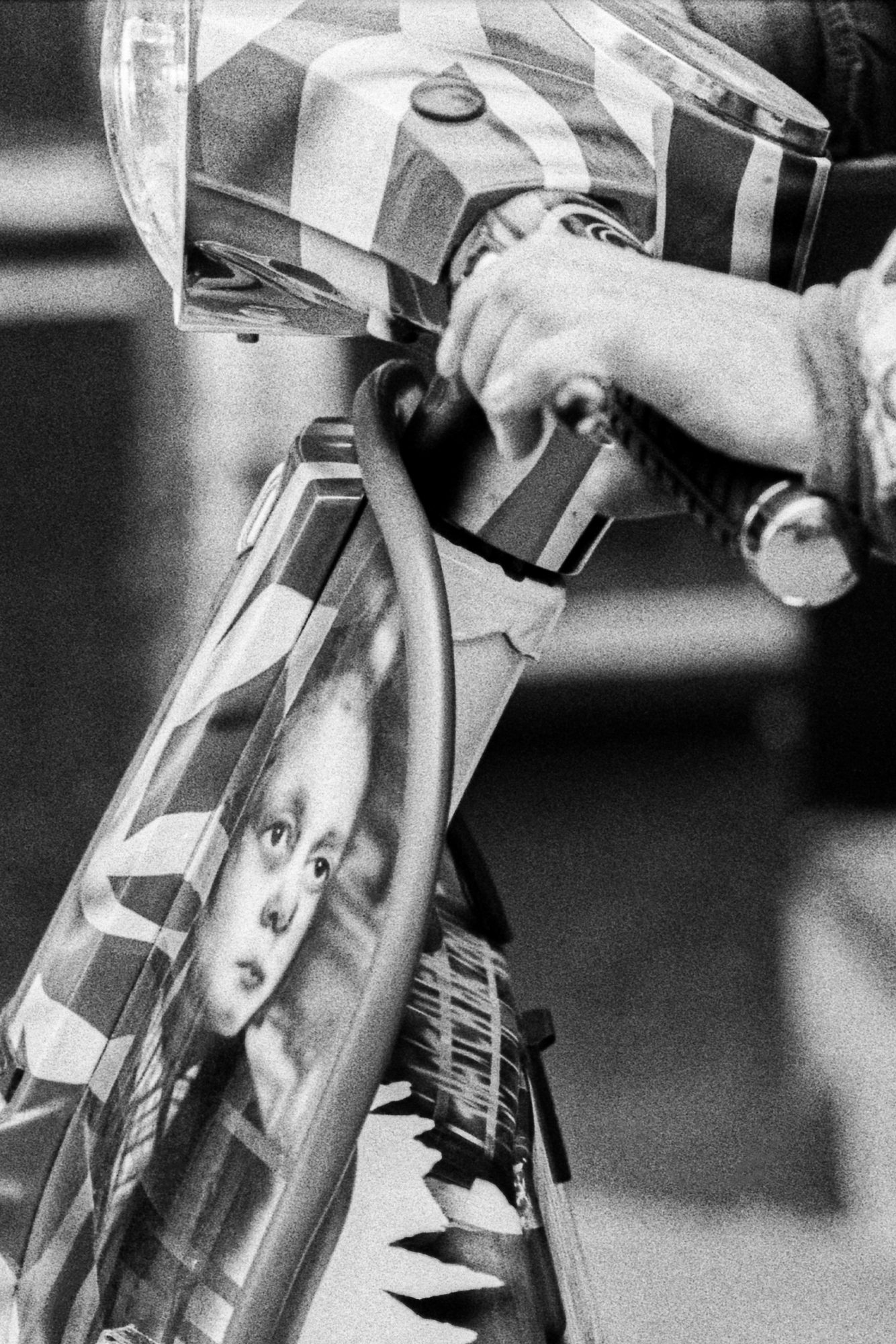 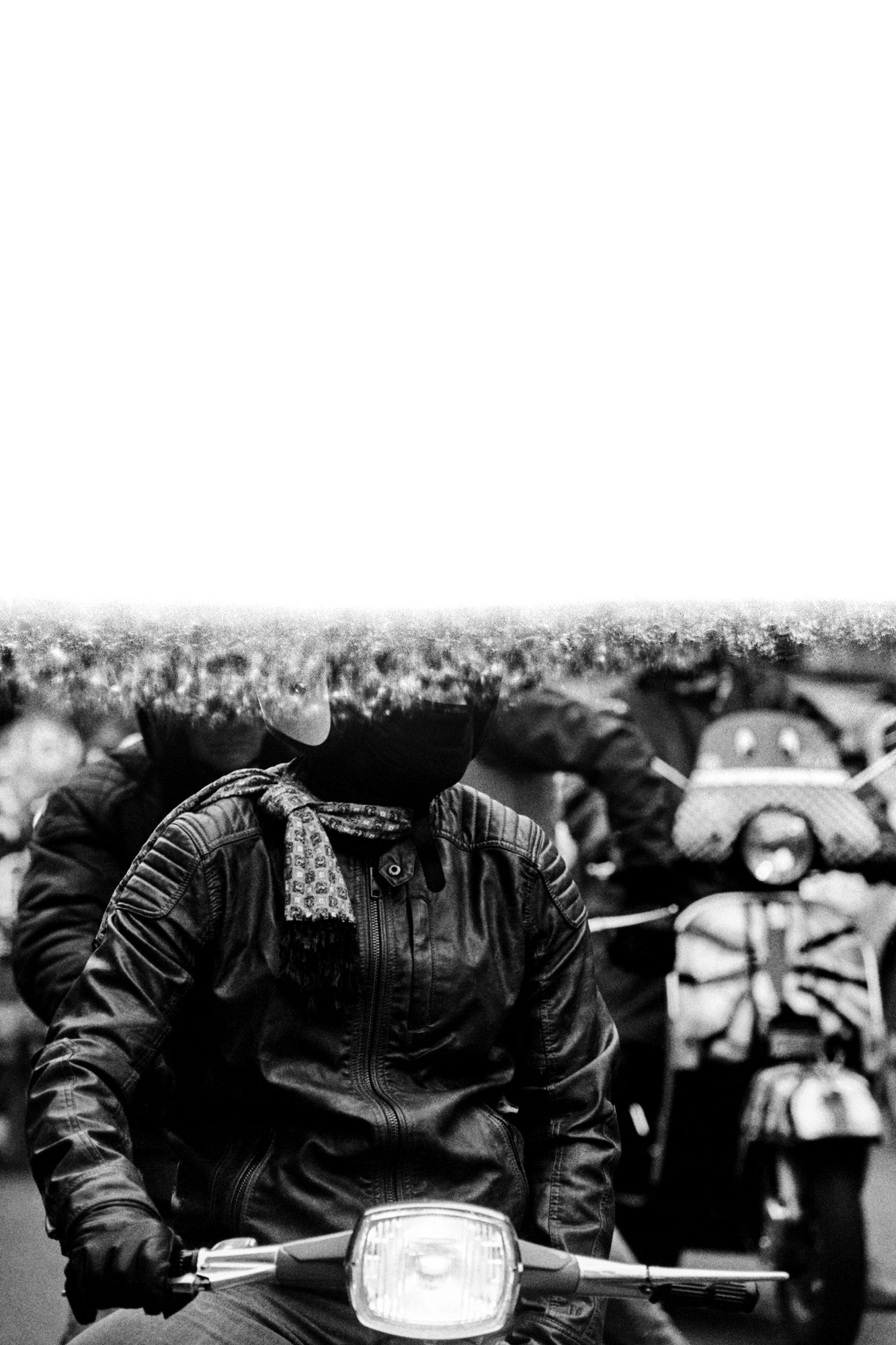 Matthew Fleming is a photographer based in the North West of England.

He studied History at Lancaster University.

Photographing from a young age, Matthew started shooting “seriously” when he was twelve years old. Developing a taste for film photography, Matthew specialises in documentary, street, and travel photography with a classic, refined style.

His work explores cultures, people, and places with an authentic and candid technique. He is happiest with a pocketful of film, searching for the next thing that moves him most.