Soon after leaving my staff photographer’s position on the local newspaper where I’d been employed for the previous 5 years and with the luxury of in-house film processing no longer a convenient option I began using my local city centre professional colour lab, in Coventry.

During the accumulating hours I spent in that lab waiting for my 35mm films to process, watching small colour prints dropping from the conveyor belt from the end of the machine, I very watched a short Indian man shuffle in through the door of the lab collect a small package of photographs then shuffled back out again.  It was not until 2015 I discovered that the diminutive and unassuming figure was Mr Maganbhai Patel, the photographer known as Masterji. Masterji left his home and job as a mathematics teacher in Ahmedabad, Gujarat soon after India gained Independence from the British. He arrived in the prosperous English city of Coventry to meet up with friends and many other recent migrants from India in 1958.

To earn enough money for food and board he took a factory job, sharing cheap accommodation with his Indian friends. This was not Masterji’s future– he had come across the world to make his mark.

Masterji had been nurturing an interest in photography, bringing with him from India a Box Brownie camera he used as a hobby. Unfulfilled with his mundane day-job, Masterji soon sought the company of creatives and struck up a friendship with local studio photographer John Blakemore, who was at the very beginning his own illustrious photographic career. Time spent on evening courses at Lanchester Polytechnic and weekend courses with the GEC Photographic Society led to work, including photographing the visit to Coventry of the Indian High Commissioner and then onto portraits of the burgeoning south-Asian community. This led to a 1962 licence to start the Master’s Art Studio on Stoney Stanton Road, Coventry, which still exists today.

Even though I have been printing my own black and white photographs for thirty years I have little experience of printing from other people’s negatives. It's harder than you think, though no job properly done is ever straightforward. I recently printed my grandfather’s seventy-year-old 35mm panchromatic safety film for exhibition. A friend, the photographic historian Pete James (@patinotype), advised that grandpa’s old negatives might print a little ‘soft’. His considered assumption turned out to be spot on: whilst handling these rare artefacts, damage was always an ever-present possibility. 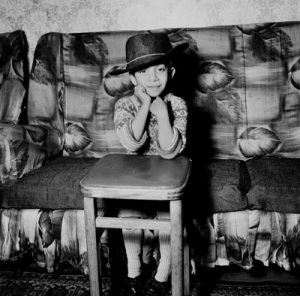 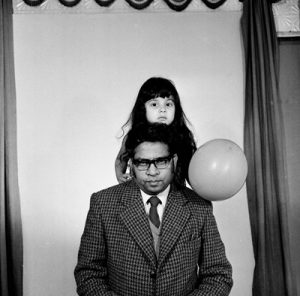 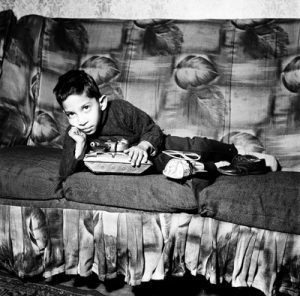 I began working closely with Masterji’s daughter, Tarla, in Coventry University’s darkroom. We began to sort through her father’s negatives on the lightbox. I was in luck that Tarla is a keen analogue printer.

We dusted off her father's negatives with a soft brush and compressed air, and tentatively placed the first one (single cut) into the carrier. After the first exposure and development, it was immediately apparent from viewing the test strips that a thorough cleansing process was necessary. Through his negatives, though debris was not visible to the naked eye, it had accumulated onto the surface of the emulsion. As with the majority of archives, Masterji’s negatives had not been kept in the most suitable of conditions: Tarla admitted that the archive was chaotic! Using a couple of droplets of photo-flow (fairy liquid original) and a little patience, Tarla and I began to first soak then gently wash Masterji’s old film.  This is not an easy process when his medium format film had been clipped from its ‘real’ into a singular 6x6 format, making safe handling and drying without damaging the film's emulsion a delicate task.

For me, this was the most nerve-racking process, but I could see from Tarla’s expression it was painful for her to watch too – this was her father’s life work, an Indian immigrant who had refused the menial jobs for migrants to be an artist. Those tough times were captured on this film, and we were the ones responsible for securing this legacy.

We had begun a restoration project and soon had beautiful fresh prints from Masterji’s old negatives.

Masterji from Nichole on Vimeo.

Processing your own film can speed up your workflow and give you quicker access to your negatives. It is also ...
Read More