I don’t know about you, but I have a “box of shame”. It’s where I keep all the photographic odds and ends of kit that I never use, but can’t bring myself to throw away. Well I’ve always felt it would come in handy one day, and it seems that day has come! This story really gets going when I decided I wanted to do something fun with my Konica Pop*, an 80’s classic point and click camera I picked up in a charity shop a few years ago.

By utilising some of these long-neglected items, I managed to rig up a powerful off-camera flash for my Pop. 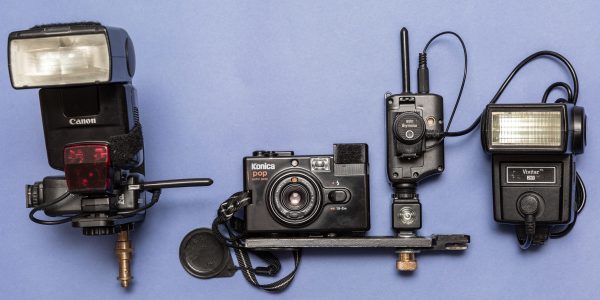 From this photo you should be able to work out what I did. In essence it works like this: The Konica Pop’s built-in flash triggers an optical slave which triggers a radio transmitter, which then triggers a radio receiver, which fires the bigger flash. See? Simple!

I’ve used whatever I had going spare, but most parts could be interchanged with whatever equivalents you happen to have. Some trial and error may be involved (eg I found more modern flashes don’t always respond to the triggers). To avoid over/under exposure, it’s helpful if your camera has adjustable apertures. The Pop’s ISO settings are in fact just different apertures, so it works well for this. Accordingly it’s helpful if you can adjust your flash output to match the chosen aperture, but I’ve also used a thyristor-controlled flash on occasion and that saves the need for a flash meter.

In terms of picture style I wanted to emphasise the role of the external flash, so I opted to shoot at night with slow film. Ilford FP4 Plus is the perfect choice for this, though to give the flash a little more reach I rated it at 200 iso and adjusted my development time accordingly. Also for the sake of emphasising the off-camera flash, you’ll see I’ve taped over the built-in flash. It still emits enough of a blip to trigger the optical slave, but doesn’t influence the look of the photo. 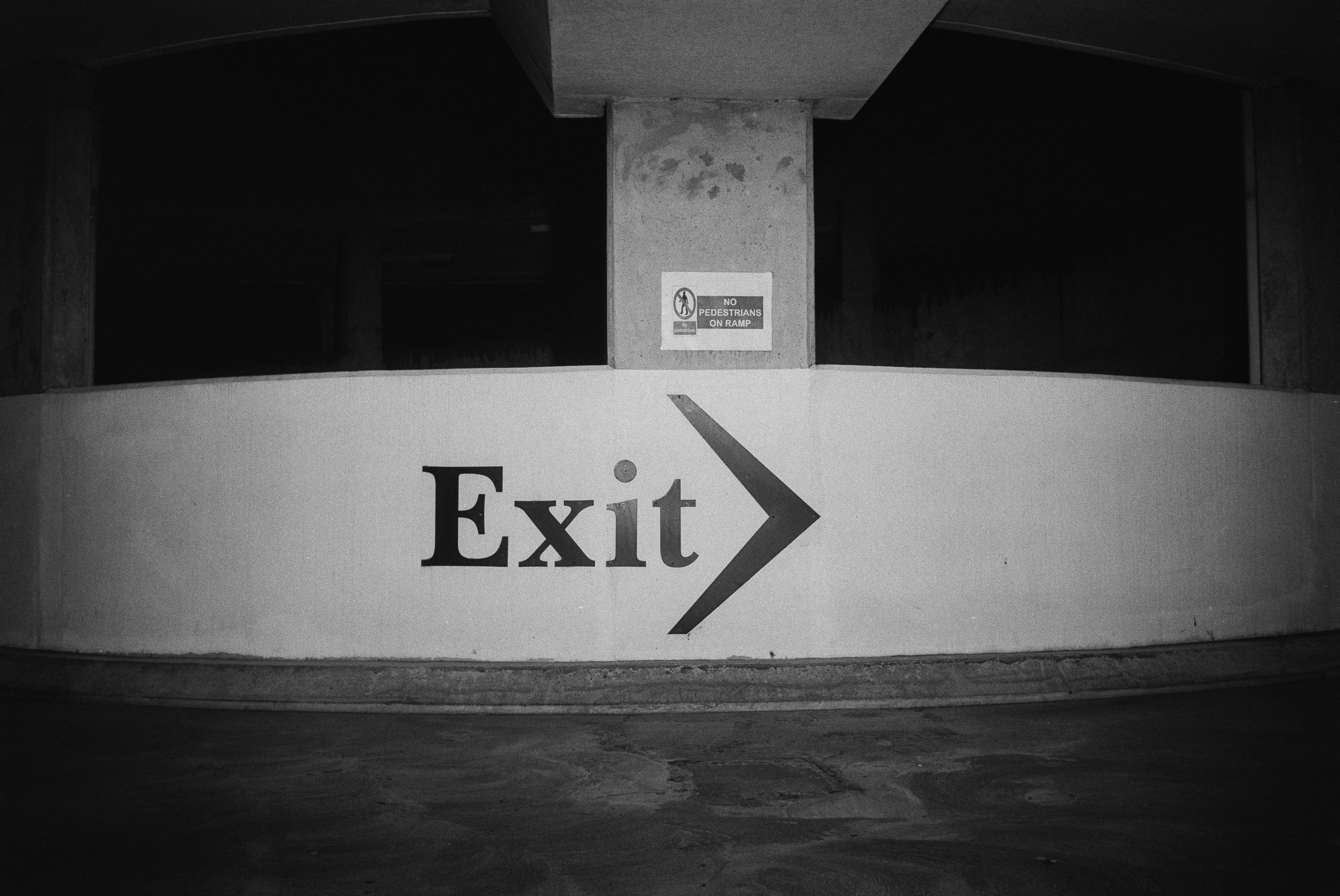 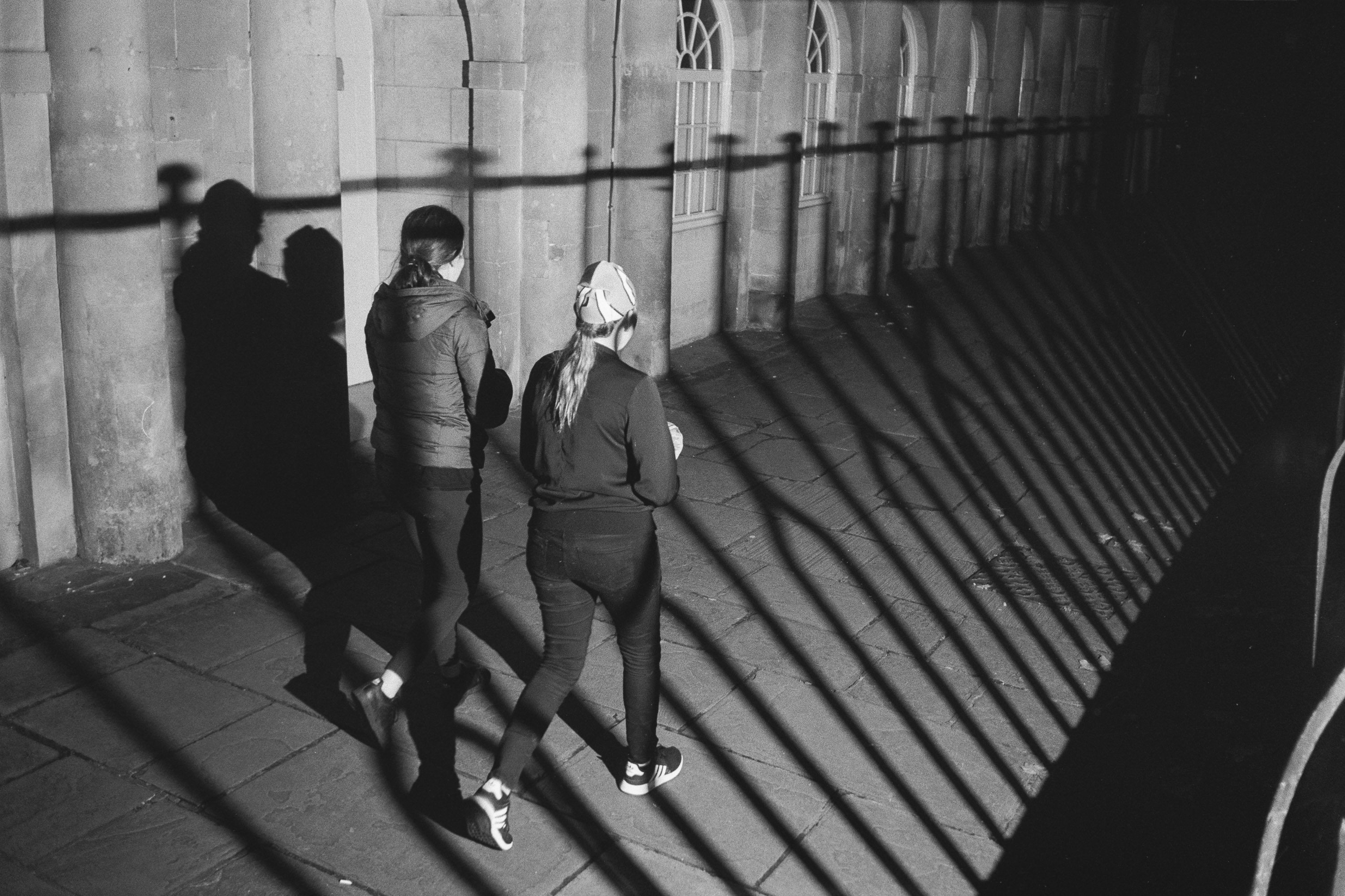 The first couple of outings with this rig were to Bristol and Bath, where I played with abstracts, street scenes and a street portrait. This showed the diversity of possibilities with this slightly quirky kit. 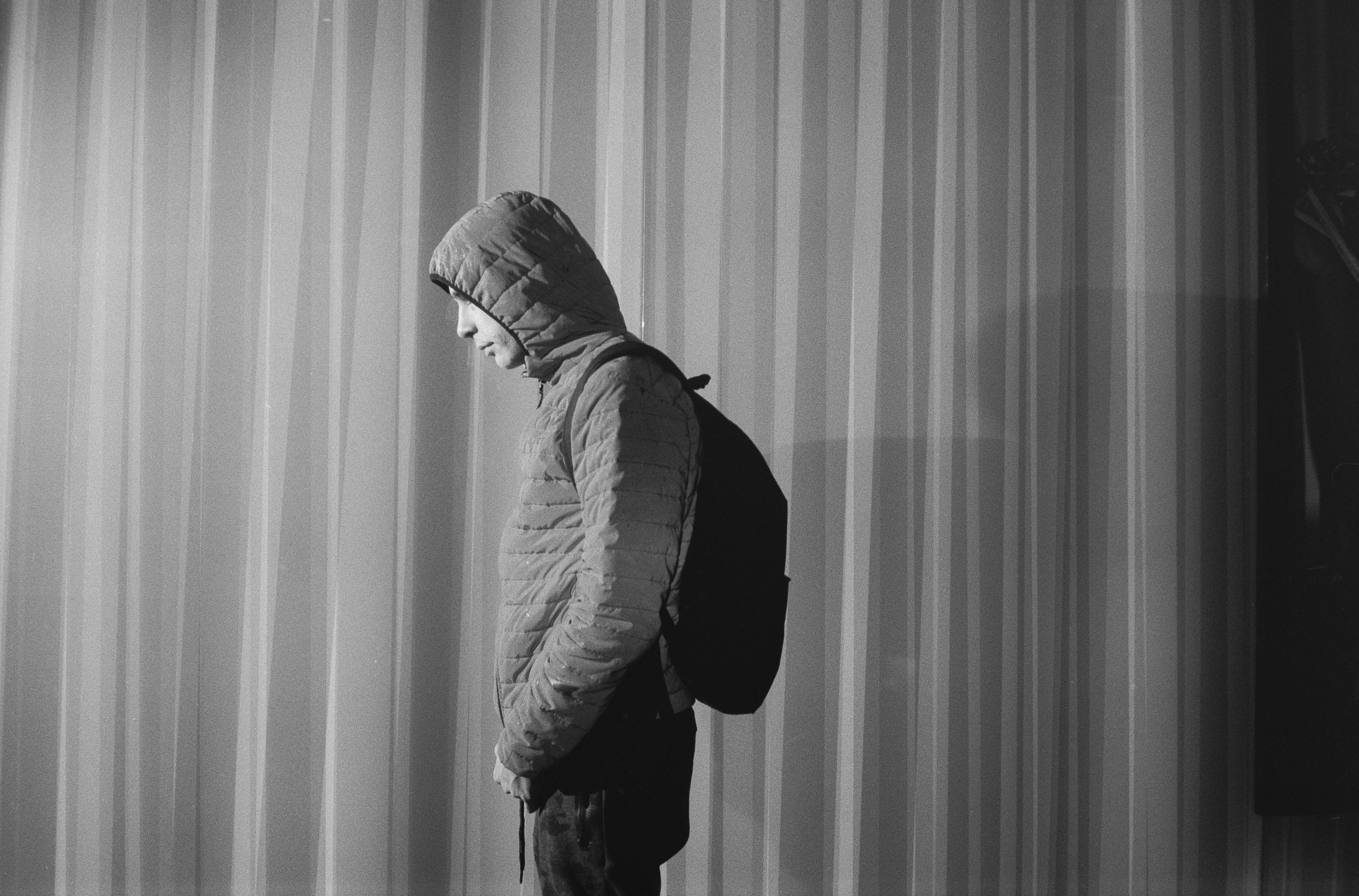 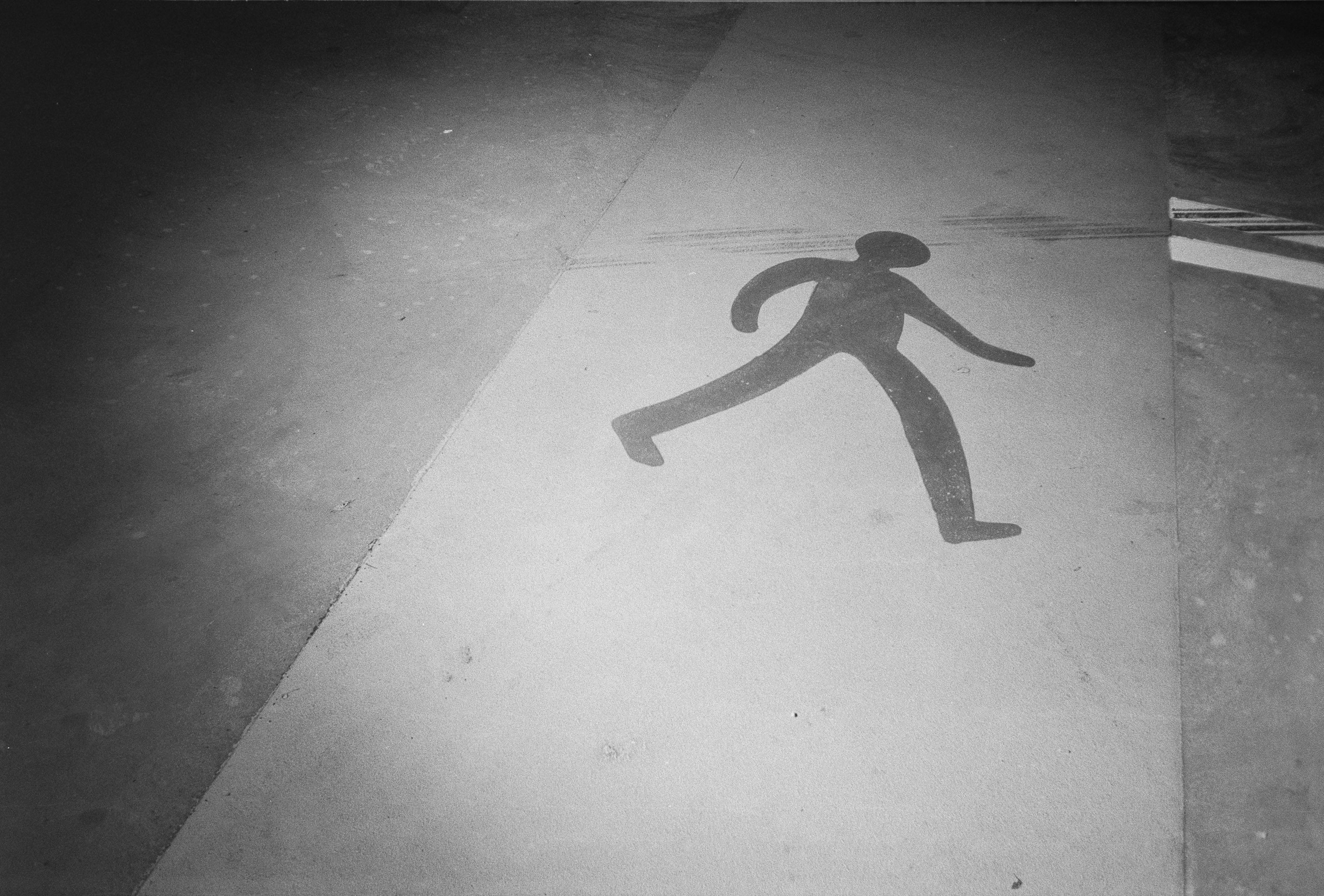 My next outing was on the night of Valentines Day when I captured these photos of Andy and Natalia on their first date. I saw Andy standing there, flowers held behind his back, checking his phone, nervously awaiting his date. I asked if he had a minute for a photo session for a blog article I had in mind and I think it took his mind off his nerves so he agreed to help.

Natalia arrived while I was setting up and she agreed to be in the photos too. It was their first date, a great ice-breaker for them and I think they made excellent models! So I shot them together, then re-created the scene of Andy waiting with his flowers, checking his phone just to complete the photo story. 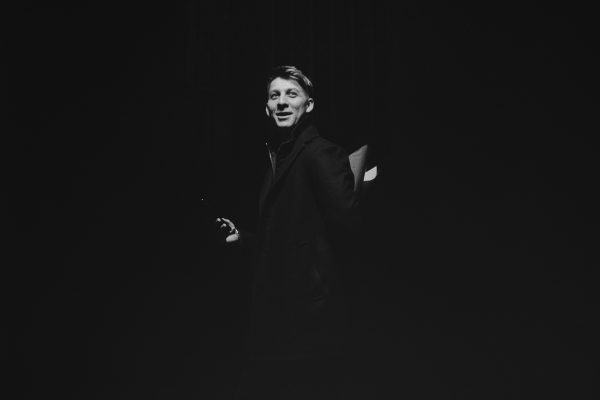 To achieve this wonderful cinematic light I engaged the help of an assistant, Nik, to steady a Manfrotto boom stand to get the flash directly above Andy and Nat for that streetlight look. 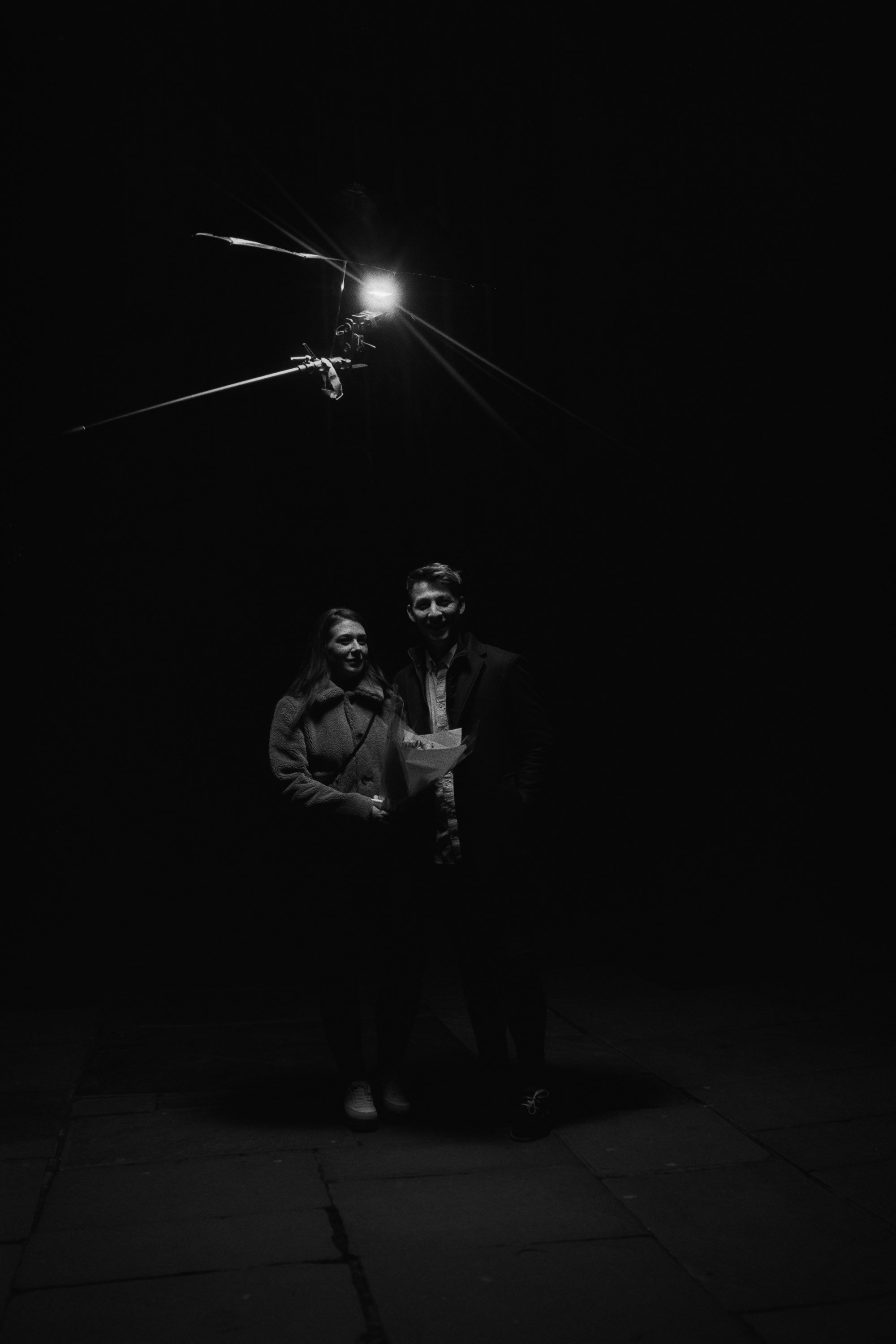 14/02/2019 Konica Pop flash test series taken in Bath on the evening of Valentines Day. Andy and Natalia pose under my flash which is supported on a Manfrotto boom stand. 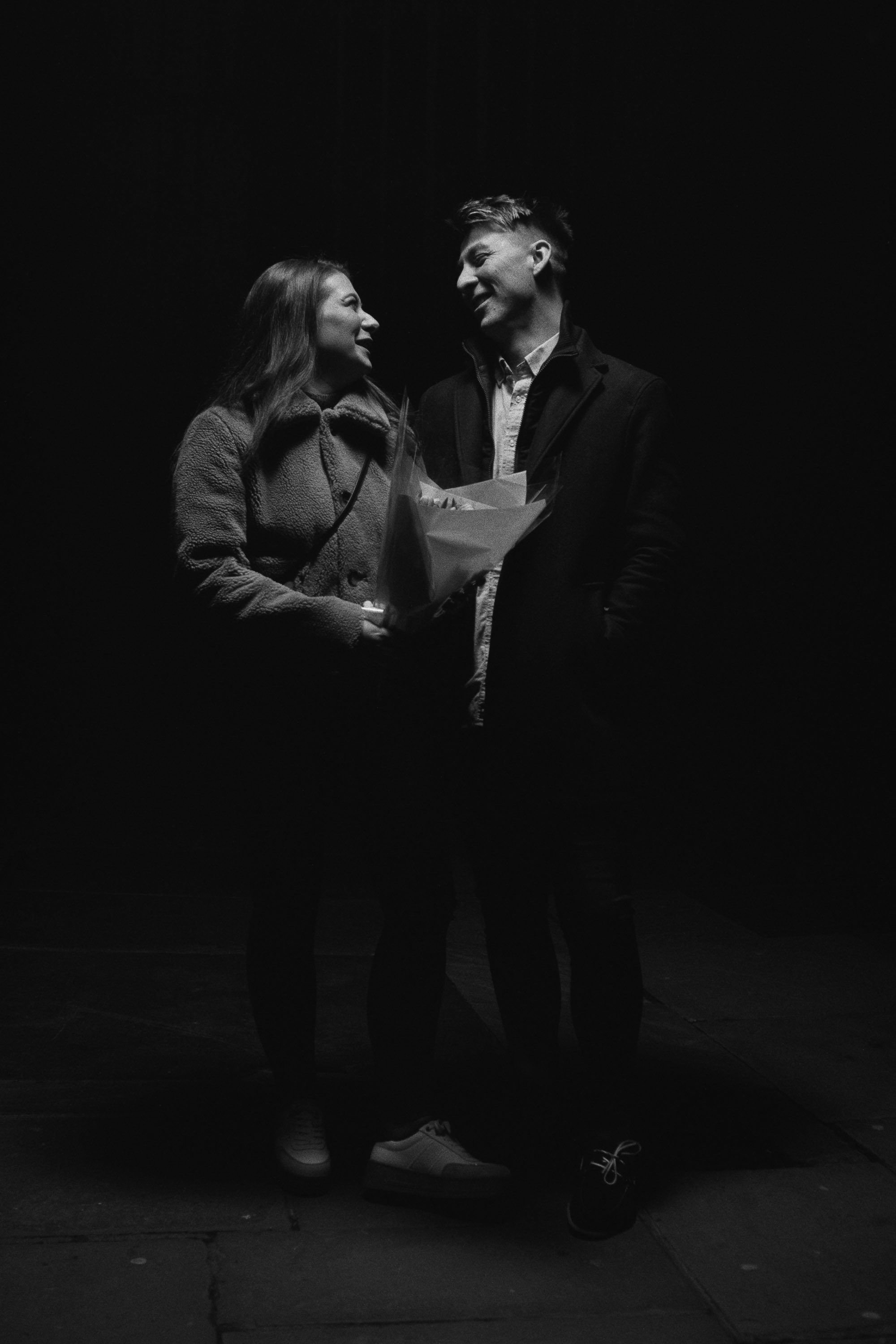 14/02/2019 Konica Pop flash test series taken in Bath on the evening of Valentines Day. Andy and Natalia posing together.

After I’d let them get on with their dinner date, Nik and I did a few more shots around the town centre just to play with silhouettes and textures (that’s Nik doing a star jump for me!). 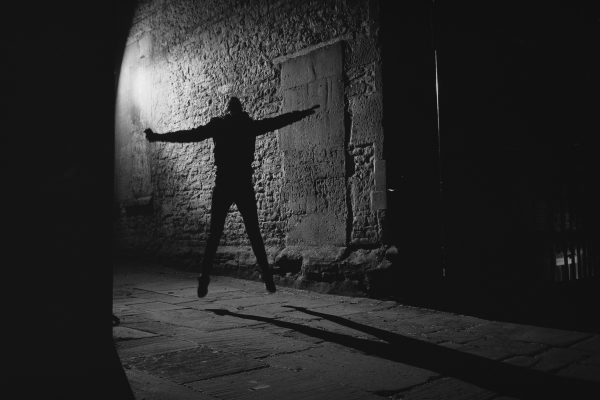 The thing with the Konica Pop is that the fixed lens is surprisingly sharp, but you do have to watch your distances. Get too close and subjects quickly go out of focus. Pull back too far and your subjects get too small and your flash set-up starts to creep into shot - half the fun is dealing with these challenges!

I’m going to keep experimenting with this idea, so if you happen to see a guy in the streets at night with a crazy camera and a glint in his eye, prepare for some un-planned modelling! 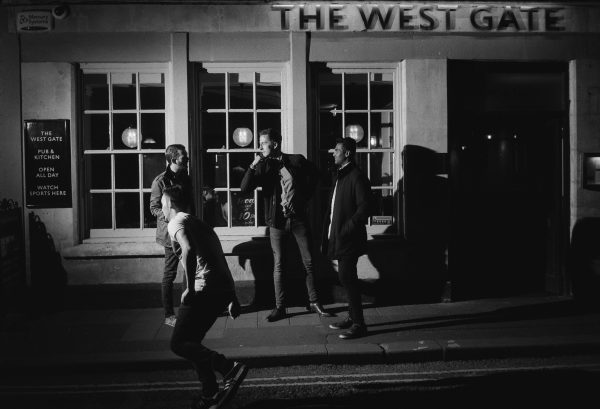 With thanks to Nik for her invaluable assistance: https://www.helloimnik.co.uk/) and Christian Bodden for his very useful info on the Konica Pop and its aperture settings http://saturatedimagery.co.uk/cameras/konica-pop/

*Here’s a helpful tip for if you buy a Konica Pop and discover the flash is dead. It’s just possible the capacitor has gone into hibernation through lack of use. To fix this, pop in a new set of batteries, turn the flash on and leave it over night. In the morning try the flash again (possibly requiring more new batteries) and you may find it magically works again.

I’ve been a professional photographer for the best part of 30 years, but sometimes I still act like a little kid when I get to messing with cameras. My main business is as a freelance corporate communications photographer, which means lots of business head shots and illustrative images for business brochures and websites as well as some editorial work. All my client work is shot on digital now, but my passion for film returned a few years ago and I’m starting to explore where this side of my practice might take me. For personal project work where I offer fine art prints for sale, check out https://www.takeagander.co.uk/ Or you can look up my corporate work at https://www.timgander.co.uk which mainly features my business photography, but also has some personal project galleries too. Be sure to check out my Saxonvale series which was all shot on expired film over a period of about two years. With additional material not shown on the site I hope to make a book of this work soon: https://www.timgander.co.uk/portfolio/saxonvale-what-happened-here/   I’m also on Instagram as https://www.instagram.com/takeagander and I’d love to see you there.