In 2018, we invited the global analogue film photography community to take part in our latest film users survey. The survey, which attracted 2100 participants when it was last conducted in 2014, grew to over 6,800 participants from 100 countries this time around.  This was largely due to the help received from the fantastic film community in sharing it far and wide on social media, blogs and forums, so thank you.

While many of the results are in line with the growth seen since the re-emergence of film photography, the survey has also shown some interesting findings which we have already put to good use having launched our SIMPLICITY range of film processing sachets as a direct response to the growing trend for home film processing. 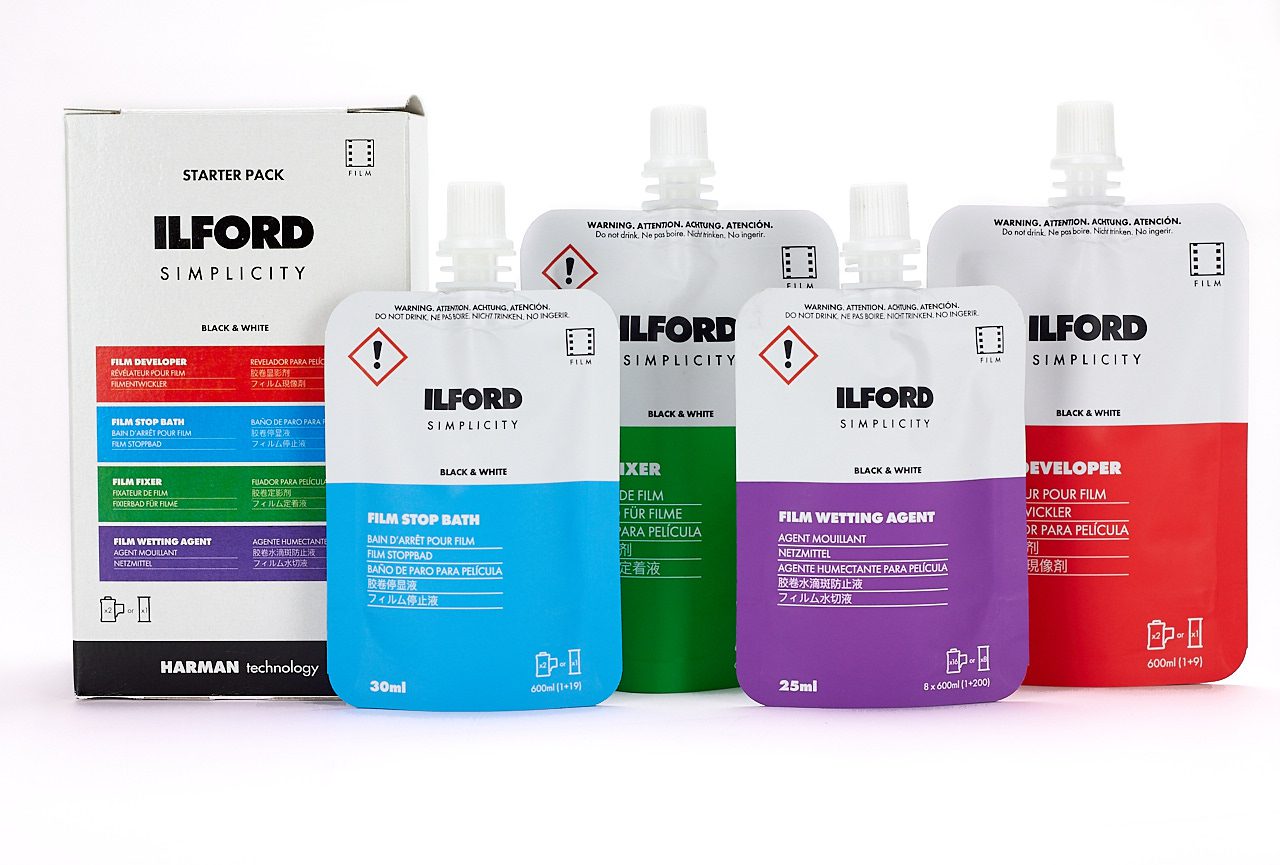 Read on to discover some of the highlights from 2018’s results:

Many new users or returning to film after an absence.

The resurgence and growth of film over the past 5 years, has seen 57% of our responders returning to or trying the medium for the first time. When breaking down the demographics, 37.1% of those under 44 were completely new to film with 27.1% returning after an absence. In the 45 and over range, only 3.6% were new to film, 41.9% were returning while 54.5% considered themselves as having always shot film. 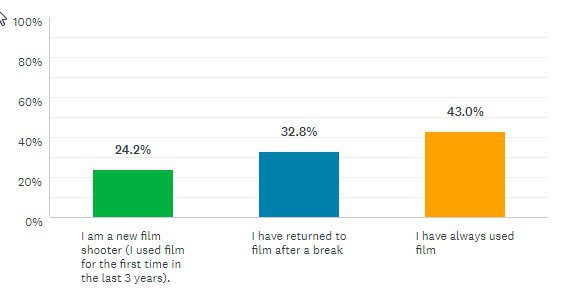 It turns out many film photographers are mixed medium shooters. While 23% of respondees only shot film, 41.3% shoot more film than digital versus 35.7% who are predominantly digital shooters who also shoot film. Surprisingly it was the younger age group (<44) who shot more film than digital, 68.4% compared to 58.3% of over 45’s.

135 remains the most popular format

Given the availability of 35mm film cameras as well as the ease of use, 135 is unsurprisingly the most popular format with 90.7% of respondents using it. However, 120 wasn’t far behind with 77.6% of responders shooting medium format. 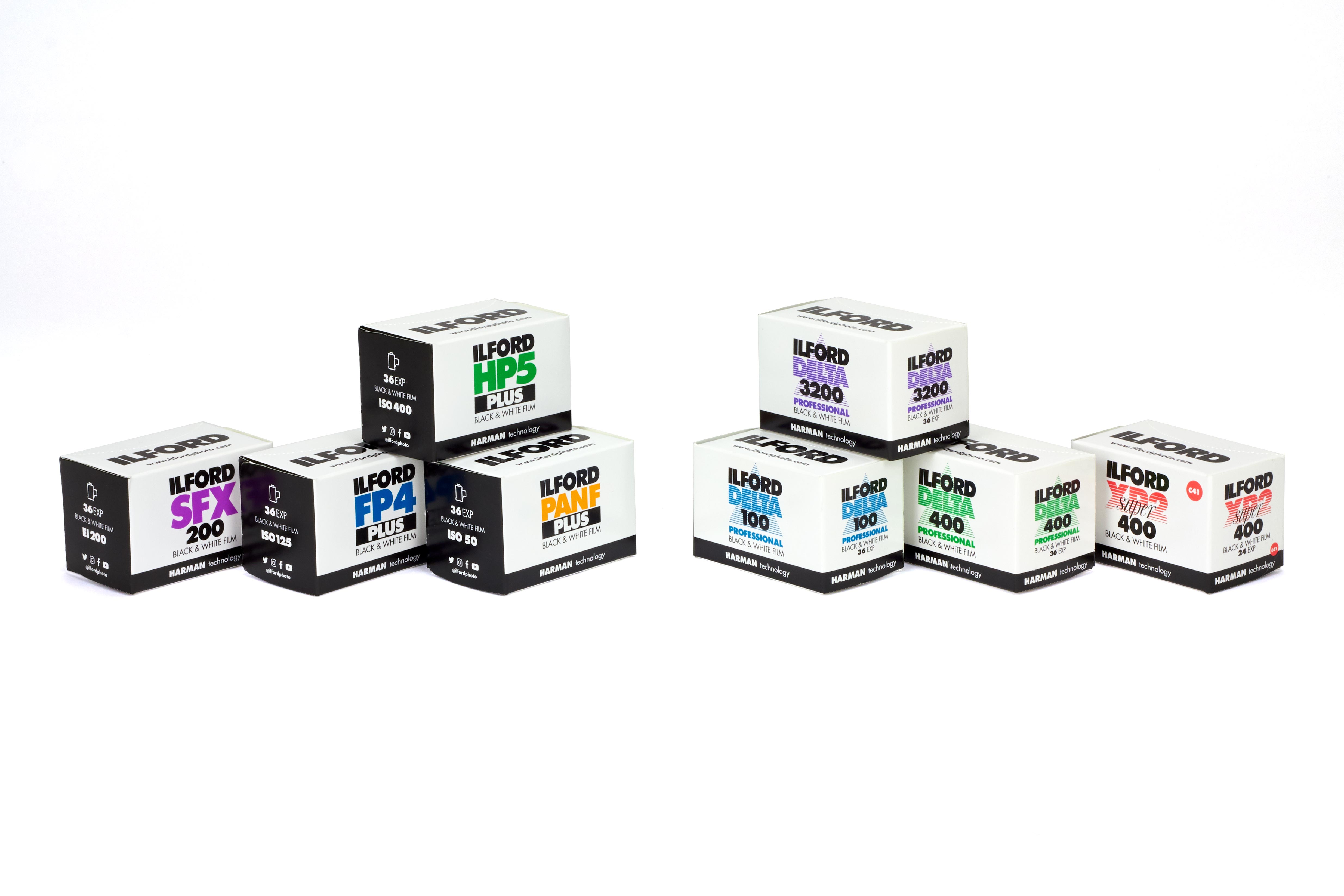 Most film users shoot both black & white AND colour

Despite being an ILFORD Photo survey, it was open to all film shooters regardless of what brand or film type they used. While 33% only shoot in black & white, most participants (64%) shoot both B&W and colour. The younger audience (<44) leaned towards colour with only 24.1% exclusively B&W and 72.1% shooting both, versus the 45> age range with 47.3% B&W only and 51.4% shooting both.

The appeal of film

With so much choice of formats available to photographers, we wanted to understand why people are returning or starting to shoot film. ‘The look’ or aesthetic edged the voting with 76% of people citing this however, what was also clear across all ages is that many people appreciate the creative control and process involved in shooting film almost as much as the look they get. 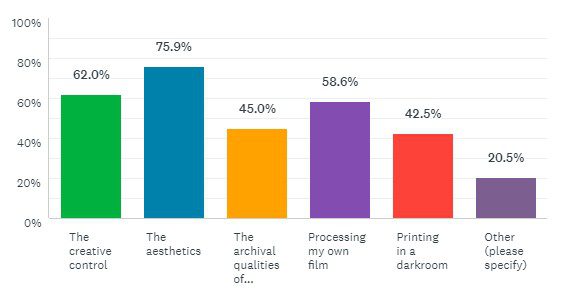 Despite 44% of responders preferring to shop online and 31% having no preference, the survey highlighted that there is a continued importance of bricks and mortar stores. 25% of people still prefer to buy in a store, which increased to 26.3% in the <44 age range - the value and knowledge of the staff likely adding value to those new to film. However, for 45> users they prefer online (48.2%) while only 21.6% used shops. (You can find you local dealer by using on dealer search tool).

76%* of responders have processed their own film but those that hadn’t cited lack of knowledge (9.7%) and lack of equipment (34.9%) amongst the main reasons why. Despite 12.9% stating they would always use a lab, 10.4% would be willing to process their own film if they shot more. The type of film also impacted the responses with colour negative and slide film less commonly processed outside of a lab compared to black & white.

Similarly, photographers’ workflows are evolving with more choosing to digitise and share their images online rather than print them in a darkroom. 50% of responders* had printed in a darkroom although 54% don’t currently have access to one. However, of those with no access, 81% would print if they did.

While the survey did not generate any major surprises or revelations, much of the data reaffirmed our own thoughts and views on the current market and gave us the opportunity to evaluate how we can continue to support the growing numbers of users as well as address the gaps or obstacles that could impact people’s continued learning and enjoyment.

It is a privilege to see the passion and enthusiasm with which photographers and the wider community view film. With so much choice available for photographers, film offers an opportunity to learn and experience photography in a tangible, creative and fun way. Whether shooting 135, 120 or large format, black & white or colour, what this survey has reiterated is that the appeal of film is enduring and will continue to grow as more and more people (re)discover it.

We would like to thank everyone that took their time to share their views as well as the global film community for sharing the survey with their audiences.

The Results of our Film Survey are in

30th January 2015 The results are in from the ILFORD PHOTO film survey and they are positive. At the end of 20...
Read More