Tariq Tarey give us the lowdown on how he captured this striking portrait. 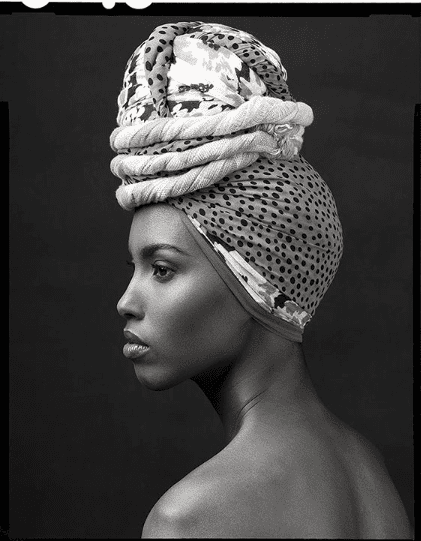 This image is part of long term project. The project highlights the relationship between African & African Americans women and their scarves.  Hopefully a book and an exhibit will be announced soon.

Fortunately, I have not encountered any challenges.

What process did you use (Tripod? Set exposure time? Filters?)

I use a Jobo ATL1000. I develop with HC110, Ilford Ilfostop and Ilford Rapid Fix.

I normally scan my negatives with Epson V700 and I use my Eposn SC P9000 for printing.

You can find out more about Tariq's as well as links to his website and social channels in the About section below.

If you would like to contribute to a future post in this series, then please get in touch.

Tariq Tarey is a documentary photographer, skilled in both still photography and video, who specializes in refugee affairs. In July of 2006, Tariq’s show, Forlorn in Ohio, which documented the plight of Somali refugees, appeared at the Kiaca Gallery in Columbus. Forlorn in Ohio also traveled to Wright State University, in 2007. Several images from that show are now part of the permanent collection of the Columbus Museum of Art. In recognition to the power of his work to call attention to the plight of refugees, Tariq was honored with the South Side Settlement House’s prestigious Arts Freedom Award in 2006. In that year, he also won the Ohio Art Council’s Individual Artist Award. In 2008, Tariq was given the Individual Artist Award by the Greater Columbus Arts Council. He directed the documentary, “Emergency Living: Somalia in the Aftermath of Famine.” Tariq also directed “Women, War and Resettlement: Nasro’s Journey,” which was aired on WOSU Public Television in 2012. In 2014, Tariq’s film, “The Darien Gap,” was shown in the 2 nd United States Conference on African Immigrant and Refugee Health. In 2015, Tariq’s photo spread appeared in the Magazine, 614, in an article entitled, “Journeys of the Diaspora.” In 2015, Tariq also did a photo spread for a publication entitled, Impact of Refugees in Central Ohio. In 2017, along with writer Doug Rutledge, Tariq Tarey had a photographic exhibition of 30 Bhutanese-Nepali refugees residing in Columbus, OH. Currently, he is working on a book project, documenting representative refugee populations, who have made their home in Central Ohio.

Familiar Places It's interesting to look with new eyes those places you're familiar with or have been before, ...
Read More

We were really looking forward to seeing some of the faces behind the people that we chat to on social media w...
Read More