Peter Schön has shot many beautiful ski, snow and mountain images (among others) on black and white film. Here he shares his story behind 'Chatyn-Tau, Caucasus' in the second post in our 'How I got this picture' series. 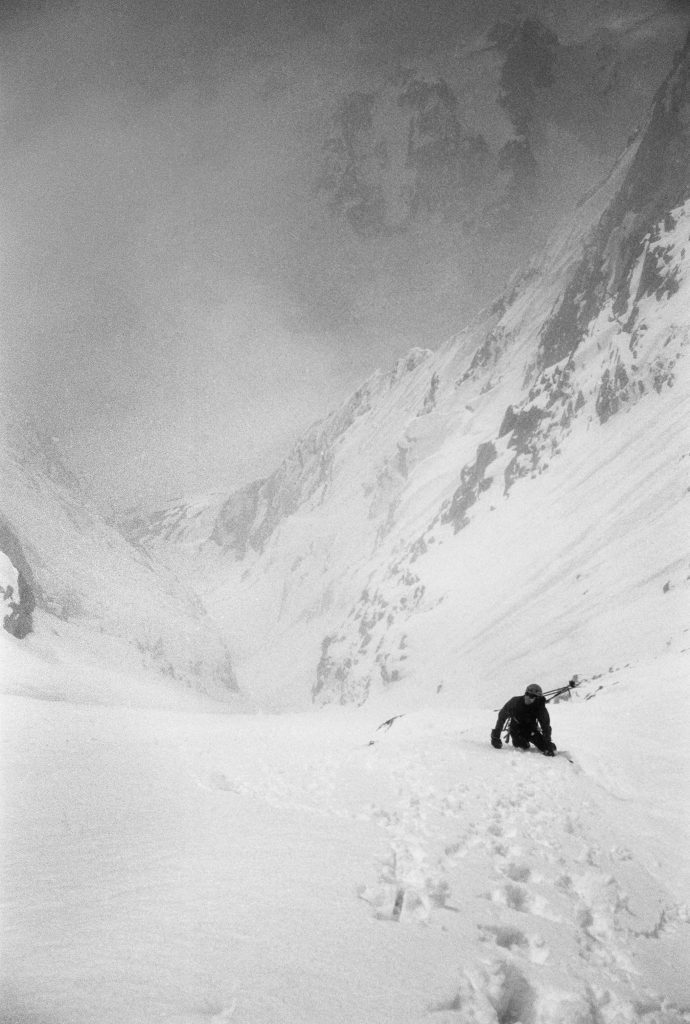 For years, I had been climbing and skiing in the Caucasus mountains of Georgia, with several first ski descents (Georgia is a deeply fascinating country, and now my second home). During one of the trips I saw the immense, 1900m high, SE couloir of Chatyn-Tau West (4310m), that had never been skied before.
In the image Trevor Hunt is ascending this line, prior to making the first ski descent. For such situations, I still use film, as it often brings a depths and scale to the image. It is so difficult to convey in an image what we see and feel on such ascents and ski descents.

The process of taking an image when climbing a steep route (the route is 50-60 degrees steep) is always challenging. It requires motivation to do so, taking your hand off the grip of your ice tools (axes), moving your body into a position that may compromise stability and safety. Here a small but powerful camera like the Contax T3 is invaluable.

What process did you use ?

I developed the film in Paterson FX-39 and scanned with a Nikon Coolscan LS-8000ED.

I did not get around printing this image myself, but it was printed in the Ski Journal 10/2.

My passion for photography started in the mountains. I am an avid ski mountaineer, with several ski descents of 5000 – 7000m peaks, among them some first descents, in the Andes, Pamir, Tien Shan and South Caucasus. In the recent years, capturing the aura of the mountains and our sport through photography became goal of each journey.

While I started with mountain photography, I also work in the fields of documentary and reportage. This includes work about refugees and displaced persons in the South Caucasus.
I like to work with the concept of photo stories, with one to three strong images and a short, strong text.
My work has been published in magazines such as Black and White Magazine, Alpinist or Backcountry.

I focus on black & white photography and have stayed fond of black and white film. For absolute highest quality, I develop b/w film myself and have selected images scanned with Hasselblad Flextight X1.

I live in Narvik (Norway) and in Tbilisi (Georgia), where I work as avalanche technician/researcher and ski guide. Both areas give me tremendous opportunities to pursue my love for photography.

You can find more of Peter’s great images and find out more about him by following the links below.