Printed on: ILFORD Multigrade fiber base

Tell us the story behind this beautiful image

Long before I became a photographer, the redwood forests of California left me in awe. The enormous size of the trees - and their feeling of eternity - captured my soul.

Photographing deep in the forest requires even light. If the sun is shining, shadows and highlights create too much contrast. In order to have even lighting in the redwoods, we woke before dawn and drove to the forest. I set up my camera before the sun came up  over the horizon. There wasn’t much light, so a long exposure was necessary. Any breeze could cause movement and spoil the exposure.

As I adjusted my camera toward the scene, I noticed a branch hanging into the frame of the photograph. It didn’t fit the composition. To keep the branch out of the photograph, I asked Niki who was standing next to a redwood, to grab the branch and hold the branch against the tree. It took me an hour and several 10 minute exposures before I captured an image with no movement.

The whole time, Niki kept holding the branch against the redwood tree - hugging the tree. When my photography was done she said that hugging a tree for that long connected her with a living being. It was one of the most spiritual experiences she has had in the forest. Everyone should try it! 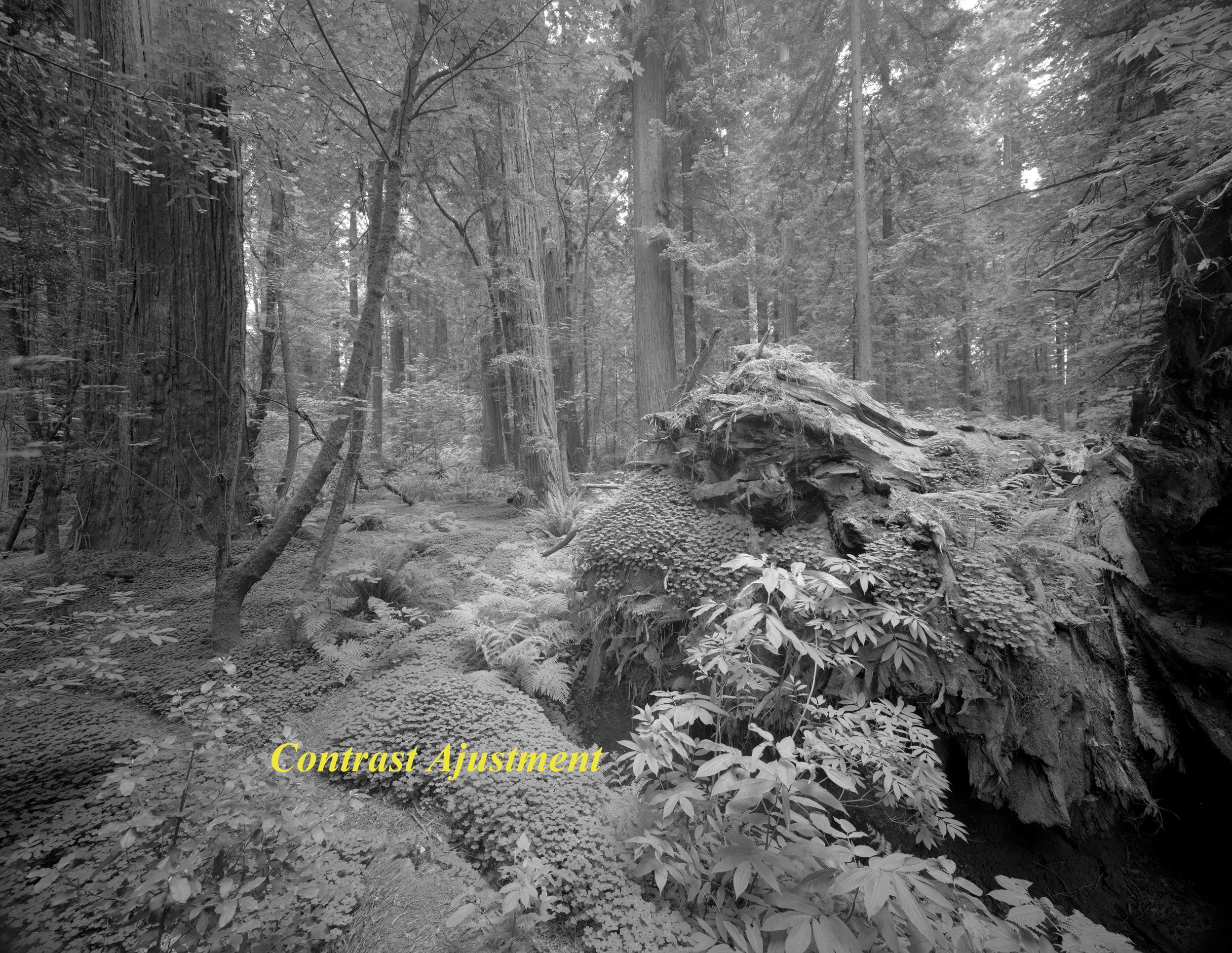 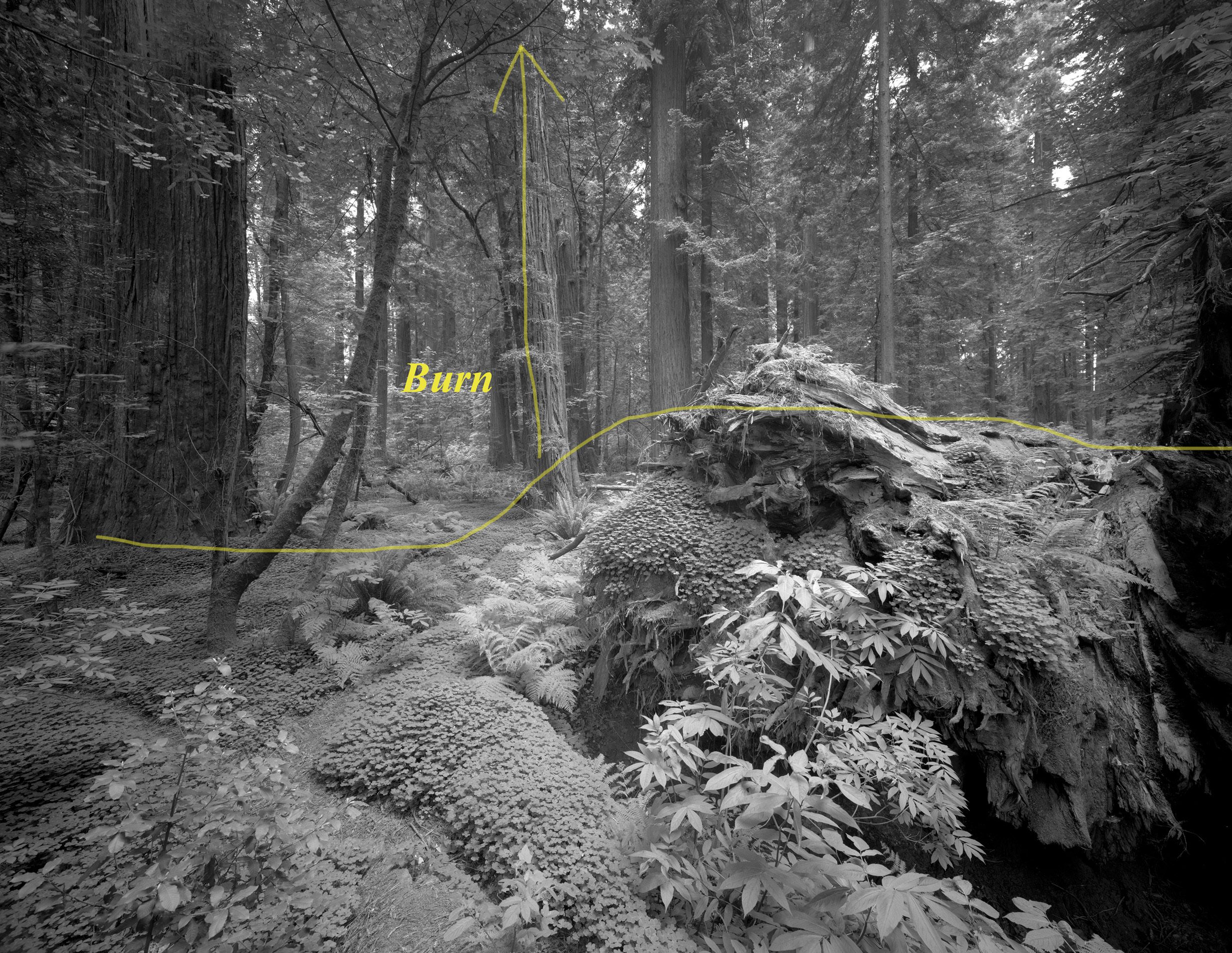 Step 3 Burn the trees in the back ground

Your can see more of Clyde's beautiful image on his website

Born in Kansas City, Missouri on September 6, 1942, Clyde was the only child of Clyde and Edna Butcher. His father was a sheet metal worker and traveled around the country working various jobs for the government. In 1956 the family moved to California where they settled in Beaumont, a high desert town in Southern California.

After high school Clyde went to college at California Polytechnic in San Luis Obsipo. He married Niki Vogel in 1963 and graduated in architecture in 1964.

After graduation he and Peter Portugal created their first business together photographing architectural models for architects. After two years they realized that even though their photographs helped architects sell their ideas, most architects couldn’t afford the time it took to accomplish the images. (Today, using the tools of a computer, it would be quick!) The business stopped. Peter and Clyde, remaining friends, went their separate ways.

Clyde worked in the architectural office of William Pereira in San Francisco, and then in William Pereira’s Los Angeles office. In 1967 his daughter, Jackie was born followed by his son, Ted, in 1969.

In 1969, after a down-turn in the economy, Clyde lost his job and turned to his skill as a photographer to make a living. He took his work to street art festivals for two years and then joined with Peter Gates and Richard Pucillo to form a business selling Clyde and Richards color photography as wall décor. To make the photographs “useful” Clyde silk-screened a clock face onto the front and then inserted a battery clock on the back, making “picture clocks”. The business was the largest importer of battery clocks in the United States. It had 200 employees, a manufacturing plant in Anaheim, California and Akron, Ohio. It produced picture clocks for Penny’s, Montgomery Ward, Sears, and many other large stores, also selling the clocks over seas and in Mexico.

To escape the pressure of the business, Clyde and his family moved aboard a sailboat where they enjoyed nature, the water and raised their family.

In 1977 the picture clock business was sold.

Clyde built another boat, put it on a trailer and took it across the country to sail around Florida. He and his family fell in love with Florida and moved there in 1980.

In 1981 Clyde began, once again, taking his color landscape photographs to the street art festivals around the country.

In 1986 Clyde’s son, Ted, was killed by a drunk driver. Clyde stopped photographing in color and returned to black and white photography.