In the summer of 2017 my friends, novice climbers, asked me to climb Elbrus with them. This is the highest mountain peak in Russia and Europe. The idea sounded great, especially because I have loved mountains since my childhood. But my campaign plan immediately included a large-format camera, with which I have been travelling for many years (mostly, of course, by car with a camera in the trunk).

For a while I wondered if I should take a big camera with me too. Would it be better to take a Hasselblad? But soon I made the final decision that if I go there at all, then I definitely need to take a 13x18cm camera with me.

In one huge backpack I had all my hiking things, including tents, sleeping bags, clothes and food for climbing. In the other — a camera, 4 film-holders, a loupe for focusing, a dark cloth, a light meter, colour filters, a tripod, 2 lenses, 2 boxes of Ilford FP4 Plus film 25 sheets each, light-tight tent for reloading film, cable release, cleaning products, and other accessories. Additionally, I took with me a 35mm-film camera Leica with one lens for taking photographs of my friends. Both backpacks seemed overwhelming. But enthusiasm was more than enough. 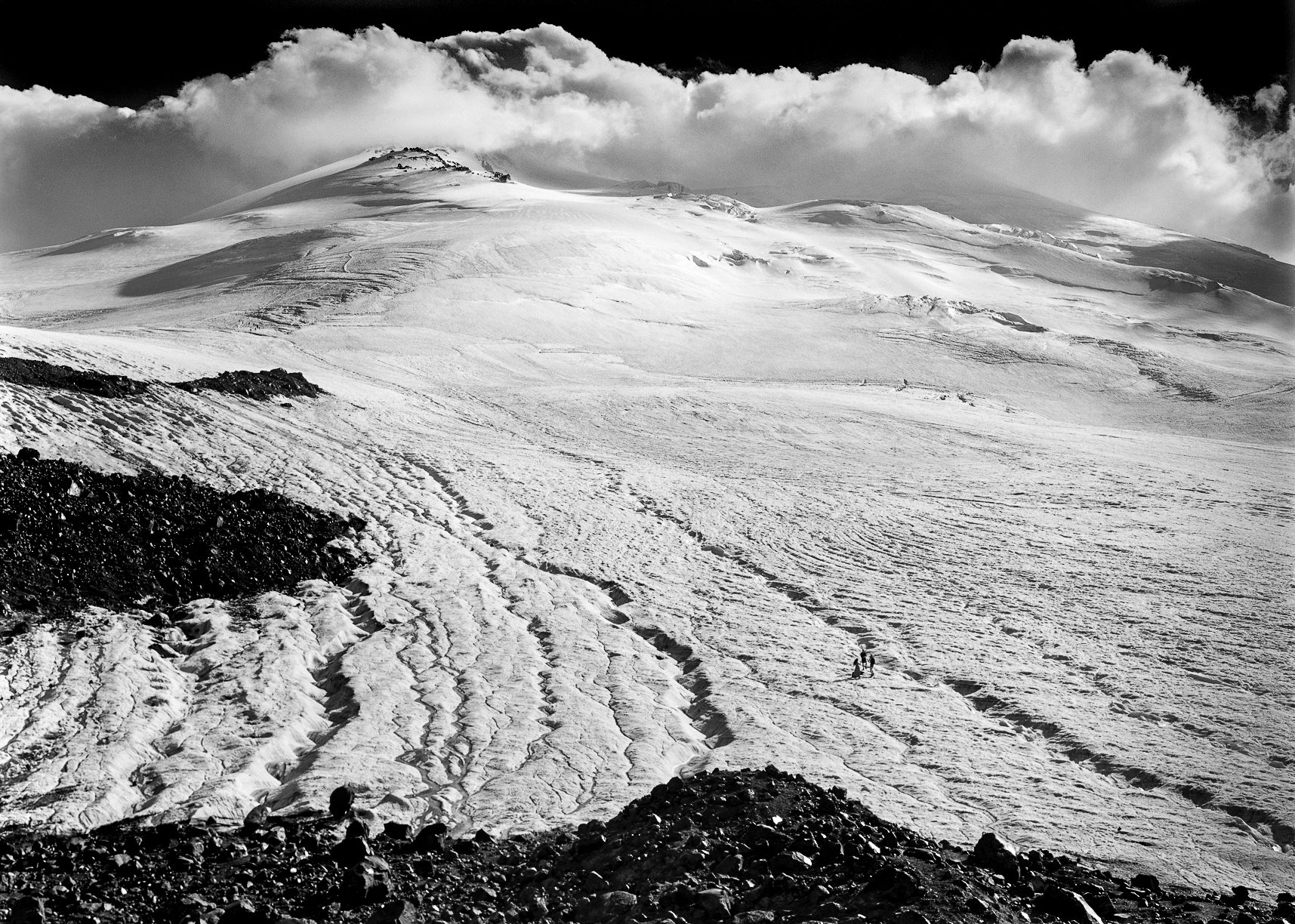 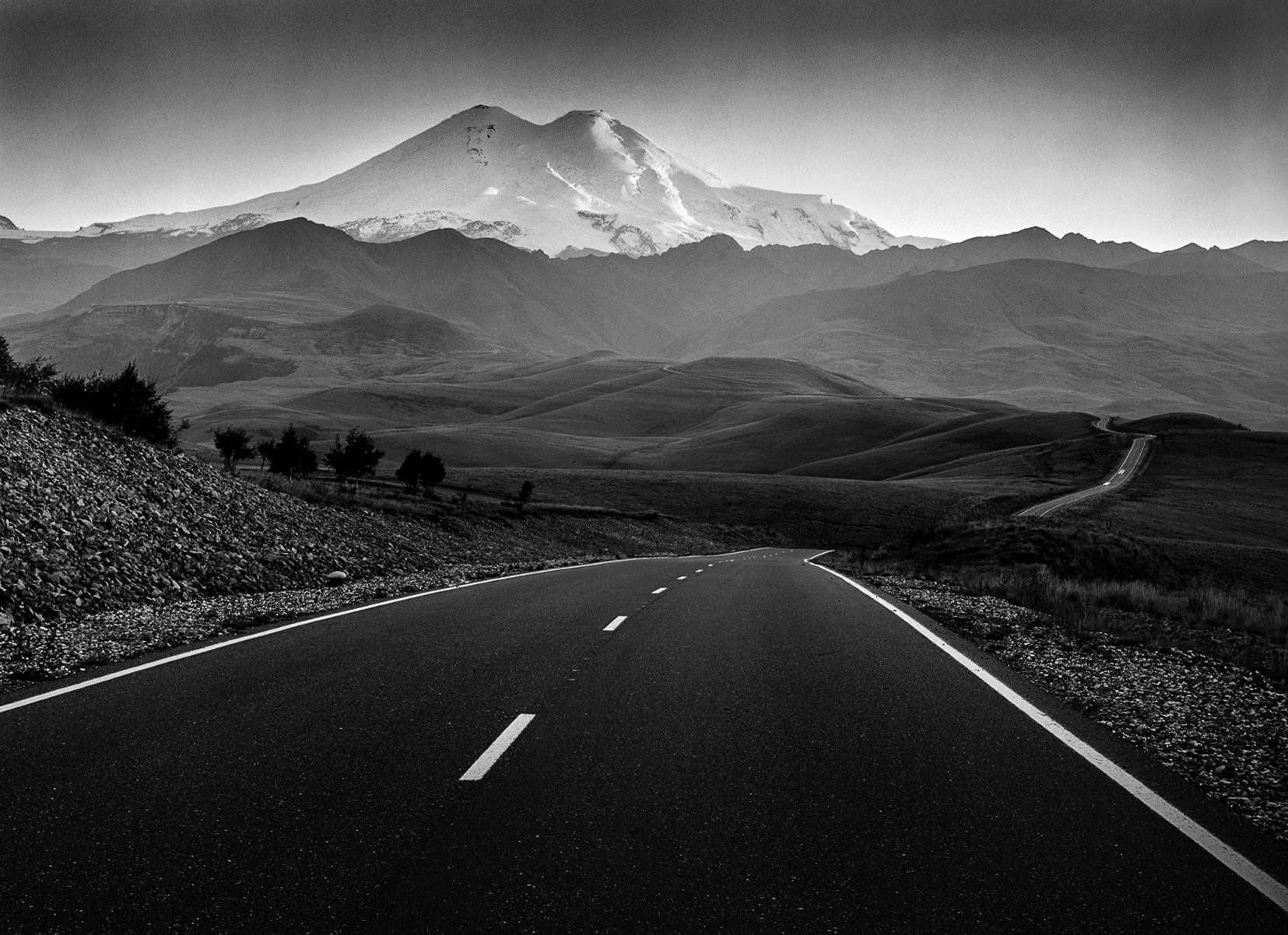 Usually the ascend, due to acclimatisation, takes place step by step. We transported all of our equipment to the lower base camp, setting up tents. Every day to acclimatise ourselves we made the ascend, with a small backpacks, a thermoses and snacks for the day. We then returned to the base camp to sleep.

Every day I took a large format camera with me, and tried to make at least a few shots. This was very difficult. Not only did I have to think about the exposure, filters, depth of field and so on, I also had to think about how to take every next step. On this basis, my experience made me realise that in such extreme conditions it was necessary to simplify everything as much as possible. In the mountains, everything works differently. It is inconvenient to work with gloves and mittens, but hands freeze without them. Because of the altitude, everything slows down — both breathing and thoughts. 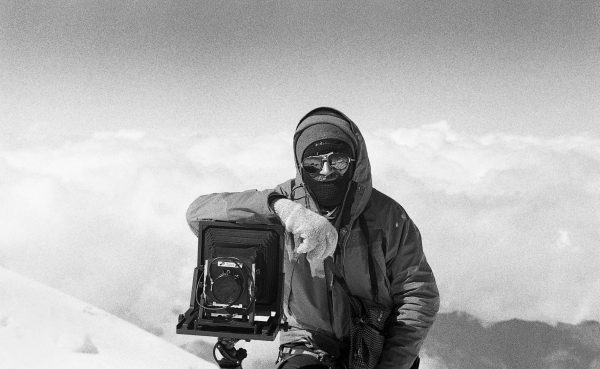 Ideally, I only needed one lens, one filter on it, a simple spot meter which has only one button (for example the Pentax Digital Spotmeter). But since this was my first experience, I took equipment that was ideal for urban environment, not for such extreme conditions. Of course, in the future I factored all of these experiences.

From all of my photo equipment, I had with me a Harrison tent — silver outside, black and light-proof inside, with sleeves for reloading sheet film. When I had shot the film, I would pull out 13x18 cm sheets from the film-holders and lay them out in different “EXPOSED” boxes. These would later be developed according to the Ansel Adams' zone system. 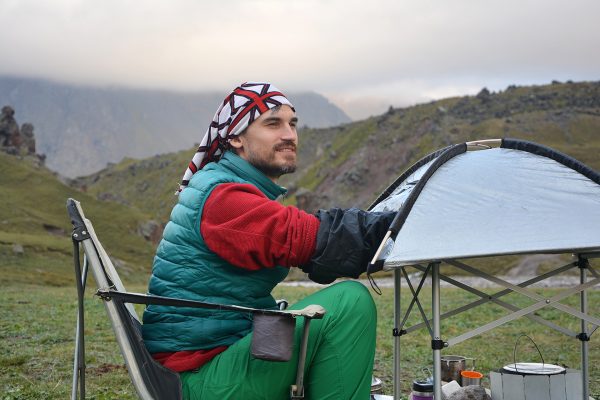 Then I needed to turn the dark slides to their original position and blow them with a spray bulb for dust. I would then load 8 new sheets of Ilford FP4 Plus 13x18 cm on the day of the ascent. At home, all this takes about 15 minutes. In the mountains, I spent about an hour and a half doing this. All the time I was rechecking, that I had not let light into the tent until the entire film was in light proof boxes. 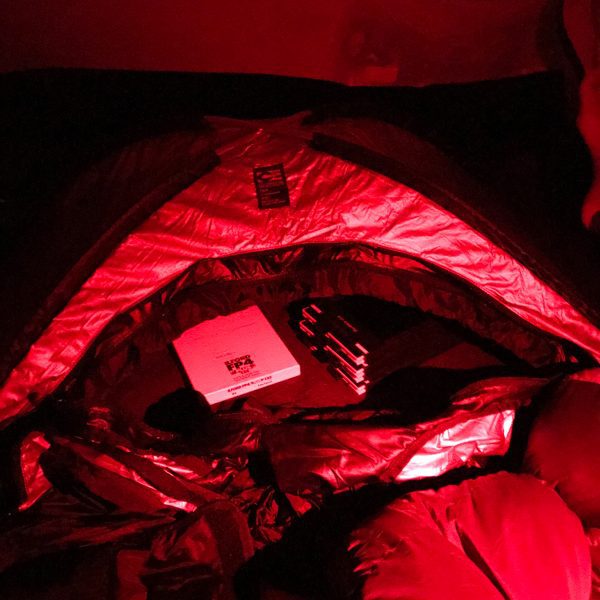 Reloading in Tent - Base Camp

The assault on the summit began in the morning from the altitude of 4200m to the elevation of 5642m. We had to cover this distance before noon, to give us enough time to get back down before evening. Almost immediately a strong wind began, its gusts reached 100 km/h and the temperature of minus 10℃ felt like minus 30℃. Strength quickly ran out, there was no place to rest and drink hot tea with chocolate. 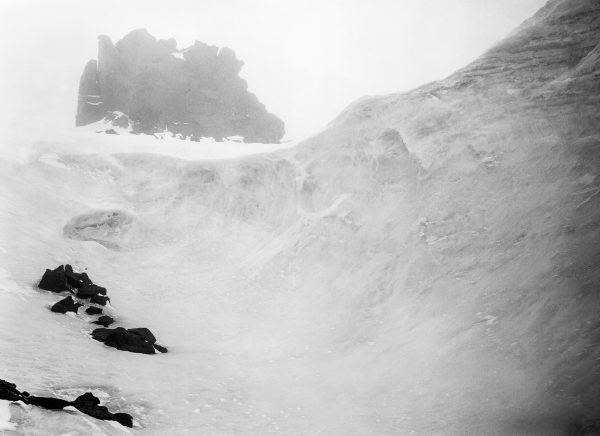 At an altitude of 5300m on the saddle between two peaks, there was a serious question about turning back and going down. Fortunately, we found a refuge, once dropped from a helicopter in case of stormy weather. Having warmed up in it with hot tea and replacing the insoles in shoes with warm ones, we decided to continue the journey. I left a backpack with a large-format camera and took with me only the Leica camera and the flag of the Art of Foto Gallery. 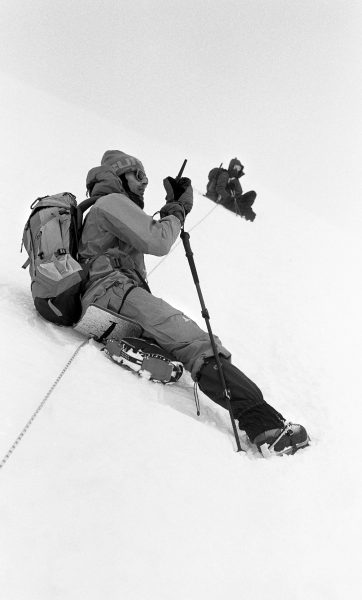 Three hours later, we were happy at the summit of Elbrus, and didn’t believe that everything worked out. The storm and blizzard began, visibility was very low. We had to urgently go down. On this day, no one ever climbed to the summit after us. The Emergencies Ministry forbade climbing because of the high danger of being lost in a blizzard and freezing.

Returning to Petersburg, I began to develop films, print photographs, and plan a new ascent to Elbrus. This time from the north to the eastern summit — 5621m.

The first thing that unpleasantly surprised me in the developed sheet negatives is the ultraviolet, of which there are so many in the mountains. This veiled a lot of good shots, making them almost unsuitable for darkroom printing. 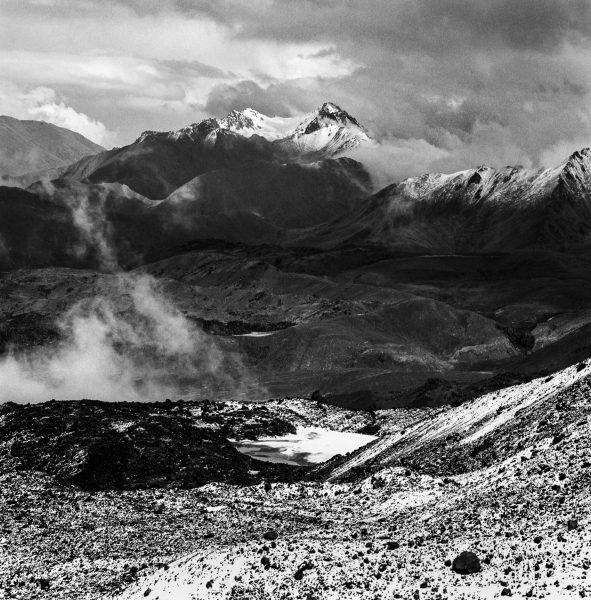 The second thing that pleasantly surprised me was the 35mm Pan50 and Delta400 films and the amazing state and atmosphere of the pictures. They looked timeless. Against the backdrop of the majestic and grandiose mountains, people stood in sunglasses with ice axes. If there weren’t the names of some modern brands on the equipment, one would have thought that this photo was from the 60s or 70s, and among these climbers could be my parents, but not my thirty-year-olds friends. At that moment it dawned on me — this is a story about people, but not about mountains. Initially, I was going to shoot the greatness of the mountains, but now, going to the second expedition, I already knew that along with the landscapes, I would take a portraits — stories about people. 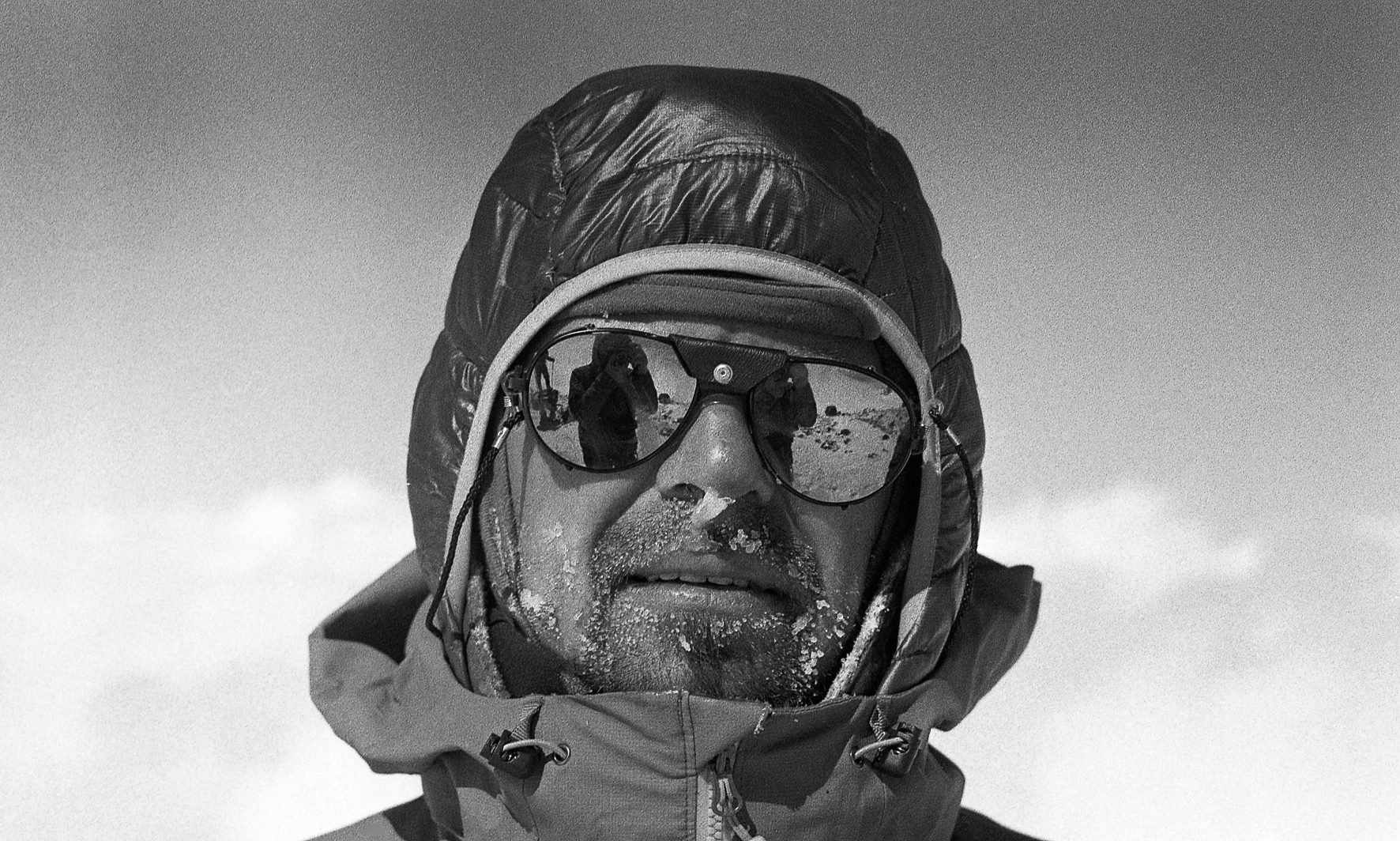 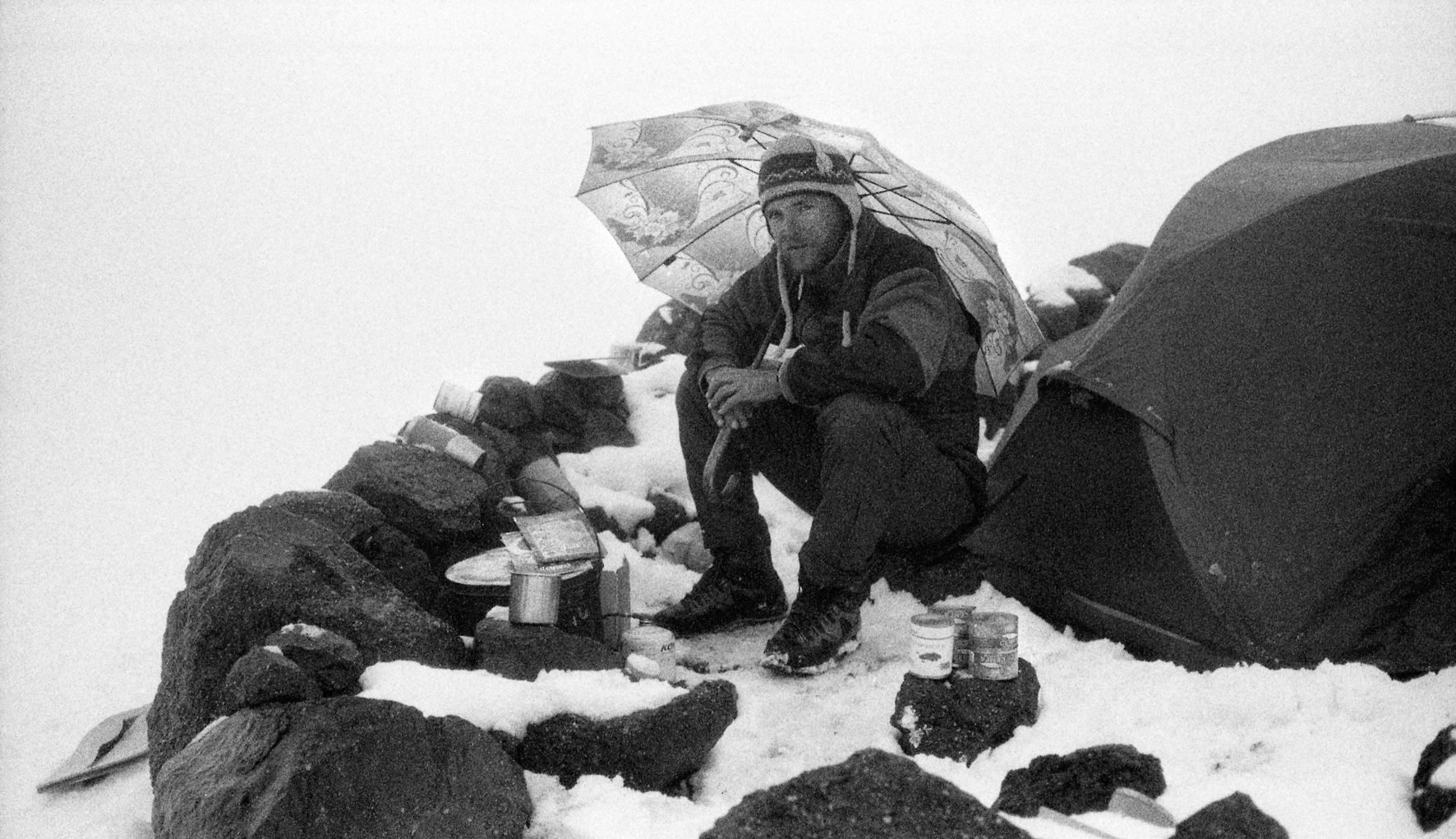 For the next climb, I decided to change the equipment and make it lighter. I replaced the photo backpack with a modern one — the Dyneema. It weighs only 600 grams and does not need an anti-rain cover. I removed the central column from the tripod — minus 500g. I changed the design of the Walker Titan XL camera — it became more compact when folded — the weight was still minus 500 grams. Then I have changed all the climbing equipment, including a tent, a down sleeping bag, and even replaced a tea cup with titanium.

The camera had only one 210mm lens and an orange filter, and I also took a red filter with me. For Leica, I took a 28mm wide-angle lens to take portraits of friends at base camp and in a tent. Despite the fact that the weight of the backpack was still about 15 kg, it turned out to be lighter and more ergonomic. 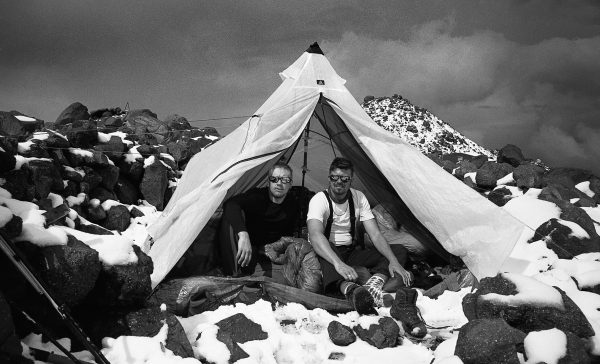 The ascent from the North of Elbrus lasts longer, as there is no developed infrastructure for climbers. During the climbing we enjoyed the untouched nature of the mountains. I watched the changing landscapes and the people. I saw how their inner feelings would change, anticipating the danger of the elements of nature, with which they can not fight. 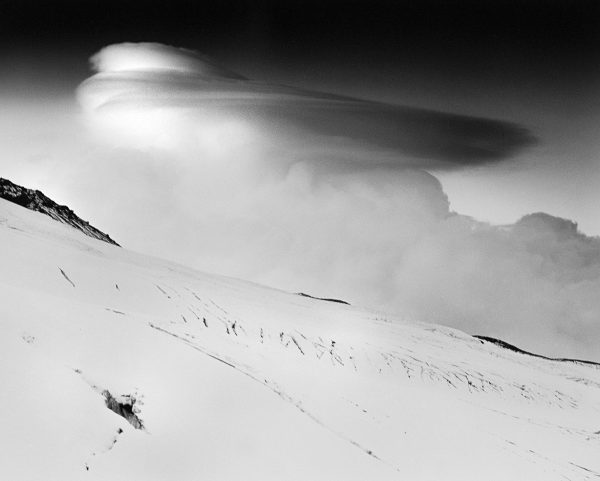 I took a photographs every day, and the choice of photography equipment was perfect. In my analogue cameras there is not a single battery, and it was possible to safely shoot at low temperatures. My friends digital cameras quickly discharged, while I continued to take photographs. I only had batteries in the light meters, but I always kept them warm in my pocket.

This time, when the summit was storming, there was again a strong wind, but there were no clouds or blizzards. I set up a large-format camera and was photographed with the flag of the Art of Foto gallery. At that moment it was a triumph of film photography, when you realise that everything is possible!

Returning home, I developed all films. Ilford FP4 sheet 5x7 inch negatives were almost all ideal for printing, 35mm frames became more various. After that I organized the exhibition — “Elbrus. Two Peaks ”. I displayed my 20x30cm prints made from a small format films, 50x60cm from a large format films and even one shot 70x90cm printed on Ilford Glossy Classic FB roll paper. The exhibition was very successful and visitors especially appreciated the atmosphere of the mountains and landscapes, and the power of the human spirit in the portrait shots. This could only be fully captured by film photography. 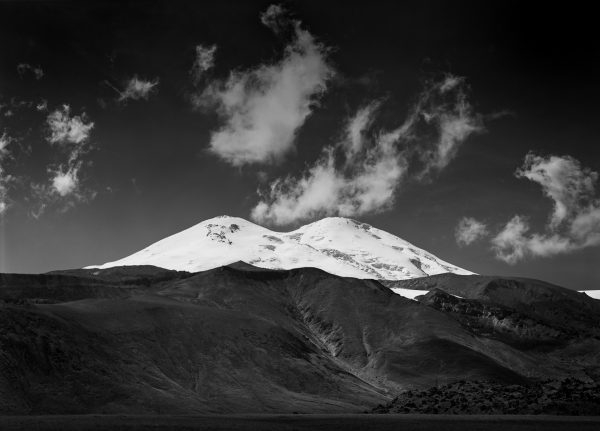 After the exhibition, a group of professional climbers invited me on an expedition to Pakistan, to the hard-to-reach and practically unexplored Khane Valley. Despite the fact that I have been mountaineering for less than a year, I certainly agreed. Only on one condition — I will go on the expedition with my large-format camera, because this is how I live and what I believe. I am not interested in travelling or photographing in any other way.

Now we are actively preparing for the expedition, including studying the possibility of mounting the camera to a big-wall at an altitude of 5000m. And of course, I don’t have a question what film to take, but rather how many boxes with the films.

The list of links for all Anton’s social media and websites:

More than 15 years engaged in black and white film photography of medium and large formats.

– Participant of exhibitions of analogue photography in Russia, Germany, France, Japan and Italy.
– He is one of the founders of the Art of Foto project and the art director of the gallery of the same name in St. Petersburg.
– Participated in workshops on manual printing and toning in Germany with companies Heiland Electronic and Moersch Photochemie. Participant in the master class Black and White Fine Art Printing by John Secton (USA).
– After developing the footage, Anton prints black and white photographs by hand on silver-gelatin baryta paper. Anton feels this is the best way to convey the artistic value of his work, so that the viewer fully understands the feelings and ideas that were with him at the time of shooting.
– Photo expeditions:
Member of the expedition “Journey to Russia” (2013)
Member of the “Disappearing Tribes” expeditions (Indonesia, New Guinea, 2017).
Twice he climbed Elbrus with the flag of the Art of Foto gallery and film large format camera (13×18 cm). The result of these photo expeditions was a personal exhibition “Elbrus. Two peaks” (2019).