It was during a group exhibition that I discovered the practice of cyanotype. The Espace Liberté Gallery located in Crest in the south of France is a contemporary art space open to all graphic and plastic disciplines. The theme proposed by Au Jour le Jour was an ephemeris where 31 chosen artists (painters, illustrators, photographers, plastic artists) had to illustrate 12 randomly selected dates with their art. Two constraints were imposed: a maximum size of 20cm on each side and the same selling price for all. I was concerned about photography and how easy it was to reproduce compared to painters, illustrators, etc. for whom each work is unique. Before responding to the call for applications I looked into which photographic method would best approximate the unique print.

There are several: palladium, salt paper, polaroid, van dyke, etc. It was the cyanotype that caught my attention, I love its blues and its contrasts close to graphics (I drew a lot in my youth). Each print is unique because you have to coat the paper with a brush, it is impossible to reproduce the gesture several times in the same way. Moreover, the chemical emulsion does not always react in the same way and causes unexpected variations. This is the interest of this process. 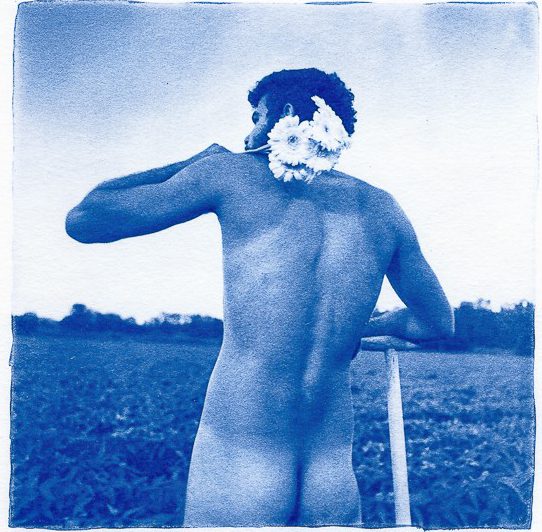 In 2020, after having proposed this medium I was chosen among the candidates for this adventure. The confinements allowed me to put it into practice. I also took advantage of this free time to learn how to develop b&w film, which I had not yet practiced. A set of discoveries and challenges.

For the photography, the square format required for the project made me spontaneously choose the Mamiya C330 medium format camera that I own (I like its simple, robust and clever mechanism). I used 2 Sekkor lenses, 55mm and 80mm.

For the development, I found on the net some tutorials which helped me: by following precisely the recommendations of Ilford and some forums all goes well (at the beginning only the handling of the spiral in the dark is a little stressful). I used exclusively ILFORD films: FP4, HP5, Delta 400, Delta 100, PanF50 as well as several developers ID11, LC29, DDX. 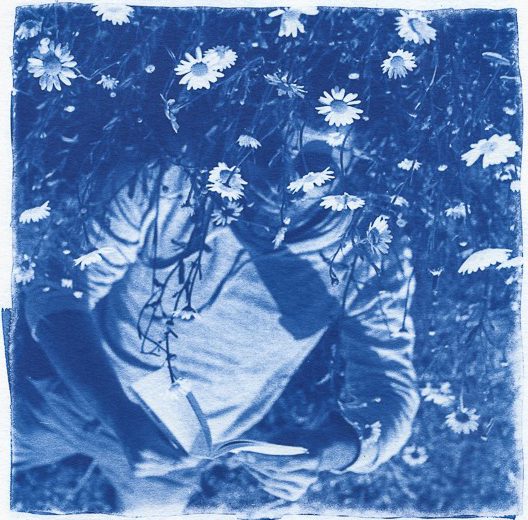 I wanted to make 15cm prints, so I scanned the original 6x6 negatives and enlarged them in LightRoom, used LR's contrast curve to modify the inter-negatives so that I didn't get prints with too much contrast. I then printed these inter-negatives on typons. These are the only digital steps in my process.

Under the summer sun

For the cyanotype, I found the Disactis Laboratory in France which sells both chemicals. The first tests I made and developed under the summer sun were successful in my opinion. But when I started to make "serious" proofs, the results were different from one print to another in contrast, tonality, moreover the autumn was coming and the less strong sun made the exposure time change. I then built a UV irradiator to stabilise the exposure time. I then created my method by noting different criteria (quantities, printing-rinse time, etc.) After I tested several papers to finally choose the Hahnemühle 300g satin grain. The cyanotype print is high contrast and I wanted to obtain progressive density-contrast variations.

The "When was he?" series

For this exhibition I wanted to create a coherent series from the 12 dates I was assigned. I wanted to make the seasons appear in this story and have the presence of one and the same character in different situations on the 12 images. This character would be the main thread of the series. I proposed the shooting sessions to a young farmer I had met recently. He is open to art because outside his work he makes music in his mini studio. I proposed to him to come and photograph him along the year 2021 without knowing the program of what I wanted to realize, he gave me his agreement immediately! 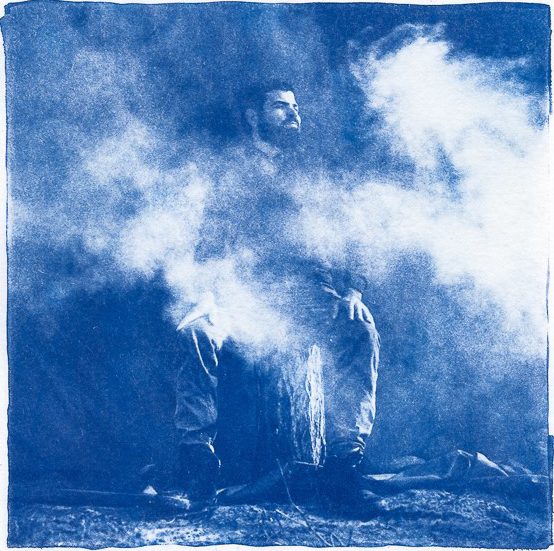 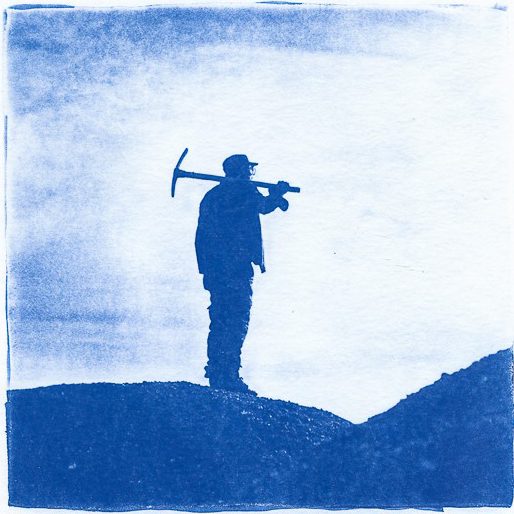 The birth of Django Reihnardt

For the first date, January 27th, I chose to illustrate the birth of Django Reihnardt who was born on that day in 1910. We did a scene with his caravan in front of Clément's shed (that's his first name) then he posed with his guitar under the weak January sun (I wish it had snowed). To go further in the quotation to this immense artist I superimposed a photo of a cloud (as a reminder of his famous piece "Nuages" that he wrote with Stéphane Grappelli in 1940). In cyanotype the blue of the sky and the white of the clouds come out naturally in the right colour. 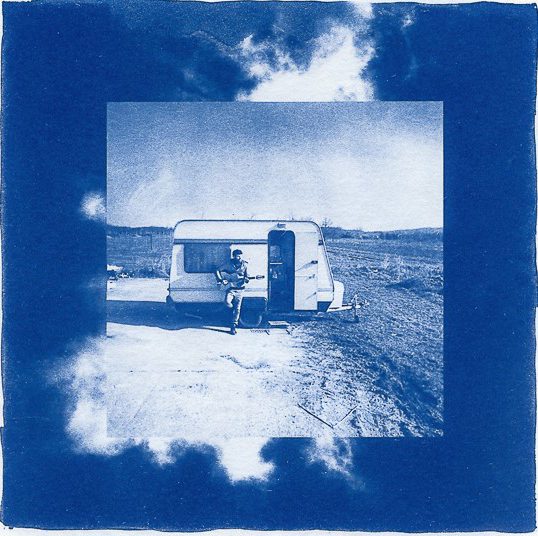 On 12 February 1918 the first jazz concert took place in France. An American regiment that came to reinforce the French army was composed of a professional orchestra, the Hellfighters Big Band. They played when they were not at the front. This concert took place in Nantes, the French discovered ragtime with incredible enthusiasm and the band had its moments of glory in France. My simple staging represents the discovery of a treasure at the bottom of a trunk. 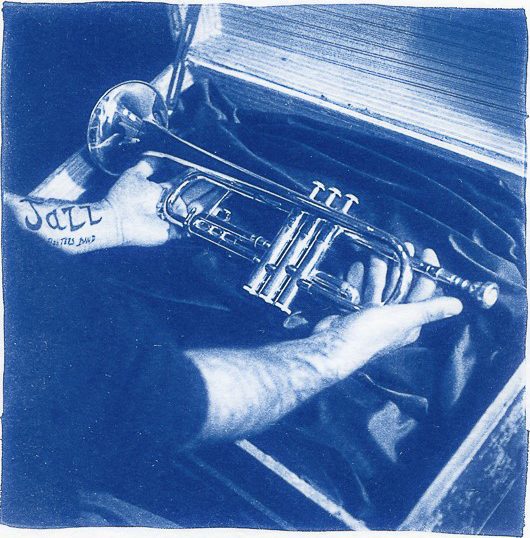 The man who planted trees

On March 15, 1954, the French writer Jean Giono published a short story "The man who planted trees". In the south of France, a shepherd reforests deserted plateaus during transhumance with his sheep. In this picture, the man discovers the miracle of of the nature he has created, by reading on one knee which the leaves of a book that the tress have grown from. 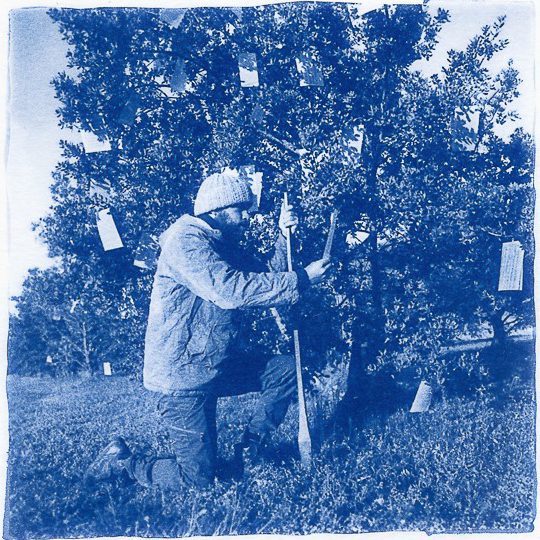 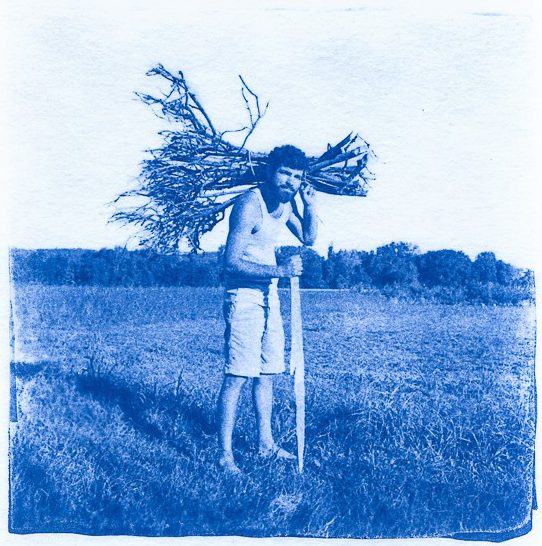 I have been taking photographs since I was 14 years old. This passion appeared at the same time as music, which I practiced assiduously in different bands. In 2010 I became a professional photographer, mainly in the field of jazz, a music I am passionate about. I publish my work in jazz magazines (Citizen Jazz www.citizenjazz.com, Jazz Magazine…). I regularly exhibit my work in galleries and music venues. My photos can be found on a large number of contemporary jazz records and publications.

To see the series: https://www.christophecharpenel.com/quand-etait-il