Nashville born Joseph Patrick or Photojojo was nominated by Laura E Partain back in October of 2020. Known for his creative shot choices and great use of light, we're excited to find out more about him.

This is one of my favorite shots. Here it was a combination of a few things coming together perfectly to create an image that perfectly aligned with my vision. The model is a friend I met the year prior at a Nashville fashion week event. I remember sketching out an idea and clearing out the room to drape the canvases for the background. This was shot on FP4+ about three years ago using a Pentax 6x7 with the 105mm f2.4 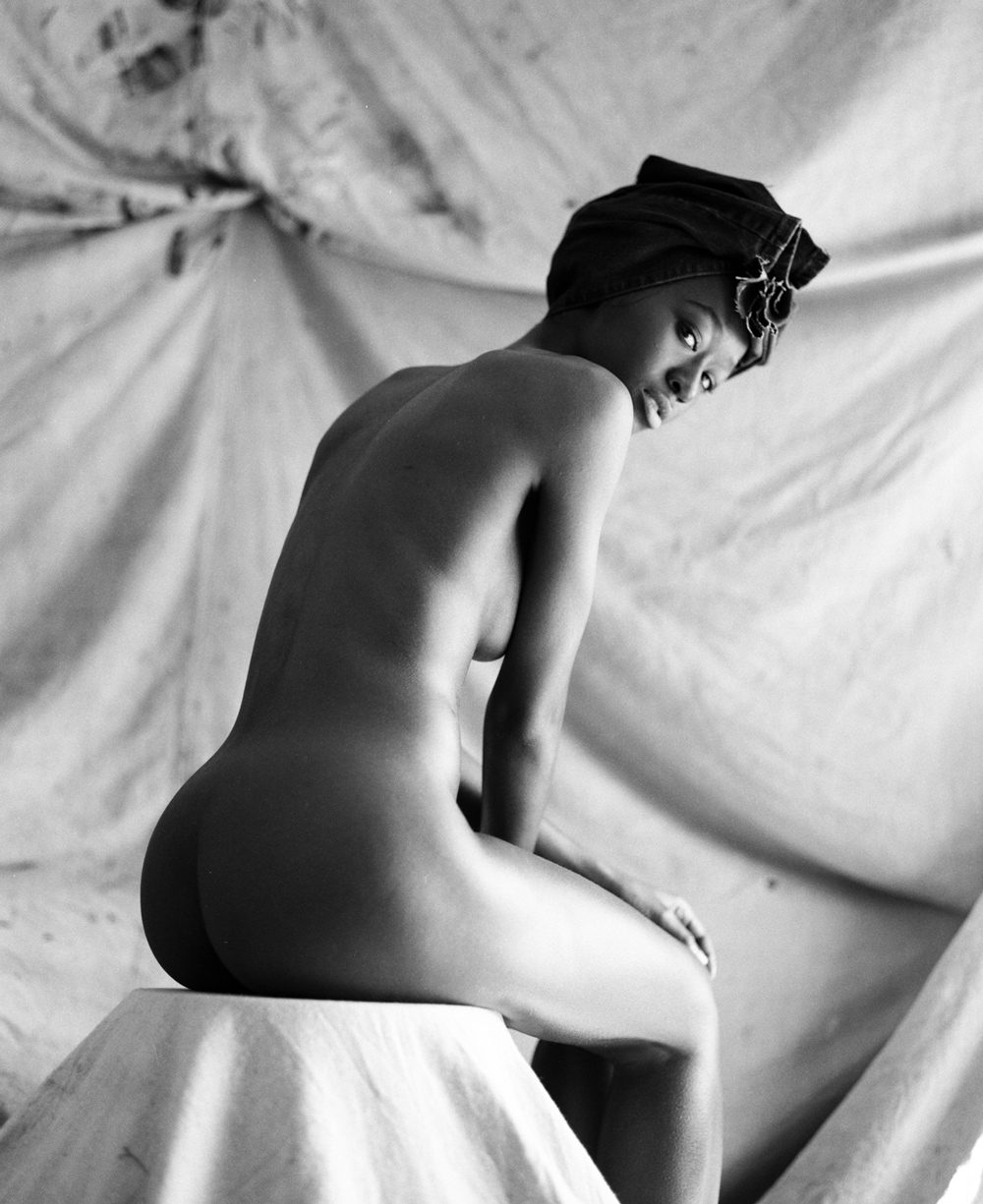 I'm a portrait photographer but I focus more on environmental portrait editorial portrait fine art those sorts of things. In my area I focus on building and developing new models and helping people rebrand, giving them a really solid platform to start their careers.

I started shooting film by accident. I have broken my first point and shoot digital camera and I went to Goodwill and found an old Canon rebel for $3. I spent a lot of money on film and printing so I thought to myself I might as well get good at it to stop wasting money.

My biggest inspiration probably has to be Herb Ritts. His work has such beauty and emotion and the way he used sunlight to capture definition and texture on his subjects has always been a source of reference. He was the reason behind me picking up the Mamiya RZ. 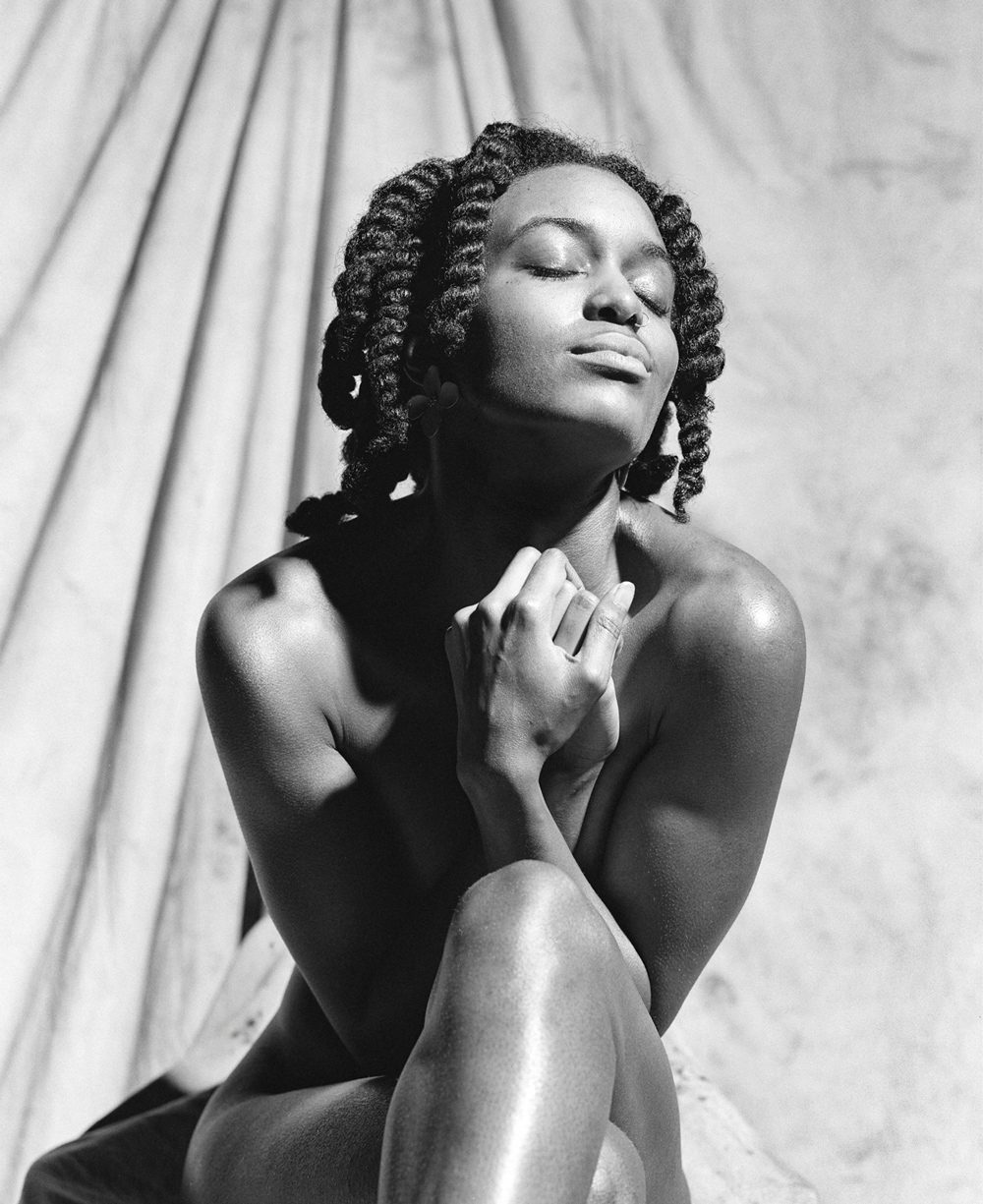 The best piece of advice I’ve gotten was to “learn your history.” I think one thing that is often overlooked is history and giving context to your work. It's one thing to have pretty images, but it's another thing entirely to have your work hold up against your influences and contemporaries.

Currently I have a couple projects in the works. I am working on reimagining "Jet beauty of the week." Jet was a weekly magazine running from the 50s to the mid 2000s that focused on black people black lives and entertainment news as it related to the African American community. In the early 50s it started its own sort of pin ups that ran in the magazine that featured women from all over the United States in the magazine. I'm reimagining the project to embody all black women.

The other project is a bit more in depth. I call it "The Socialized Experiment" . It's a multifaceted project but for the most part it is a series of prints that were created by covering people in a black ink and creating large Rorschach-esque ink blots on canvas. This project is designed to allow the viewer to have space to bring their biases, their fears, hopes and dreams to an image. My hope is that it gives those who don't typically speak about art space to voice what they're seeing and to their feelings. 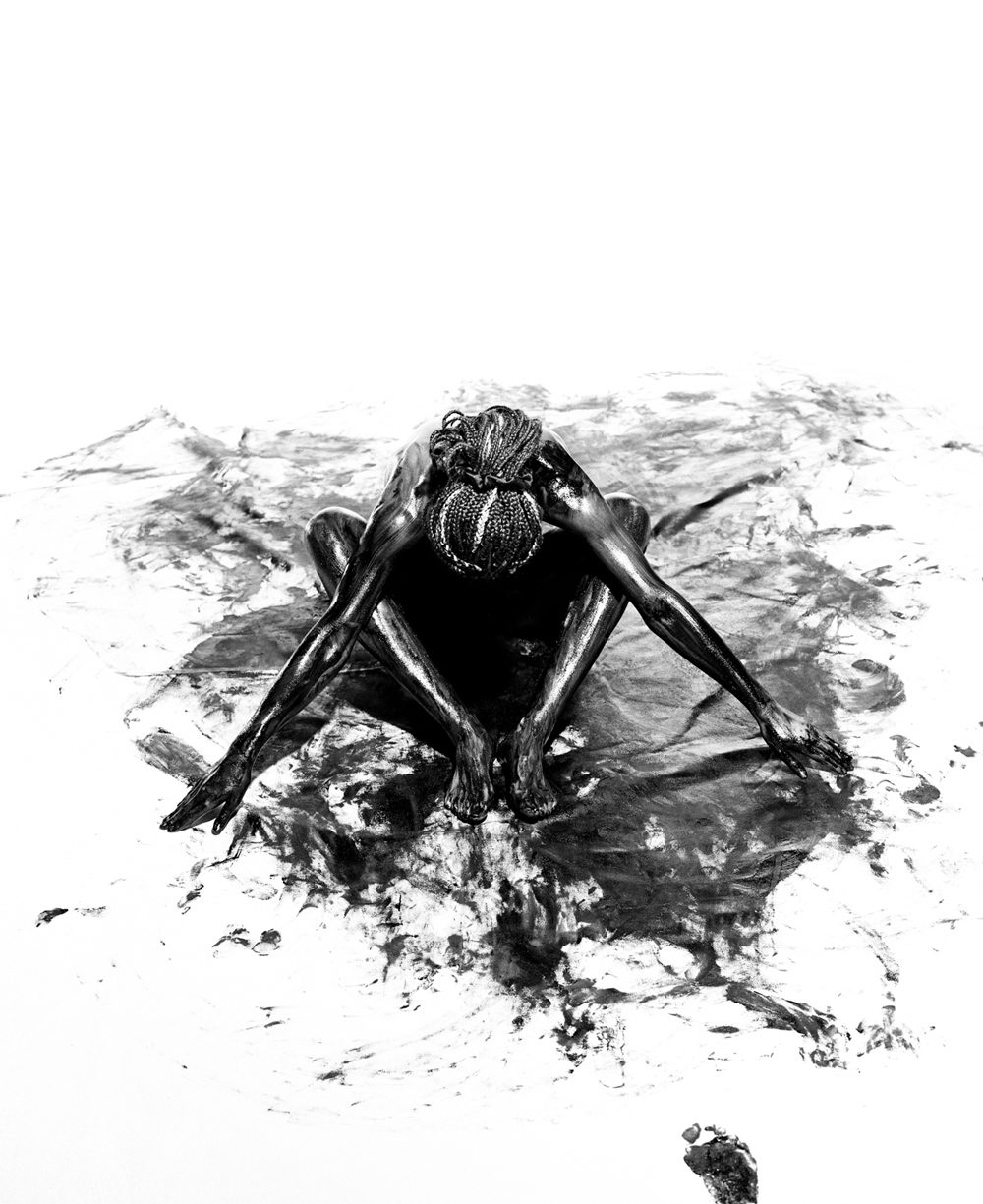 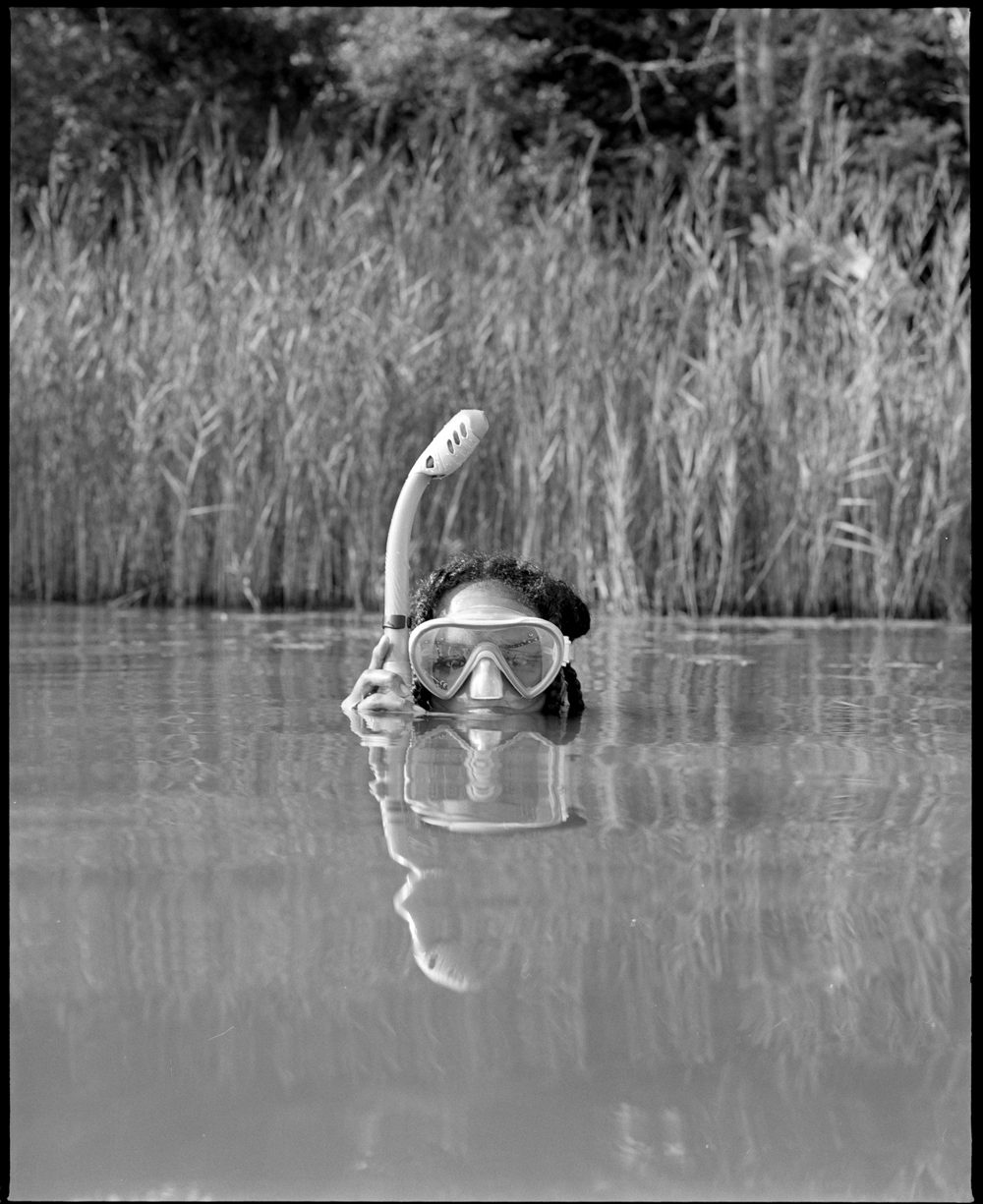 Ooh that's a tough one, I'm hoping my next shoot is in my new studio which is an old factory. As far as kit goes, I'm usually toting my rz67 and a wide array of lenses, usually 65 mm the 110mm.

I usually decide which film I'm going to use by the mood that I'm going for.

Typically when I'm doing portraiture for client work I'll use a color film. But for my own personal work I'm usually back and forth between fp4 plus and HP5.

What are your photographic goals going forward? (Can be business or personal). 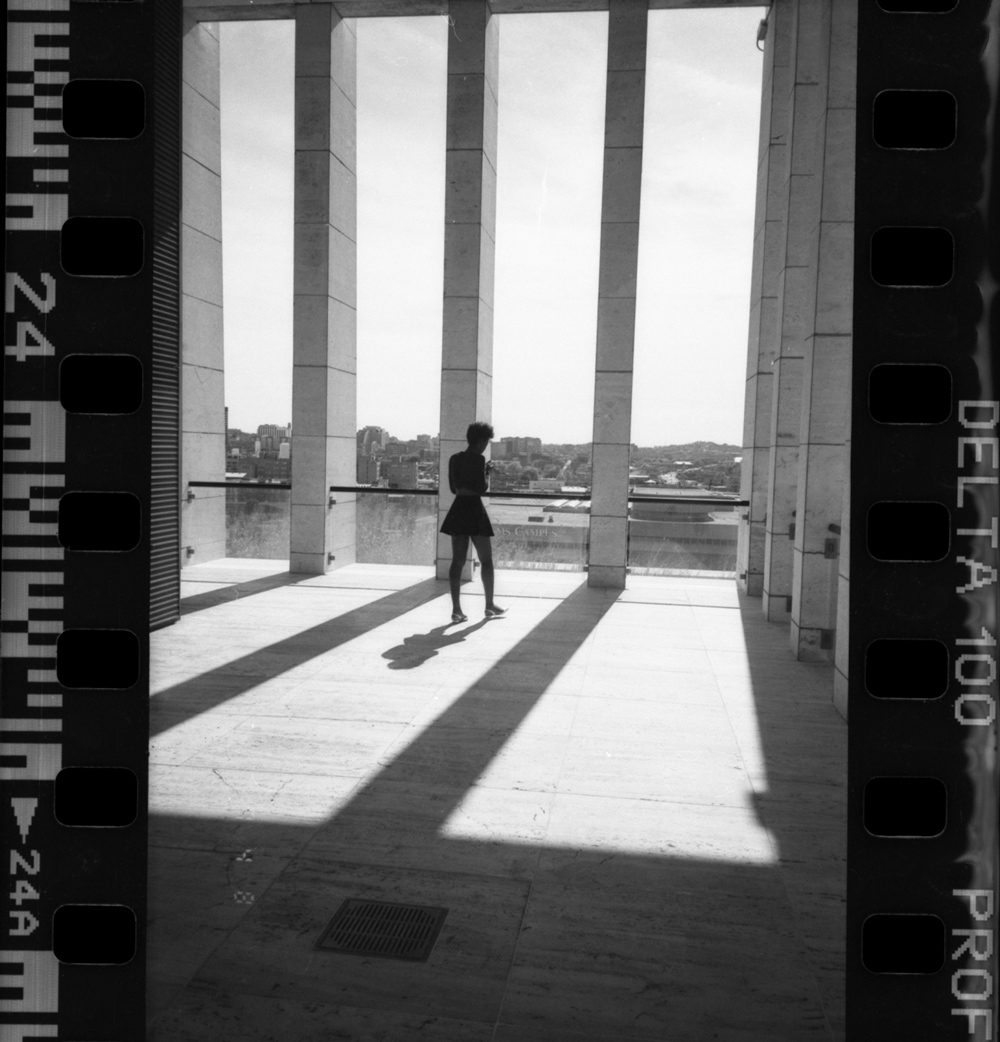 We all need a bit of inspiration and love so this is your chance to tell the community about yours . From the film photographers whose work inspires you, the labs you trust with your film, your ‘go to’ film photography stockists, your favourite community darkrooms or just anyone in the community who you feel deserves a special mention.

Give a shout out to your 3 favourite film photographers currently active on IG or Twitter and briefly tell us why others should follow them.

@zonefocused: I went to college I went to college with Chris and he really got me to focus on getting serious about photography. I used to see him on campus shooting everything and I was like I really want to get on my grind like him. Currently he's living in Japan and he's doing a lot of film photography work on his YouTube page. The most recent thing he's done is he's picked up an intrepid 4x5 and that has been interesting watching his journey with that.

@stainedlens: I met Jeremy through my job at a local photo lab. He would always bring in tons and tons of film at a time and we'd always talk about new film stocks and what cameras we were using and all that kind of stuff. Jeremy's got a great eye when it comes to picking out new models and really pushing the boundaries on lighting and pushing the limits of the film that he's using at any given time.

@thisishaje2: Ejah is a model and a photographer. I met her also, through my former job at the photo lab. I wound up selling her a Canon ae1 and she's been using that to shoot around a lot. She's always telling me "oh I'm just a beginner I'm just a beginner" but she really is doing a lot of good work. I recently loaned her my Pentax 67 so I'm  excited to see what she comes back with.

Give a shout out to your favourite photography YouTube channels (apart from the @ilfordphoto one).

Vincent Perry Jr.: I learned about him pretty recently through my friend Chris and I've really been enjoying the work that he's been putting out on his London Project.

Grainydays: I definitely love this page because it is sort of a break with the normal analog film pages that we see on YouTube in that he injects quite a bit of sarcasm and dark humor into his videos.

Talya Adams: she shoots on a bunch of different camera systems and does comparisons. She has a few tutorials sprinkled in there as well. 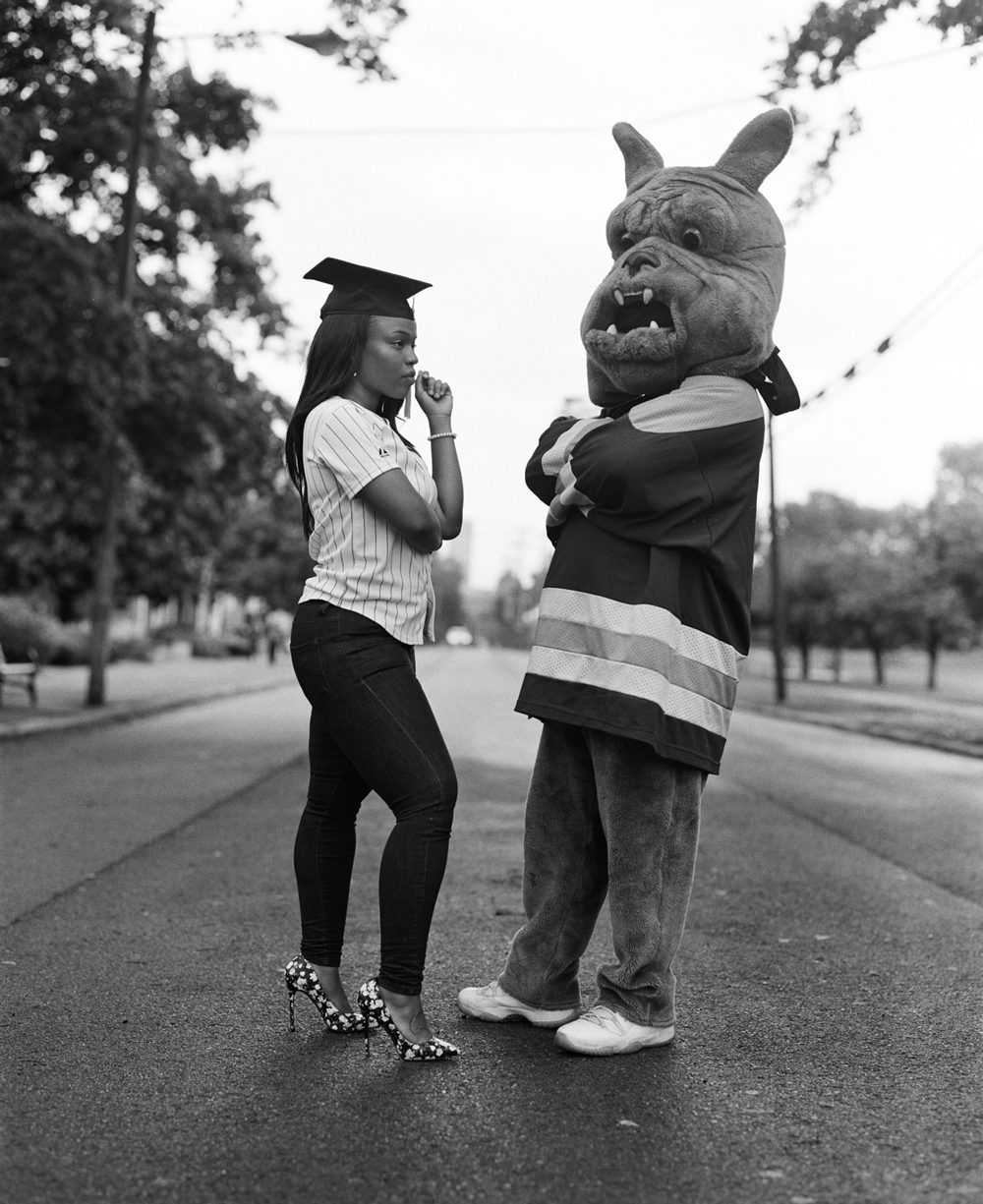 Give a shout out to your favourite photographic retailers (name, location and website).

I don't really have a favorite retailer here. I was working in the camera shop DURYS, but it has since shut down during the pandemic.

The three I used the most would be

Give a shout out to your favourite lab service, if you have one, (name, location, website). 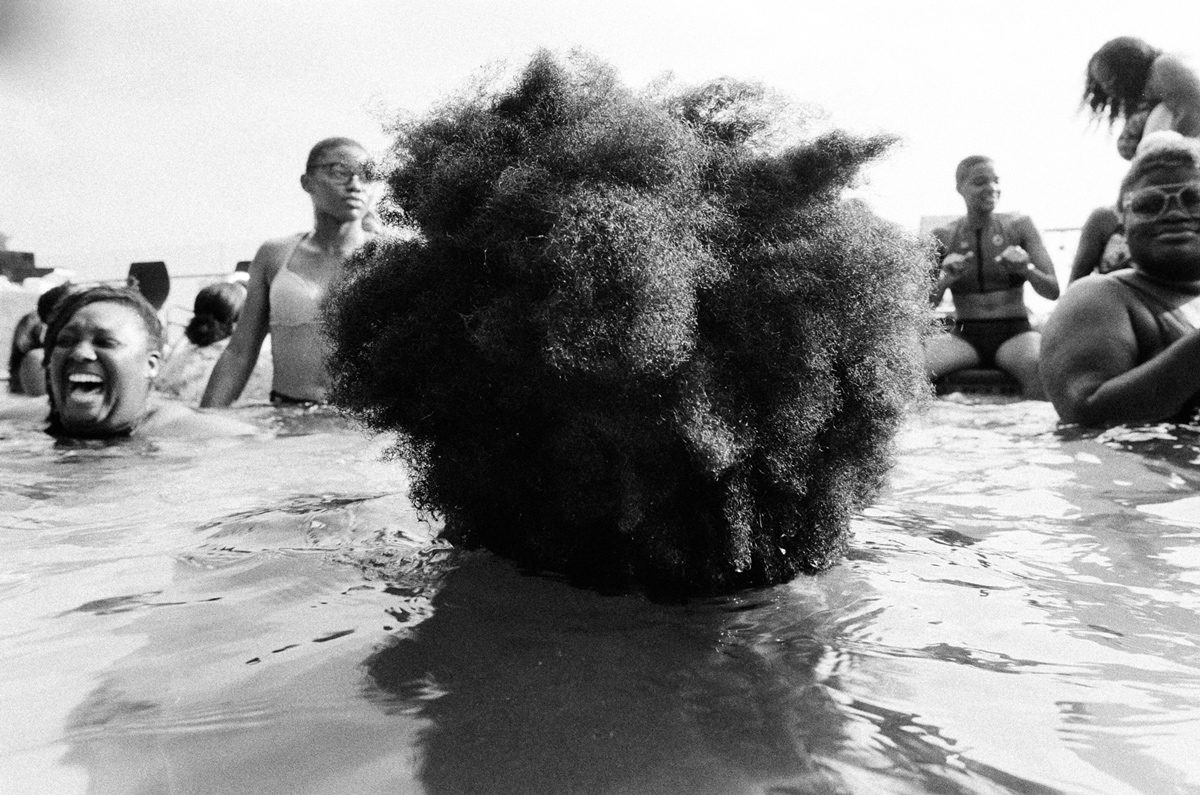 What film cameras do you own and which is your favourite?

I own so many, probably too many of the list here. My go-to's though are the mamiya rz67, my Nikon f3 or Canon F1n.

Aside from gear, my headphones, a good pen and a small notebook I'll make it into my camera bag.

The best piece that I've found was probably the pair of Nikon F3s that I found at a used bookstore. They were casually tucked away in a corner both with no lenses in the lens caps and I immediately knew what they were. I had been looking for an f3 prior to that so it was kind of serendipitous.

So my favorite film has to be FP4+. I really love contrast and I love being able to pull a little extra contrast if I need it. I also use pretty fast lenses and occasionally I'm in the studio so being able to have that low ISO flexibility is a great help.

Right now my favorite paper is the Multigrade RC deluxe in glossy! I'm usually only making contact sheets with it but having something tactile at the end of the day is always a great feeling. 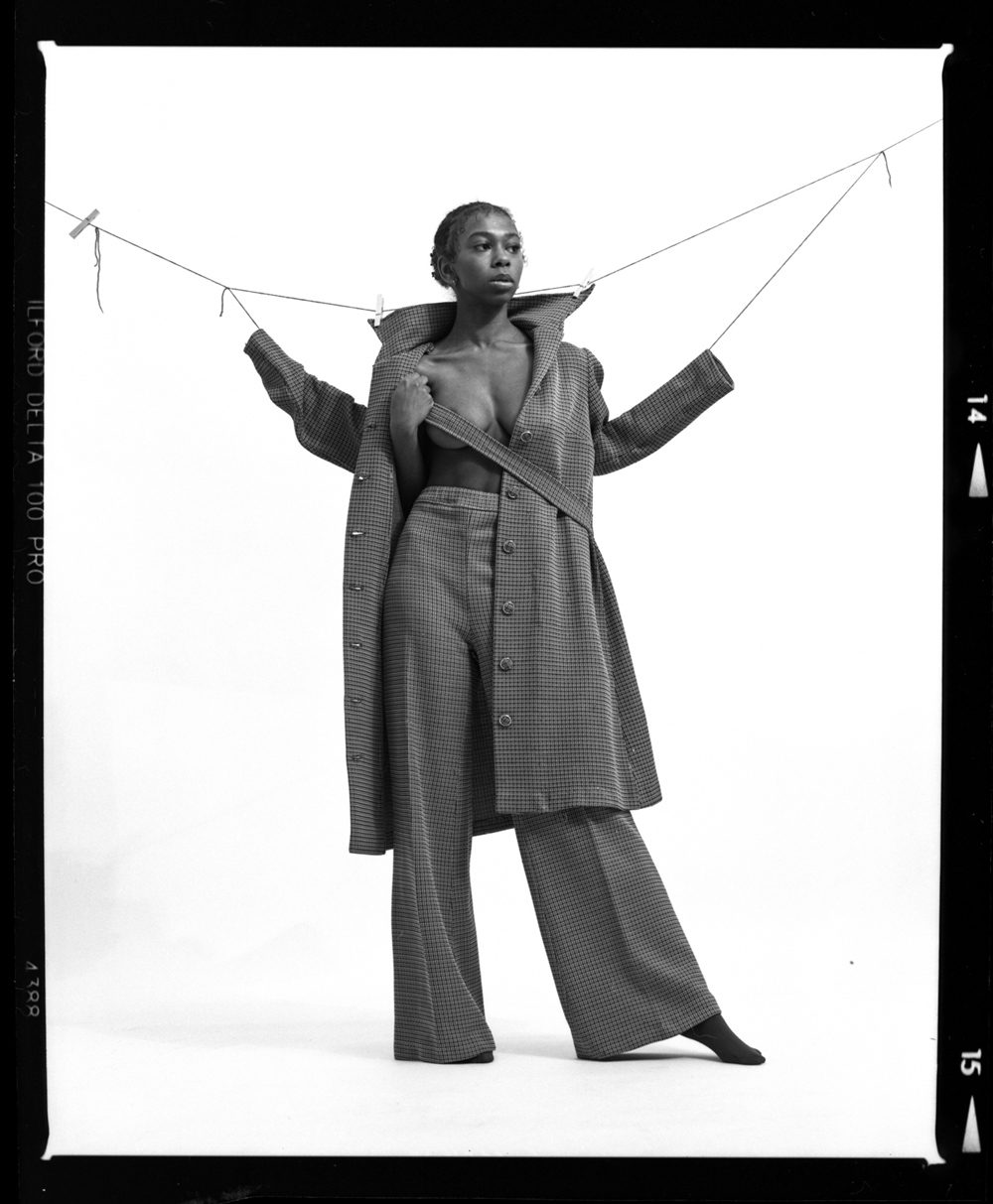 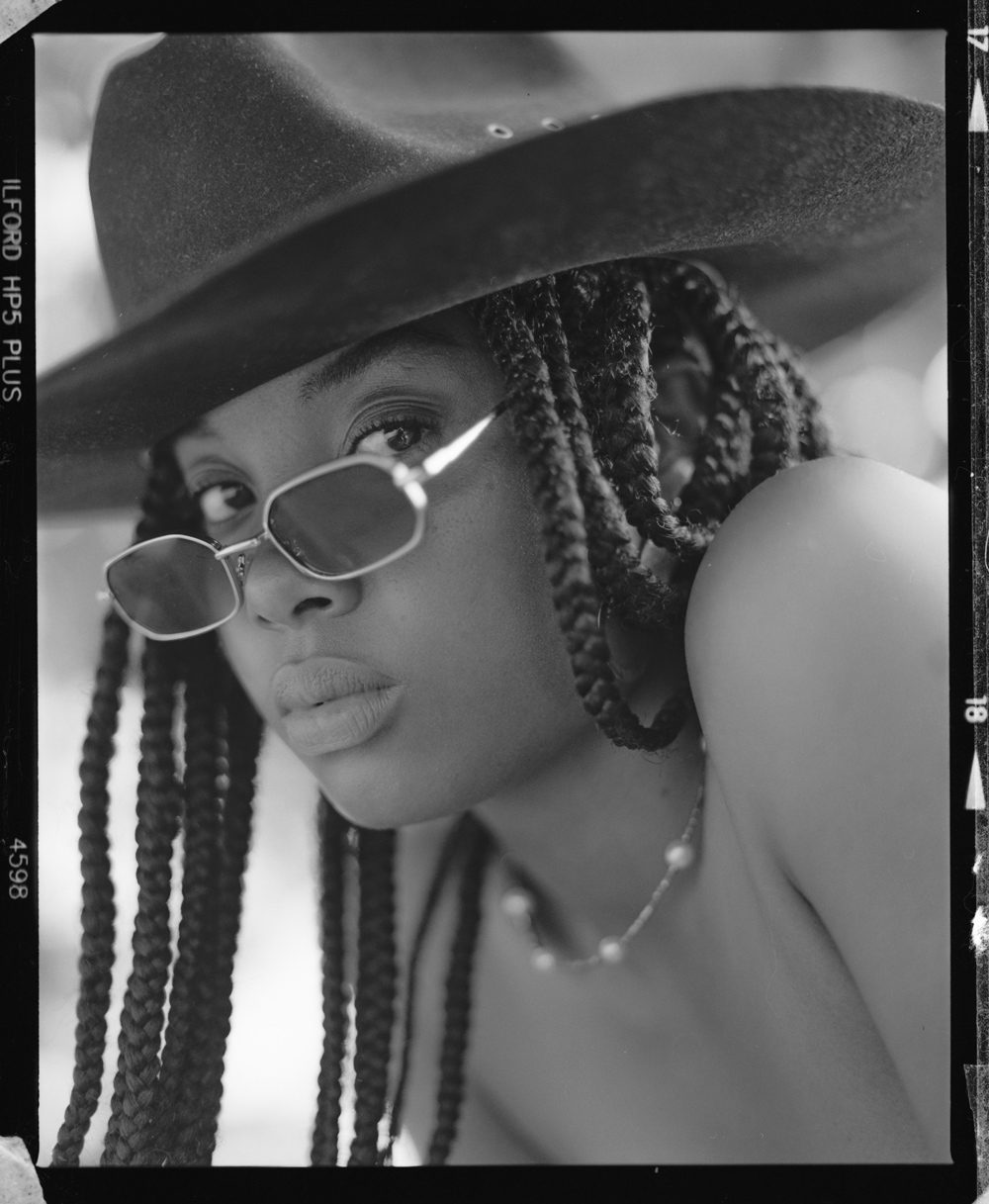 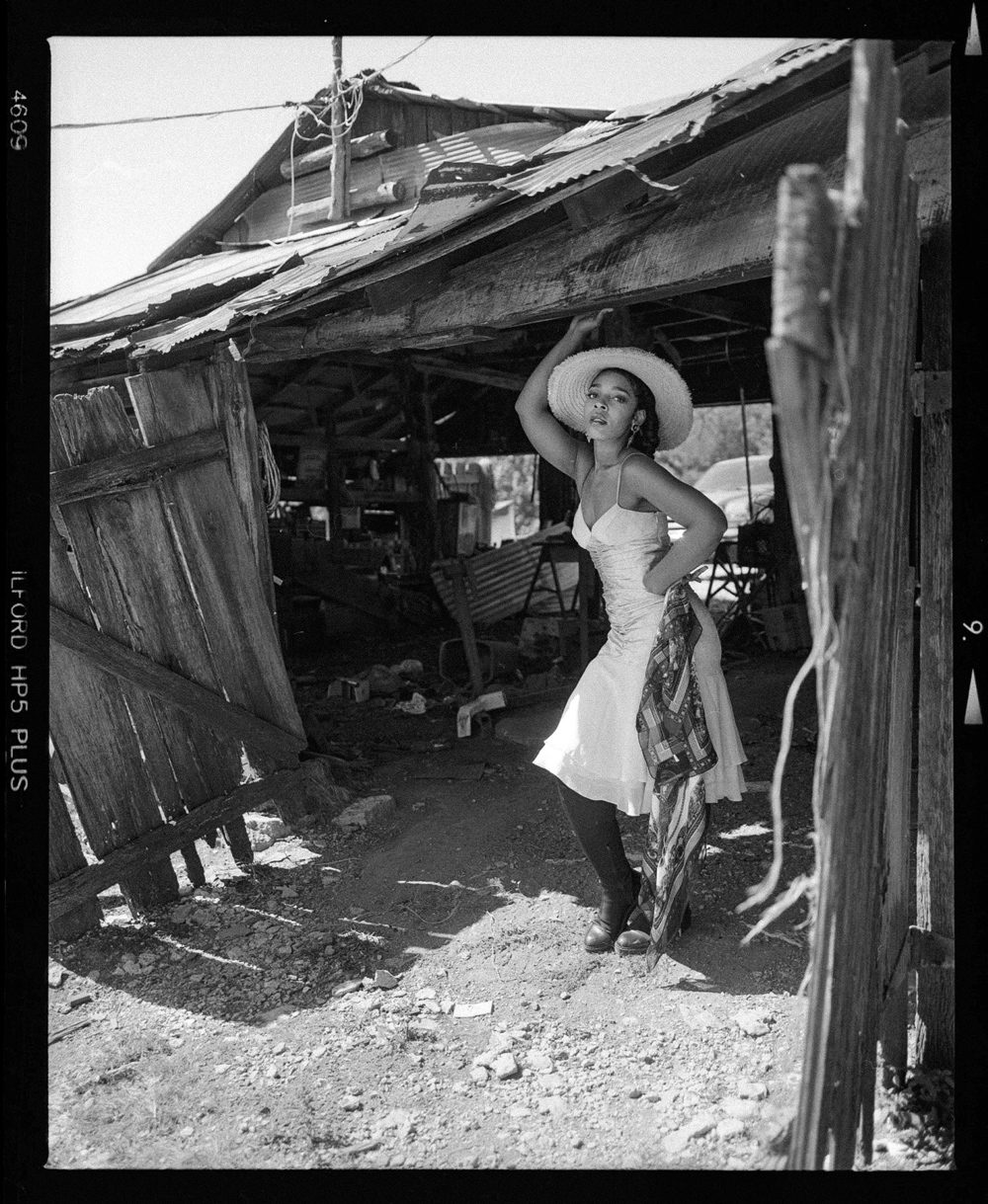 Joseph Patrick is best known for his attention to light and form in figure and editorial portraiture photography.

Born in Nashville, Tennessee, Joseph holds a B.S. degree in Electrical Engineering from Tennessee State University. He cites this indoctrination to his obsession with light in both its physical and artistic properties to create photographs ranging from stark, contrasty, and dense to soft and sometimes moody editorial portraits.

His recent shows include a solo exhibition at OZ Arts called The Socialized Experiment and a group exhibition Deconstructing Cowan, in Nashville, Tennessee.

THE ARTIST IS SEEKING REPRESENTATION

Our theme was #leavesonfilm - For this week as long as there is a leaf or leaves in the image you were good to...
Read More