Interview number four in our Behind the Film series is with International Sales Manager and relative film newbie Alex Hancock.

I am Alex Hancock and my role is International Account Manager. I've been with HARMAN for 3 years now.

Tell us a little about your day to day role.

My role is to support our international partners who manage the brand and sales in countries around the world. I work directly with all of their teams to make sure that users like you have access to our amazing range of products, no matter where you are! In normal times, I spend quite a lot of time travelling to different places, so be sure to look out for me at various events.

My favourite photo is of my dog Humphrey shot on HP5 PLUS.  For me a photo either needs to evoke the imagination, provide interest in its structure or provoke some kind of emotions or memories. For me, this image covers all 3. The shape of his body is like a sculpture; the way he gazes in to the distance makes me wonder what he is looking at and what he is thinking; and the look on his face makes me feel the love I have for him. And the photo also reminds me of a time when I was new to and learning about film photography.

Humphrey on HP5 PLUS

I am sure to a professional, that it would not stand out as a perfect picture, but for me, the beauty in photography is what it means to the taker. This photo has an almost ethereal feel to it – the way his face is in focus combined with the grain, and the timeless feel that black and white conveys.

Like most people my age (early 30s!), life began when film was the way we all took photos. So holiday snaps in between with Christmas at both ends of the film was pretty standard. I have always had an interest in photography, but it wasn’t until I joined Ilford Photo that I got the bug so to speak. Since joining, I have found my dad’s and grandad’s old 35mm and medium format cameras, and have really enjoyed experimenting and learning how to use them.

I am quite open to the subjects I photograph – I am always looking for something that interests me. Of course, the photos that mean the most to me are ones of people (and dogs!) I love, but I would like to think of my photographic style as quite artistic. I am a very visual person and love to pick out details, different structures and layers and contrasts. This could be in the shapes I am capturing or even the materials, for example natural and man made.

When I am photographing people, I like to capture them in a moment or in a natural pose. It is rare to have photos of people we know that show them in a pure state – culturally most people take photos that are staged to capture a moment, but I like to capture people as I see them – most of the time, not posing for a photograph, but as they are. How do they look when they don’t know someone is looking, or when they are just staring contemplatively in to the distance? For me, black and white really lends itself to this style as there is a rawness and honesty captured in this moment in time.

I have now been shooting on film for about 3 years, and I have found that my mistakes have mostly been the worst photos I have taken, ones which have been completely blurred. However, there are a few which I love – one featured here which I took in a sand storm on the beach. I had hoped the image would be focused and pick out the way the wind was blowing in the sand. It didn’t quite come out as planned, but what did come out, to me looks almost like a painting and whilst it isn’t necessarily clear what the image is of, it is very atmospheric and thought provoking. I think it would look beautiful framed and would make a great talking point.

Sandstorm on beach on HP5 PLUS

Not as many as I would have liked – I have shot on HP5, FP4, XP2 and the Kentmere films. For now I am sticking to black and white as I just love the style and contrasts I can achieve – they have an almost artwork type quality that I just feel can’t be captured in the same way in other mediums. I also love that processing black and white film is a fairly simple process and one where there is creative control even after you have taken the image.

Do you develop yourself or take advantage of the staff discount at Harmanlab onsite?

A mixture of the two. I am lucky enough to have access to a great dark room at work, where when I have the time, I really enjoy processing my own film and printing my favourites. For me dark room time is about switching off from the rest of the world. When I don’t have so much time or am feeling a bit impatient to see my images, then I have taken advantage of the amazing service the team provide at Harmanlab.

Many times and it is something I love. Switching off from the outside world for hours is something we rarely do these days. It is a chance to reconnect with yourself, and is almost meditative in the way you connect with the physical and creative process in that moment in time. And of course, at the end of it, you have some pretty cool prints which you took and made yourself. It brings back that almost school-like feeling of achievement and satisfaction which as adults, we rarely get to experience.

I own 2 film cameras – an Ilford Sportsman medium format camera, generously given to me by a neighbour when they heard where I worked. And I also have a 1976 Nikon F which belonged to my dad. I love this camera in all ways – it is a great camera, but I have a strong emotional attachment to it too. My dad was an avid photographer and was really passionate about film photography. This camera travelled around the world with him and I therefore feel a strong connection to it, and almost like I am carrying on his passion when I use it. He looked after it really well so it is in great condition, but you can see where the metal is shinier where he has held it over the years, and it feels in some ways like he is with me whenever it is with me. 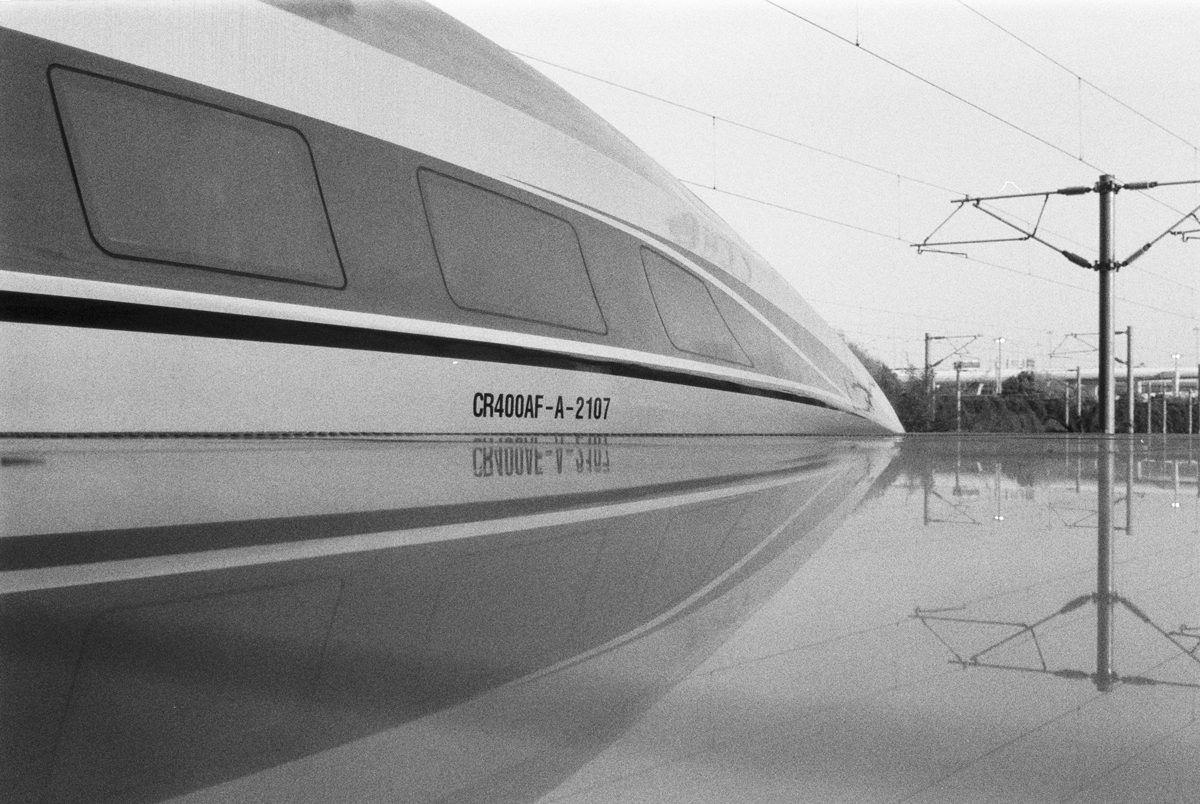 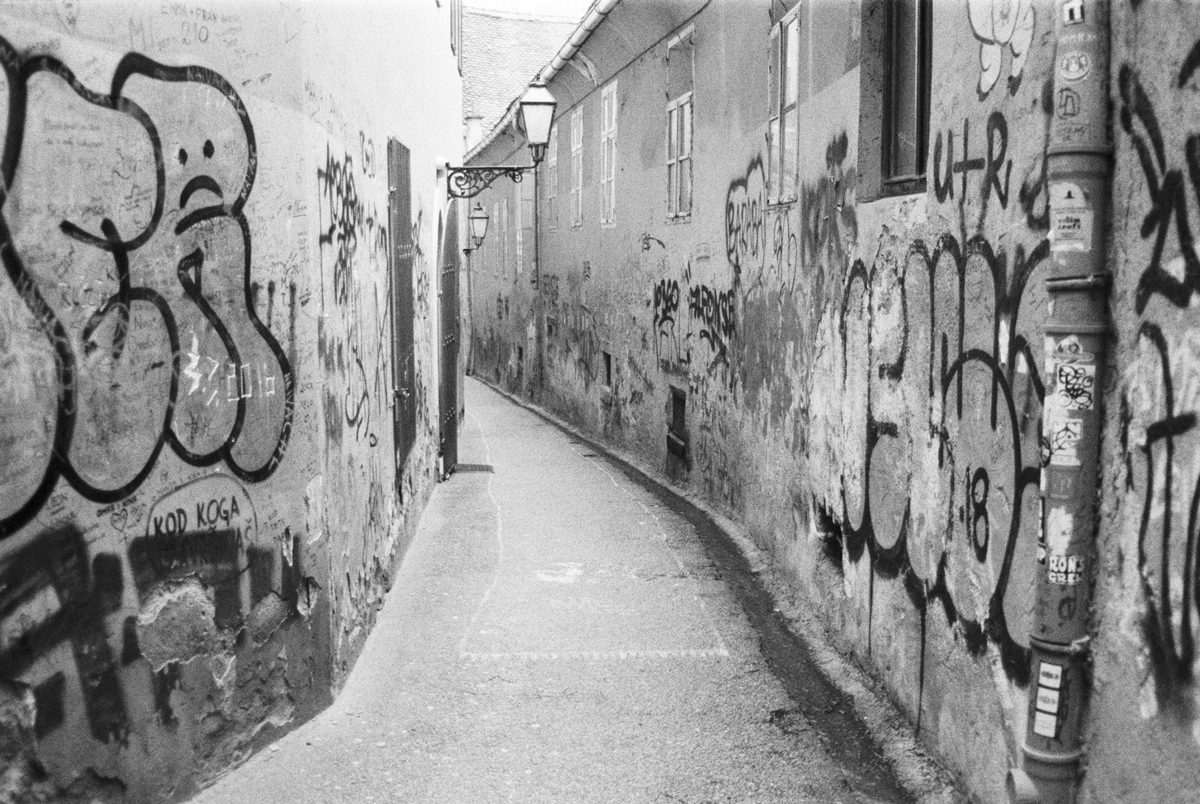 I am still at the early stages of my film journey, and therefore I would have to choose HP5. For me, there is a safety in the film which gives me more confidence when I am out shooting that I can capture the type of image I want to achieve. There's nothing quite like the excitement of processing your film, but also the disappointment when things haven’t gone quite right. I am looking forward to experimenting more widely and can’t wait to try SFX. – Some of the images I see on Instagram are just amazing. I do also love Kentmere film – the grain is just stunning and adds to that ethereal look I so love.

Alex Hancock has worked at Harman Technology as the International Account Manager since 2018. Alex grew up in the UK with mixed British-American heritage, having lived in various countries in Europe, now resides in Manchester, UK.