Basketball on film. Posted On 3rd December 2020 To Magazine

I started shooting film when I was 14, that's more than half of my life! Since then it’s always the same excitement to finally see prints and scans.

Somehow I never seriously dived into analogue indoor sports photography until corona. For the past four years I’ve been the team photographer of the HAKRO Merlins Crailsheim and they asked me to join them for the final tournament to finish the first basketball division in Germany.

Ten teams, one hotel, quarantine till drop out. I’m in. 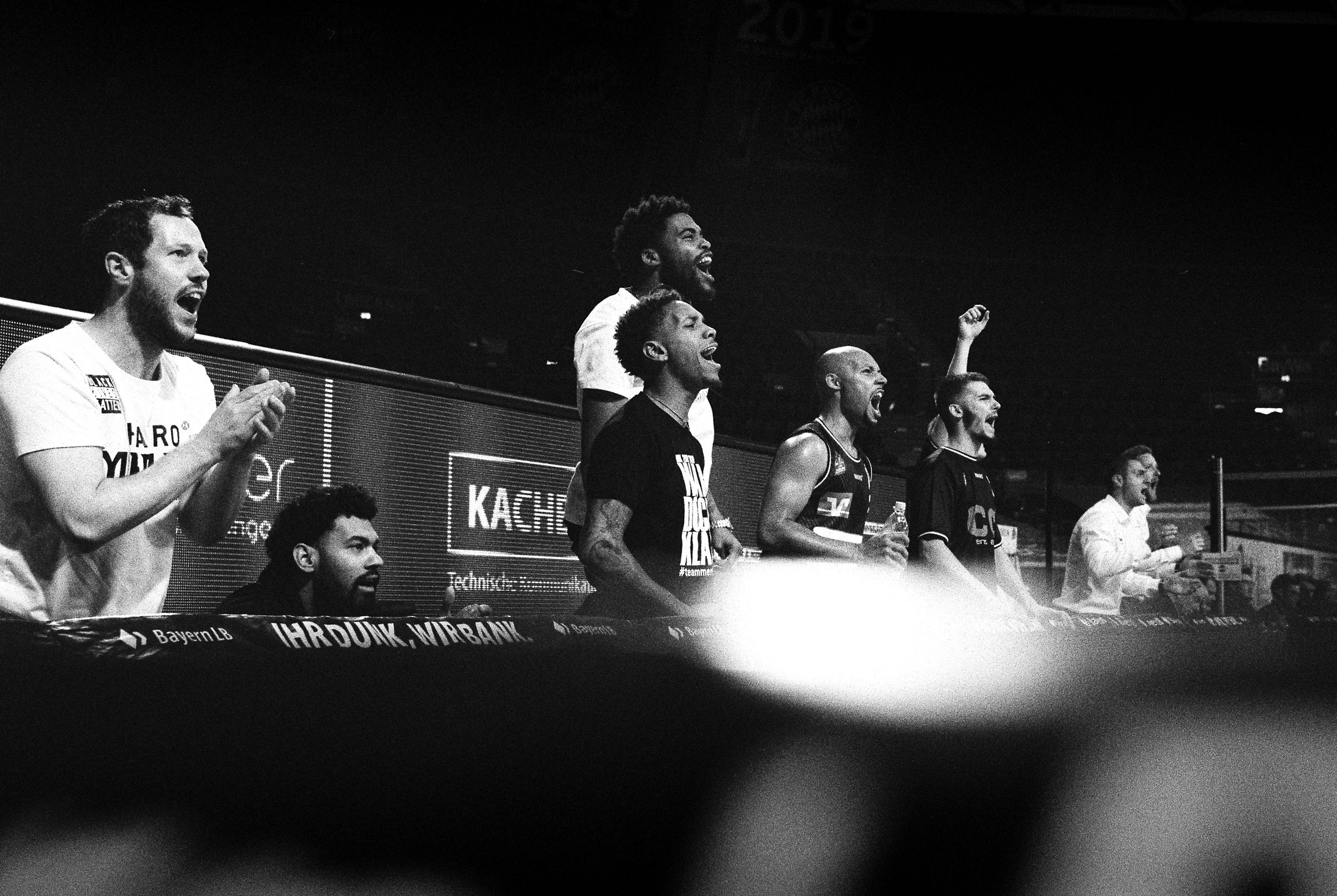 A week before everything started I called my favorite film lab Safelight and asked which Ilford film stock would be best. ISO 1600 would be enough for wide open Leica primes and 1/1000 of a second. Decided for Ilford HP5+ 400 pushed to 1600 to shoot on my M6 with a Summilux 35mm f1.4 and Summicron 50mm f2.0. 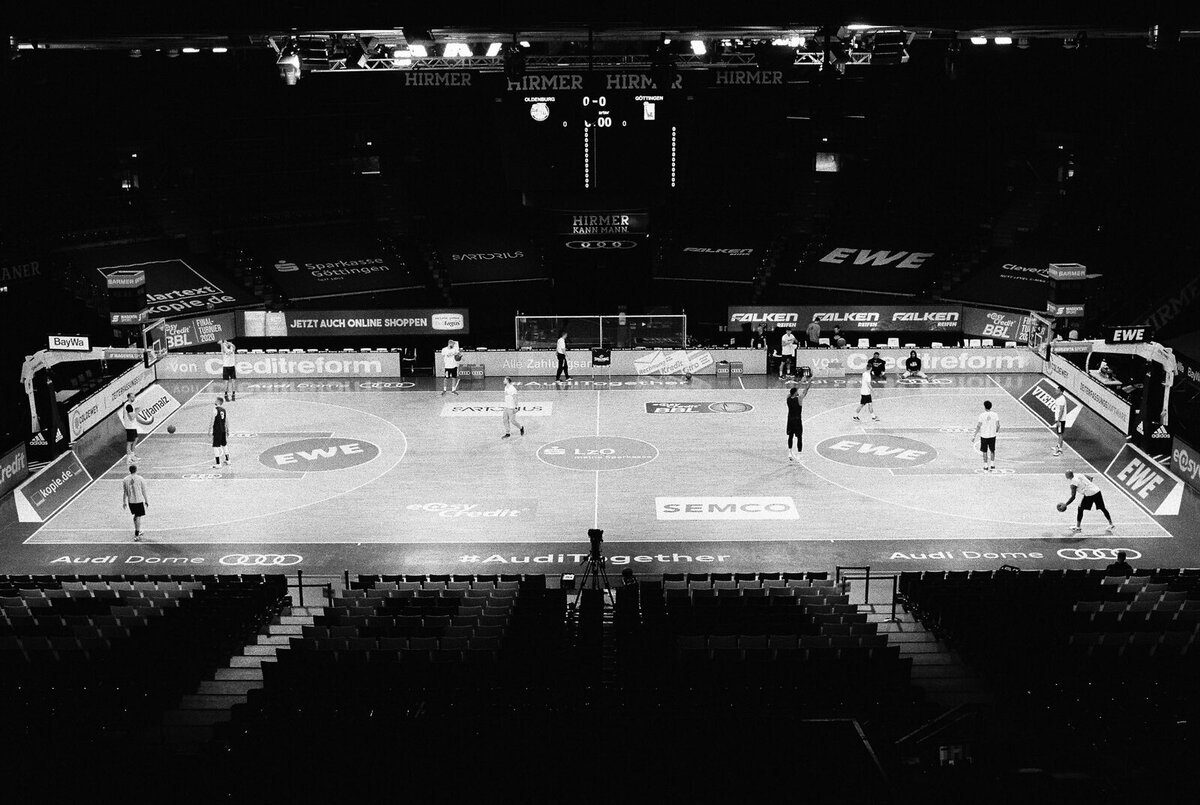 The idea just come by the fact that I will be probably never be again for so long this close with a team. Every team was allowed to bring only 21 people including players, coaches and everybody else. I was the only team photographer in the whole hotel, which shows how special it was to be part of this so called bubble. I had to take pictures for social media, a photo book and to film everything for a six-parted video documentary about the season. But the analogue project was pretty much my heart project. 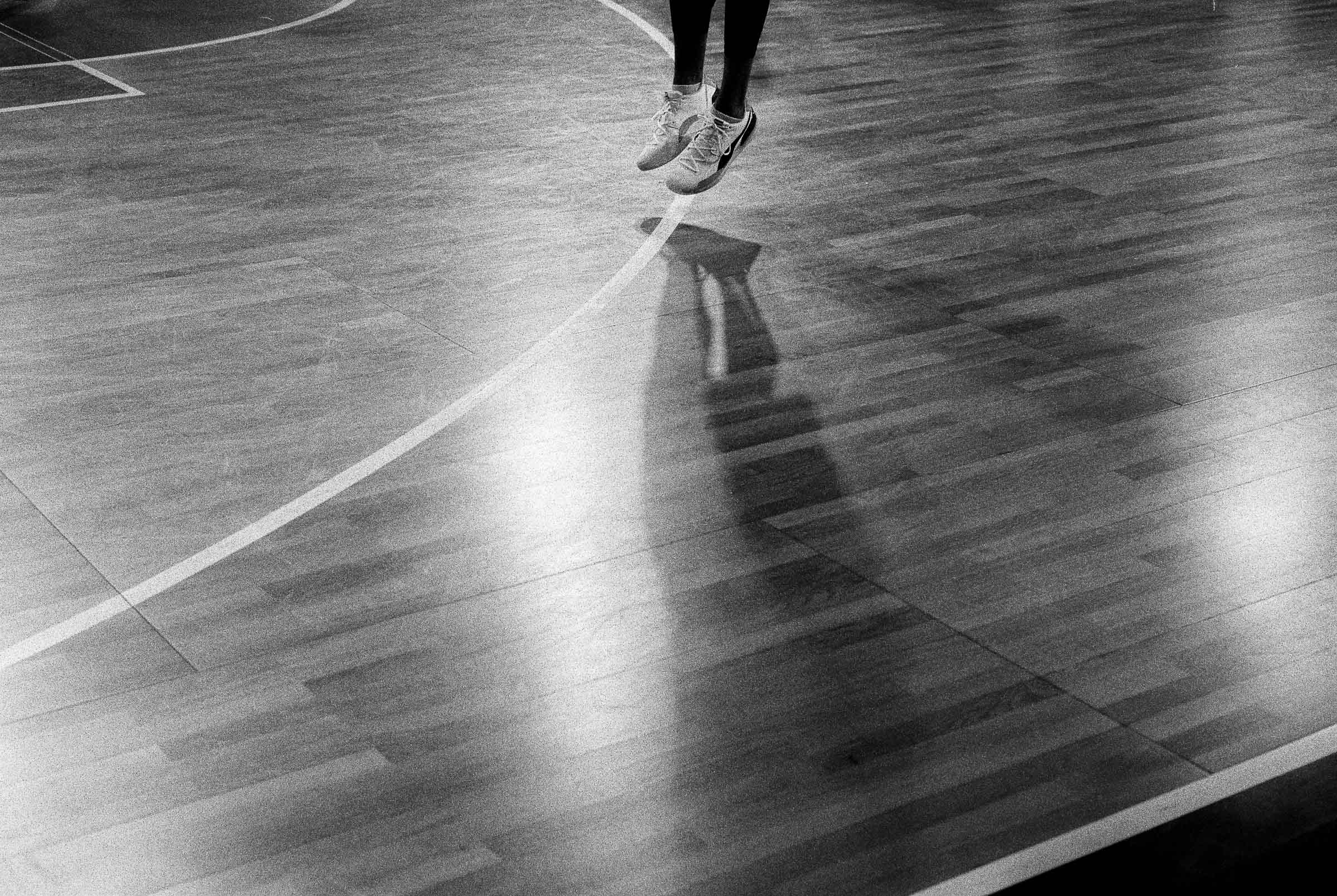 In the beginning I felt kinda uncomfortable. Does ISO 1600 gives me enough creative freedom? Do I need more than 10 rolls of film? How turns the grain out on a film, pushed from ISO 400 to 1600? How will be the look with indoor lightning? So many questions and unknown. 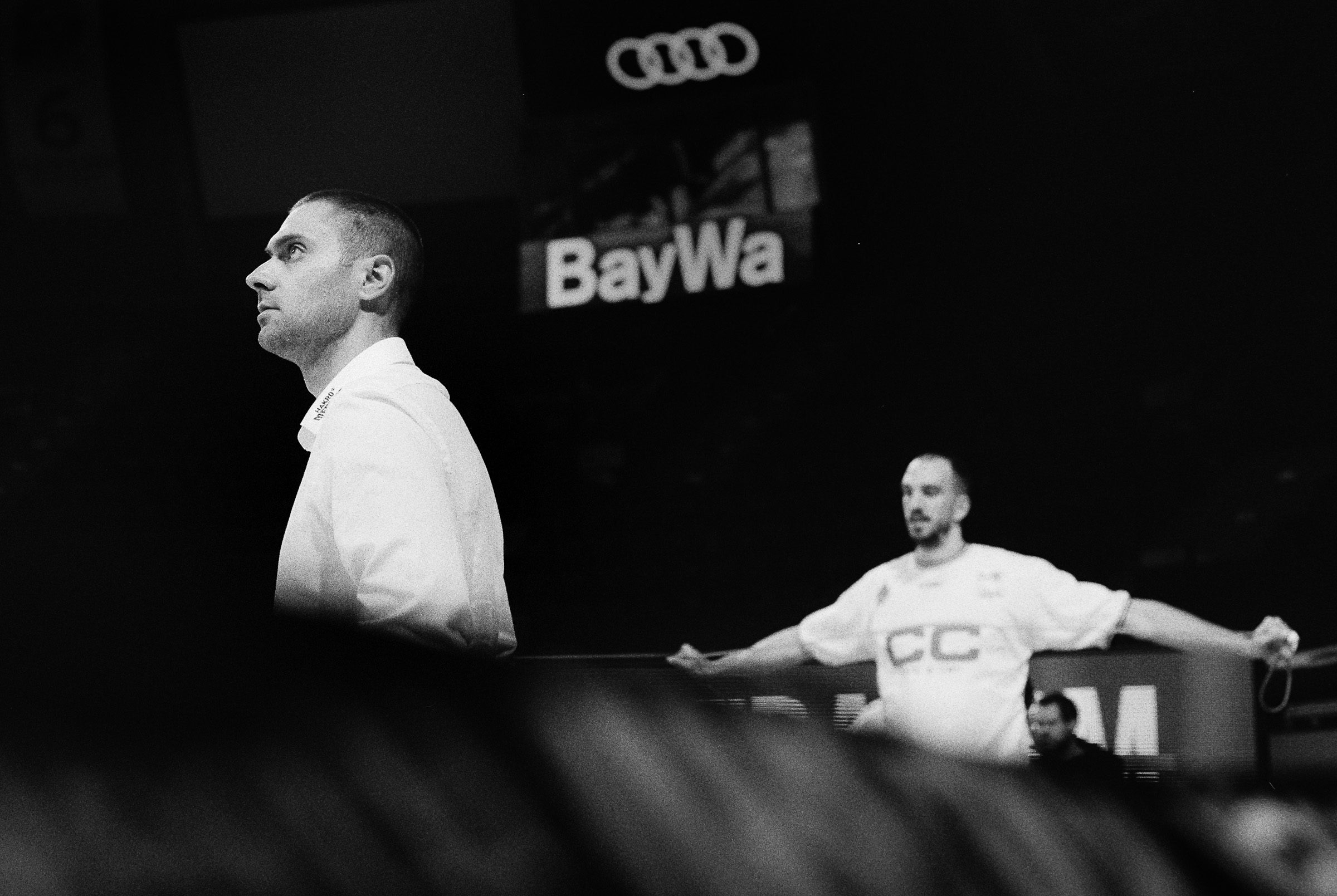 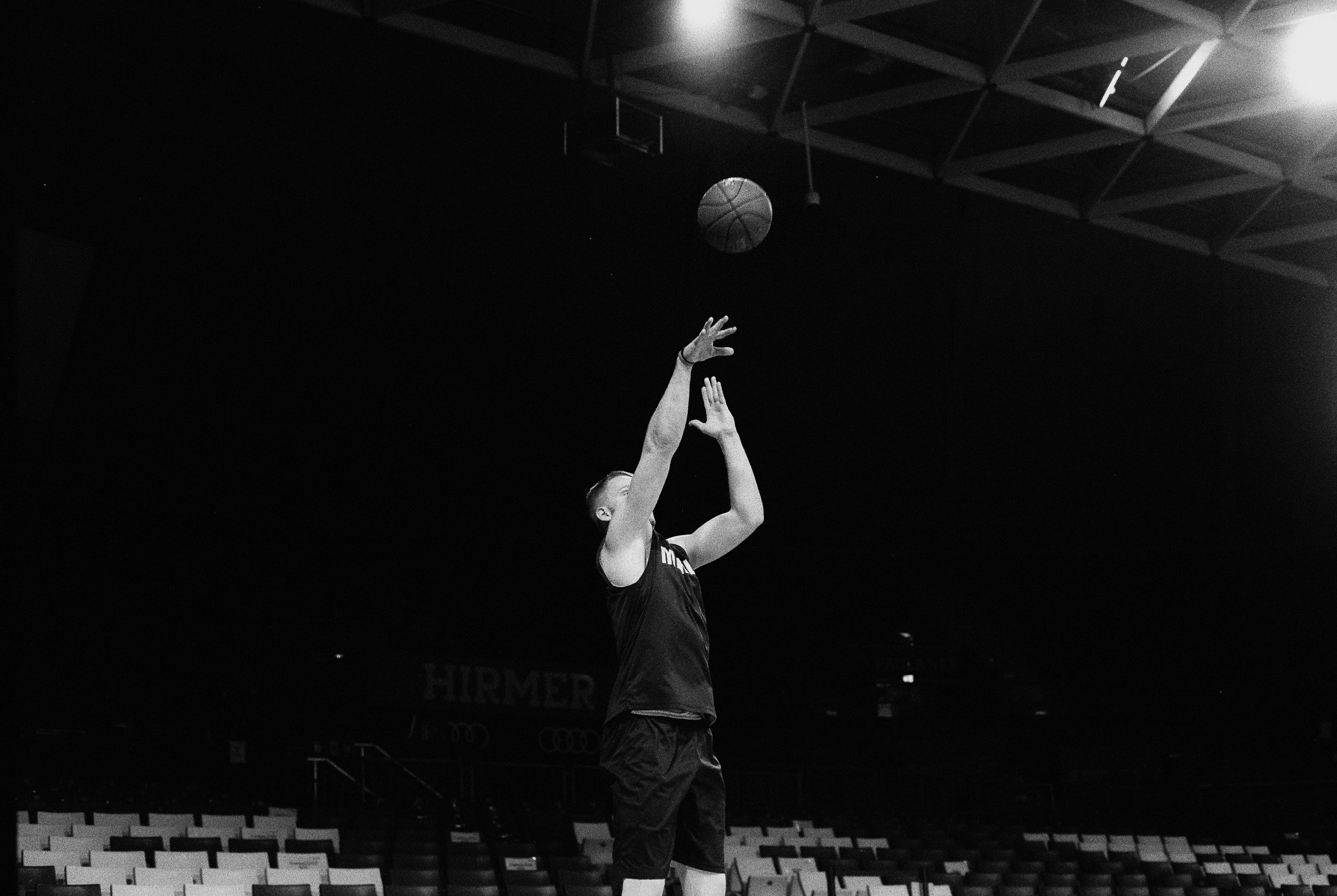 I felt so free during a tournament when shooting. No pressure, "just a free and personal project.“ Nobody waited for the photos, just myself wanted to capture very special moments in black and white. Photography with a timeless look and feel. Hotel life with 10 teams in quarantine felt like camping. Players from different teams played card games and table tennis, watched basketball games together and met at the indoor golf simulator.

I was part of the group, could take pictures almost everywhere I wanted to. 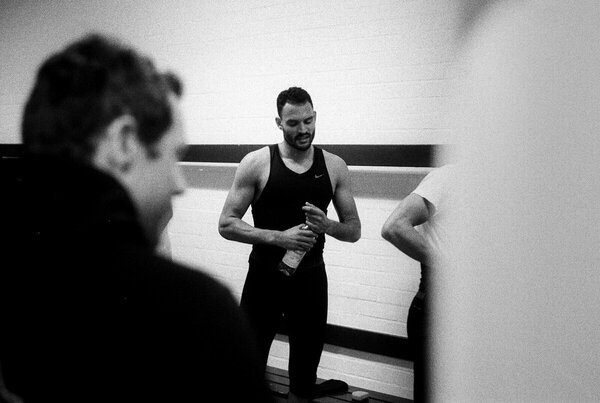 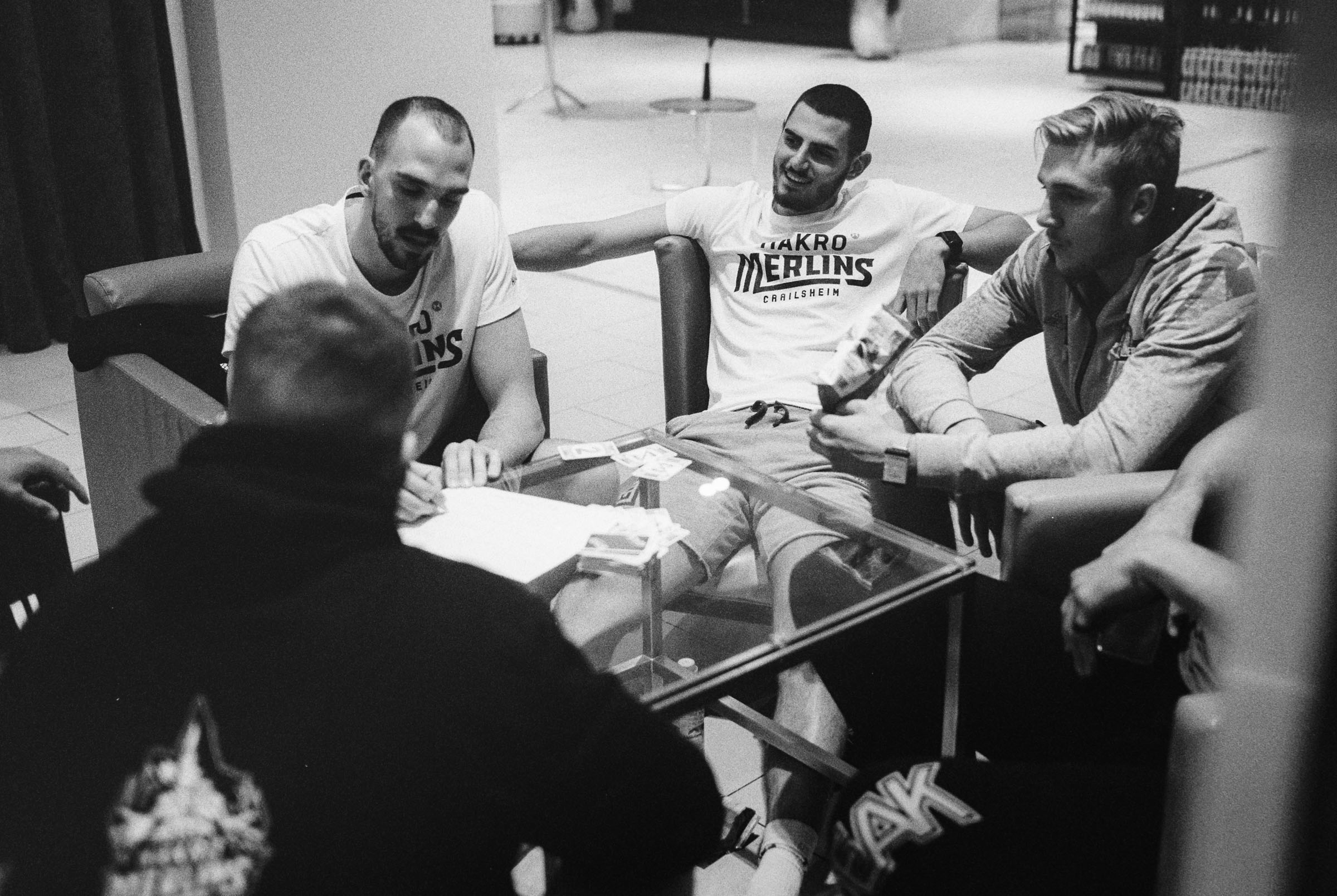 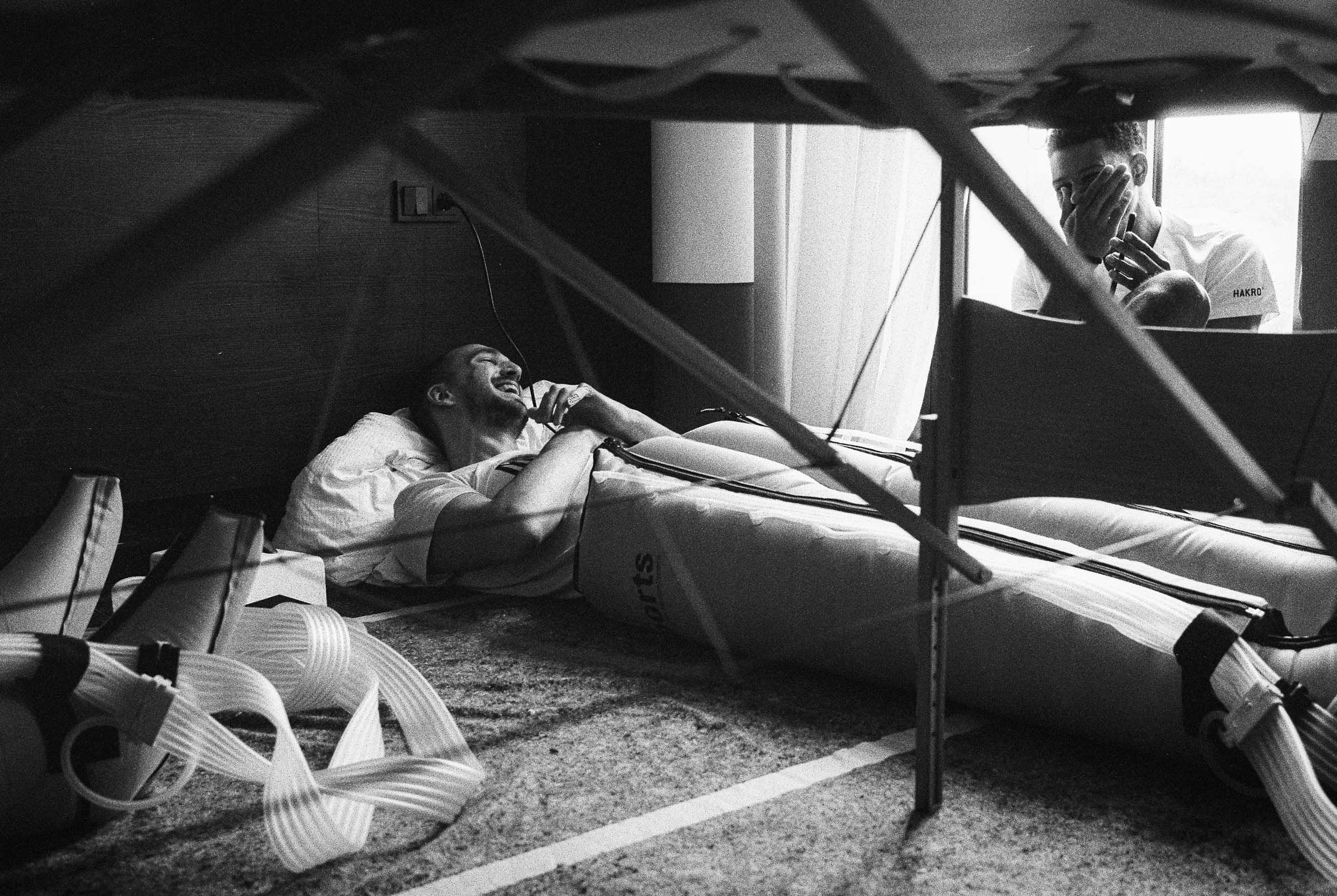 The Leica M6 TTL is a tiny and silent tool and absolutely inconspicuous. Loading the camera with a fresh roll of film happens within seconds. The selective metering though the lens is easy, fast and intuitive. 36 pictures on a roll seems perfect and the overall look of the pushed HP5+ was just pleasing to the eye. Even the players were fascinated with the feel of the pictures. ISO 1600 was perfect and various. The beautiful look of the grain gave those moments everything they needed. 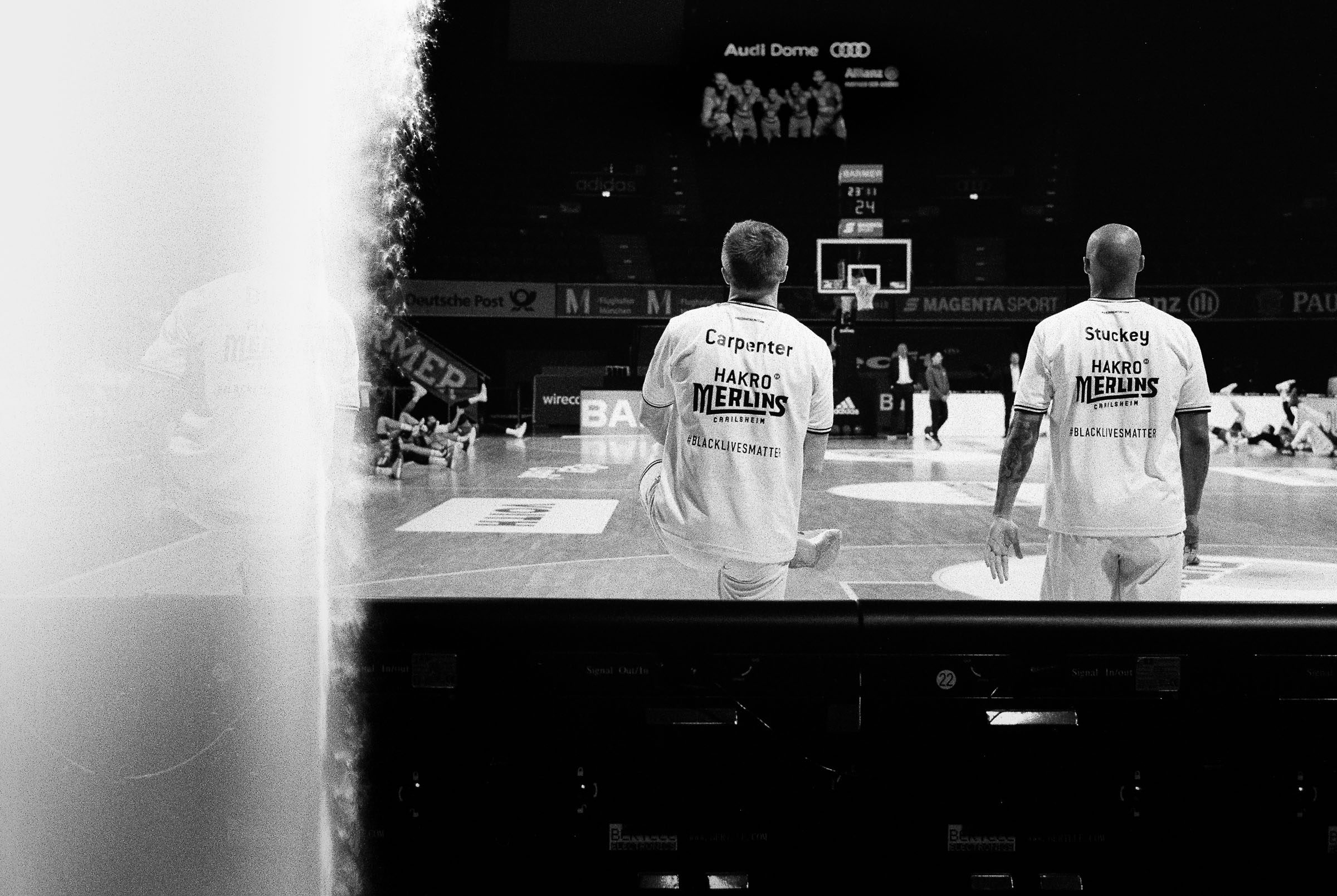 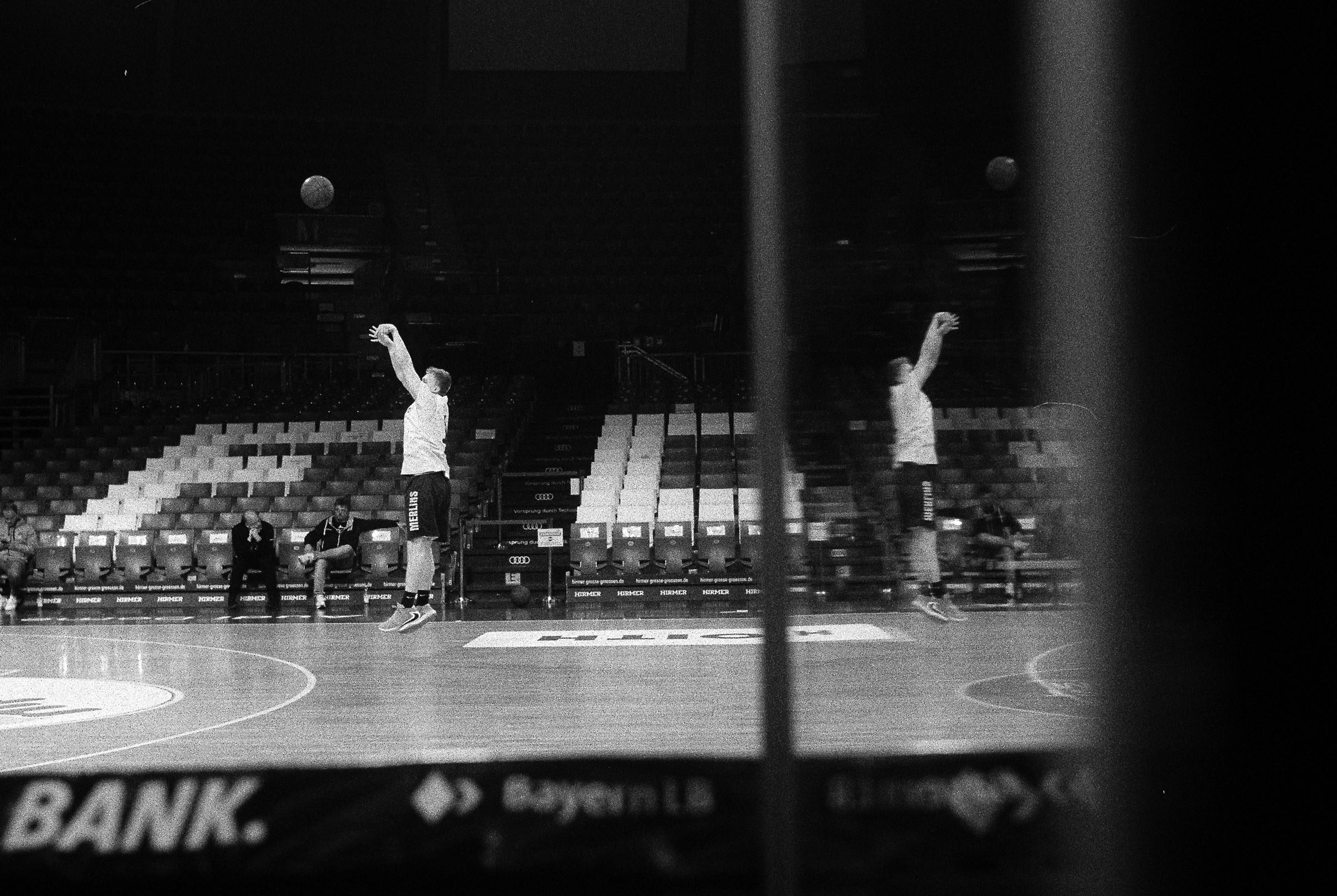 It’s always the same - You take your digital camera and try to shot as precise and selected as analogue but it’s never the same. The moment where the magic happens started always with the M6. I’ve been to countless practices and games and thought that I know the situations and moments but I was so super surprised when looking through the first contact sheets. So few pictures and almost every picture is on point. Never took two or three pictures of the same situation like I would digitally. 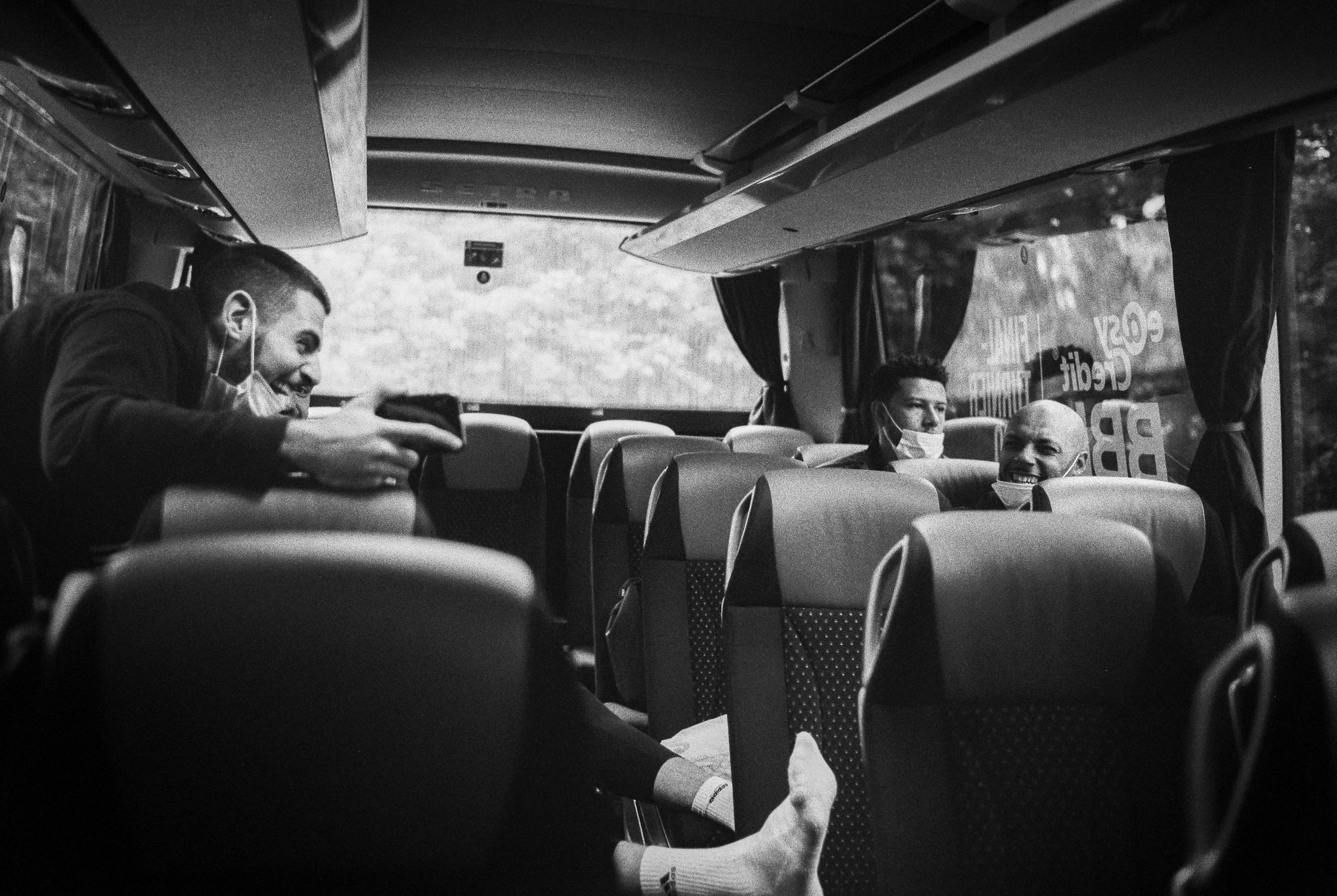 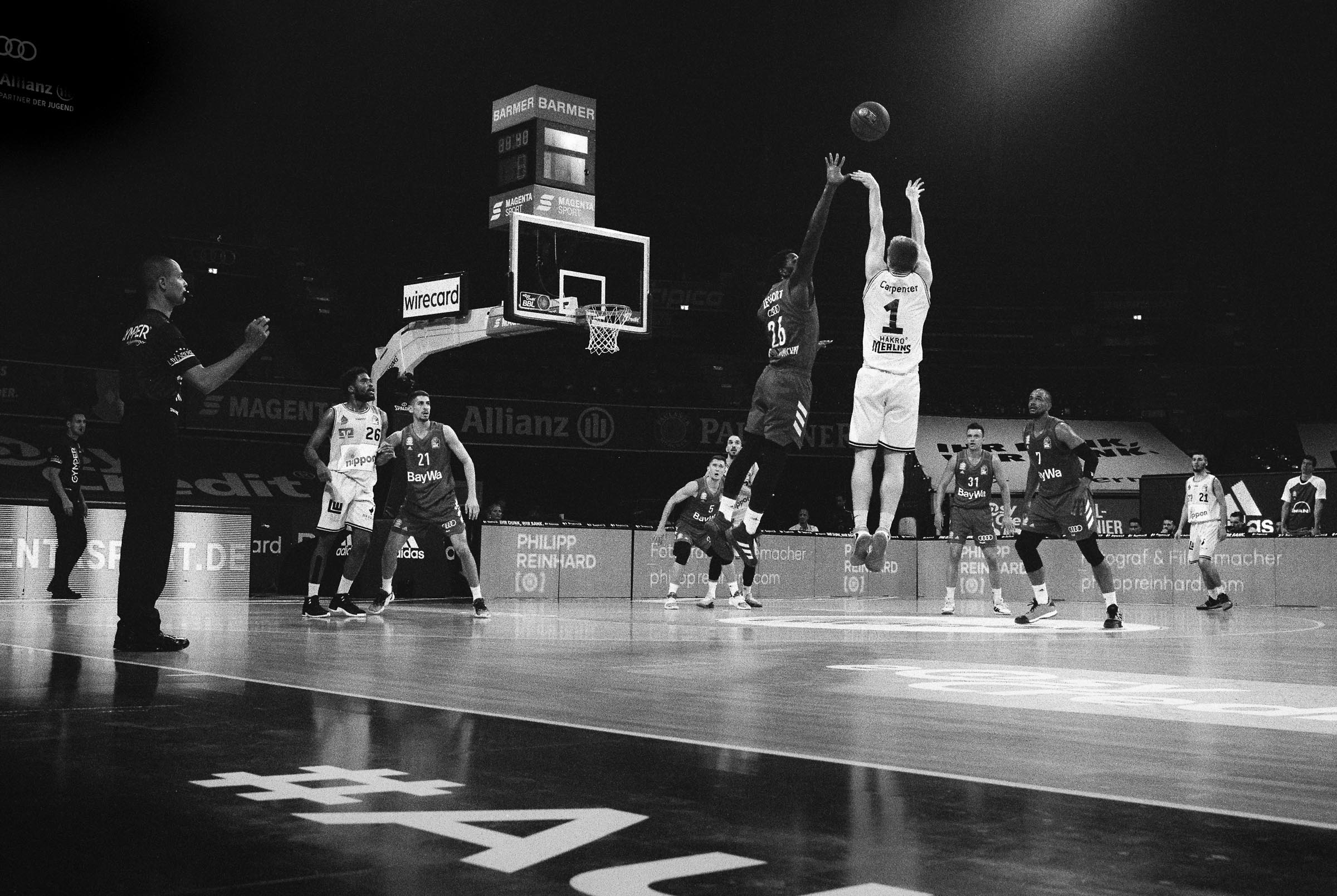 Since then I never left for a job or trip without some rolls of film.

I took a huge step as a photographer, had so much fun and learned again why I started to love photography so much. I totally followed my intuition and it turned definitely out to one of my absolutely favorite set of photos of the past years. It felt like I captured something which feels even more honest than digital photography with some special emotions in it. 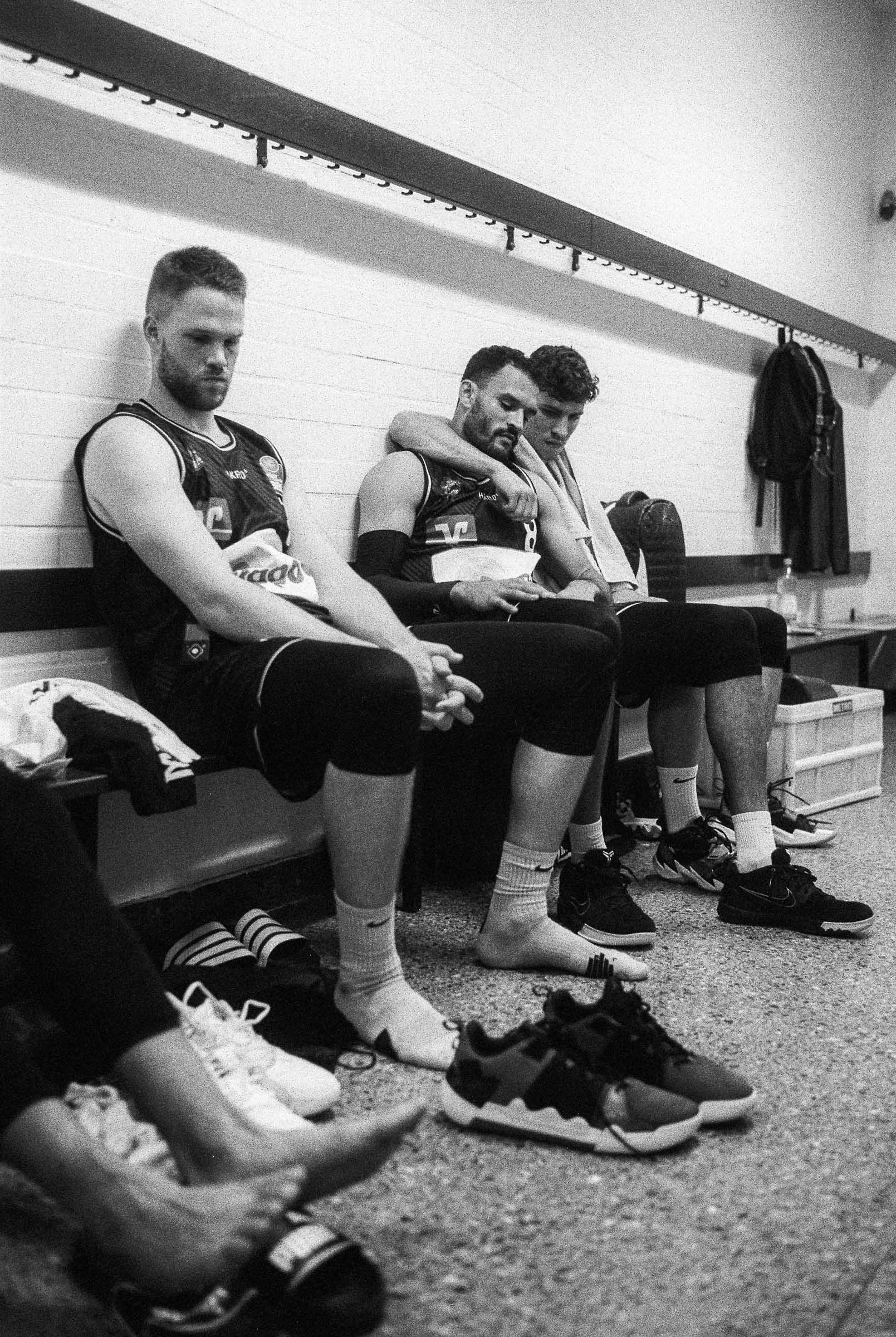 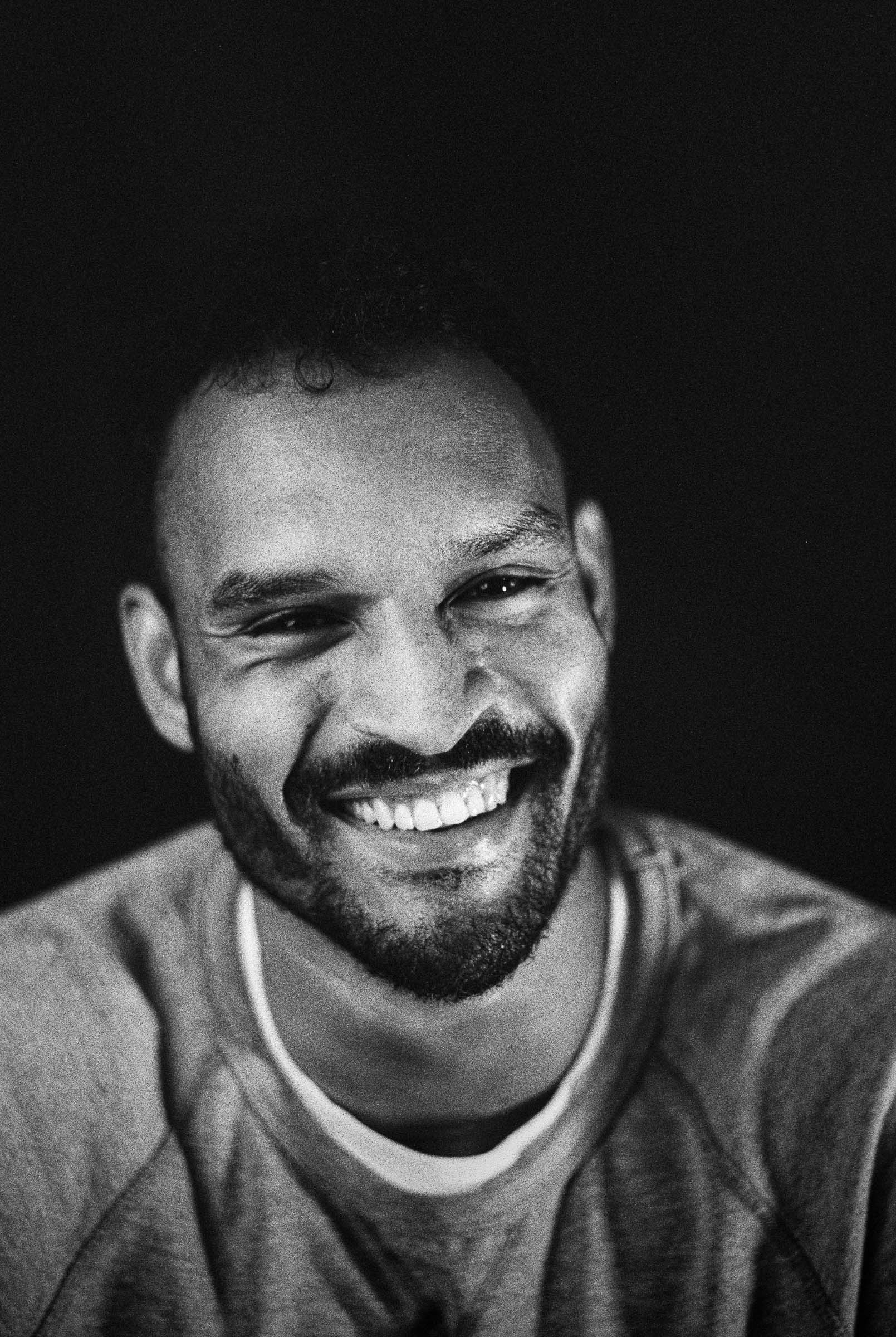 Philipp is German-born reportage and portrait photographer. He lives and creates in Berlin and in his hometown Bad Mergentheim. Philipp loves to shot film for more than half of his life with his Leica M6. He is always inspired to shot and see different situations and angles when shooting film.

We asked you to show us your #sprockets for our latest #ilfordphoto #fridayfavourites theme.  It's fantastic t...
Read More